140.6 miles for a cause: two Columbia residents take on Ironman race for pediatric cancer | Mid-Missouri News 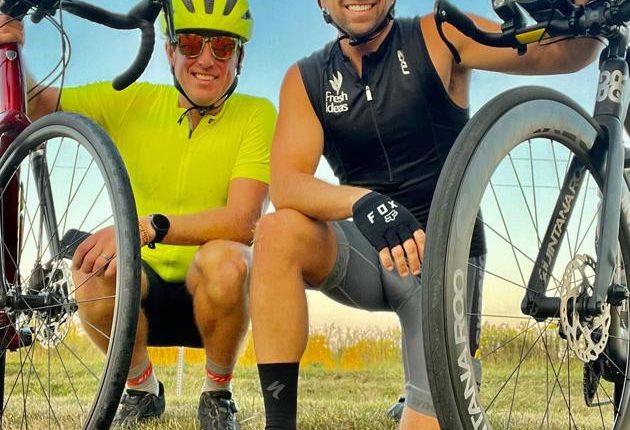 COLUMBIA — Every Saturday morning, George Zimny ​​and Bryan Hickey tie their shoes, get their bikes out of the garage, and get ready to run, bike, and swim for at least five hours.

The routine was plunged into a “COVID moment” that made the two think about how to spend their days in lockdown. It was during early morning practice at their neighborhood gym when the two decided to commit to completing an Ironman race.

“The crazy thing for us was that we’d never done anything more extreme than some endurance races, like long runs, maybe a 30-minute or 45-minute track race,” Zimny ​​said. “So we decided to take on the challenge and do it together.”

Together, the two started training with a bit of a learning curve.

“On the first day, [we] ended with a three-mile run, which was very hard to do,” Hickey said. “We didn’t realize how heavy our legs would be after that.”

George Zinney Training for the Ironman.

Training for the Ironman ranged from one hour to two hours for the friends during the work week. The two trained all winter and summer to prepare for the following year’s race.

By the summer, the two said they wanted to do something more with all the time they put into it.

Good luck! An email has been sent to with a link to confirm the subscription to the list.

Wrong! An error occurred while processing your request.

“We got to a point where it was all about us,” Zimny ​​said. “And to me, this felt like such a selfish thing to do.”

All the hours spent training and away from their families deemed the necessity of a higher purpose.

“There’s a local family here in the community, the Loos family. They have a little girl who had leukemia a few years ago,” Zimny ​​said. “The story is pretty amazing. Childhood cancer research literally saved this little girl’s life.”

Then the two found their goal for the training: to contribute to the #RallyforRhyan campaign. Jen and Brad Loos started the campaign when their daughter was diagnosed to raise money for childhood cancer research. Hickey knew Rhyan’s parents personally and said they were both touched by the investigation that saved their daughters’ lives.

“From the beginning of our journey of training for the Ironman, to now on a mission deeper than just ourselves, we are doing it for the Loos family and for childhood cancer research,” said Zimny. “It just opened our eyes to a much bigger cause and it pushed us to the end.”

The two are now just a week from race day and not far from their goal of raising $40,000 for childhood cancer research.

“It’s bittersweet that this long journey is kind of coming to an end, but I’m really excited to complete it,” Hickey said. “I think more importantly, just the impact we can have on children who have to go through that experience of coping with cancer.”

The two are also organizing a raffle for RallyforRhyan hats on Tuesday. Every $100 donation goes towards a spot in the raffle.

Thanks to George Zinny

Anyone who wants to donate to charity can follow this link.