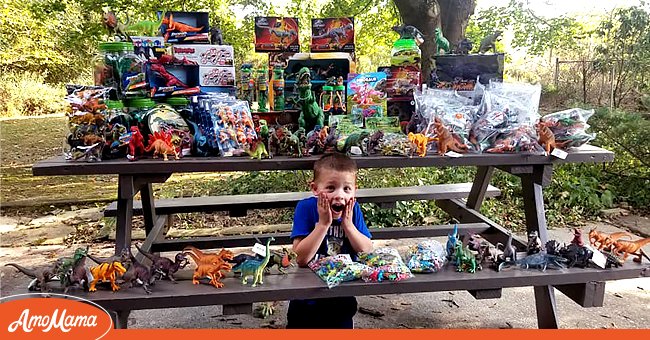 A child was asked by his mother what he wanted to give as a present on his fifth birthday. Surprisingly, he told her he didn’t need anything. He then donated thousands of toys to the hospital that had treated him.

A kind and considerate nature may seem normal to adults, but when the same feelings come from children, they can leave someone stunned and at a loss for words.

It is true that children tend to imitate what they see around them, and good parenting largely determines the kind of person they would become.

A 5-year-old boy from Pennsylvania inspires the world with his kind gesture. Weston Newswanger may look like any kid his age, but deep down he is extremely special and has a heart that cares and empathizes with others.

In November 2016, when he was just two years old, Newswanger was diagnosed with rhabdomyosarcoma, a very rare cancer that develops in soft tissue and is likely to spread to other parts of the body.

After his diagnosis, he was treated at Penn State Children’s Hospital for nearly a year and has now been in remission for about two years.

Shortly before his birthday, on September 26, 2019, Newswanger’s mother asked him what he would like as a present. The boy declined, adding that he didn’t want or need anything for his birthday. He then decided to make a donation. His mother told CNN:

“He [Newswanger] didn’t even have to think about it.”

Soon after, the little boy began collecting dinosaurs and Play-Doh and shared with his mother that he would like to donate them to the same hospital where he had received his cancer treatment.

With the help of his mother, he was able to collect the trinkets and be ready to share them with the patients at PennState Children’s Hospital. Newswanger shared:

Speaking of her son’s battle with cancer, his mother said that the toys, especially Play-Doh, had played a big part in keeping him occupied and easing his depression.

On the other hand, the hospital appreciated Newswanger’s thoughtfulness and thanked him for his generosity. A child care worker at the hospital also gave her opinion on the matter:

“Here at the children’s hospital it’s okay to be messy so we go through a lot of Play-Doh so this is a big, big help for us (sic).”

Indeed, it is never too late to spread kindness, positivity and hope in people’s lives because maybe that’s all they need in moments of sheer darkness and despair.

Texas pediatrics group ready to give COVID-19 shots to kids as early as Nov. 6