A firefighter donates 119 blood donor cards to children with cancer : The DONG-A ILBO 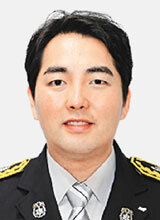 A firefighter in Busan donated 119 blood donor cards to help children with cancer. According to the National Fire Agency, Lee Seong-hoon of the Changseon 119 Safety Center visited the Nauem Center of the Korea Childhood Leukemia Foundation (KCLF) in Busan on Sept. 17 and donated 1,000 face masks that he and his colleagues prepared for children. with the blood donor cards. Lee started donating blood in 2001 to help a friend’s younger brother who suffered from leukemia, and has been doing so ever since.

In 2007, Lee registered as a donor with the Korea Marrow Donor Program. In January 2017, he received a call from the program that there was a leukemia patient with the same genetic factors as him and donated his bone marrow. Bone marrow stem cells make up less than 1 percent of the marrow mass, and the odds of matching those unrelated to blood are one in tens of thousands.

“Blood donation is a privilege that can only be enjoyed by people who are healthy,” said the 36-year-old firefighter. “I want to keep donating blood until I reach 200 and 300 times because it saves precious lives with small actions.”