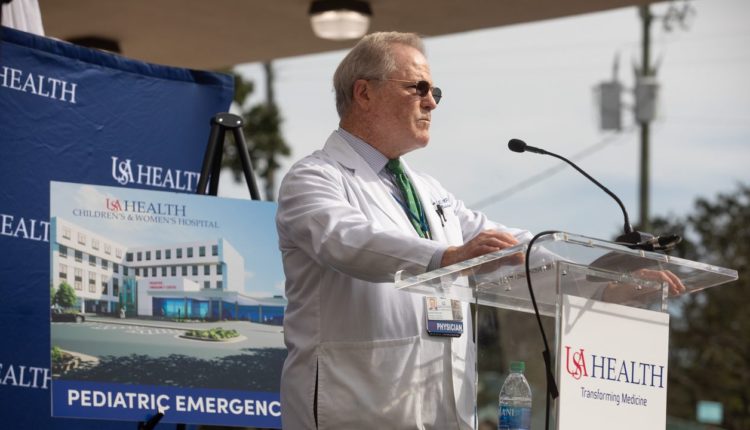 As they hit the ground running on Thursday for a major expansion of emergency facilities at USA Health Children’s & Women’s Hospital, USA Health leaders made some eye-opening comments about the system’s ambitions and explosive growth.

“These treatment rooms will be built and dedicated to the kind of patients we treat,” said Christopher Jett, hospital administrator. “We will have special behavioral health spaces, which we unfortunately need more of in this state, and we will have space dedicated to them that is safe for those patients. We will have isolation rooms for infectious patients, where they can be treated. We will have large medical rooms for traumatic injuries.”

dr. Edward Panacek, president of emergency medicine, said the center is both the culmination of a process that began with a harsh evaluation several years ago, and something that is paving the way for further medical education efforts.

That started to change in 2018 with the hiring of Dr. Larry Mellick, said Panacek. Since then, Mellick has ensured that the hospital meets certain standards of pediatric emergency preparedness, which was the second critical point. Meanwhile, Children’s & Women’s has hired additional board-certified pediatric emergency response specialists.

The third area where improvement was needed was the facility itself. In 1990, the University of South Alabama acquired the Doctors Hospital, which had been in operation since 1962, and began developing it as a site specializing in the needs of women and children; in 1997 it was renamed USA Children’s & Women’s Hospital. Though it has undergone major renovations and expansions, Thursday’s speakers said the emergency department was housed in rooms not designed for that purpose and not up to modern standards.

Panacek said the upcoming expansion would remove those restrictions, providing the staff with a state-of-the-art facility to work in and opening up new opportunities.

“Note the name,” he said. “This facility is called the Pediatric Emergency Center. That word center implies something broader, something deeper, something more extensive than an emergency room or a department.” One particularly promising role, he said, is the potential for training new doctors.

“The state of Alabama has a shortage of doctors in many areas and in many specialties,” Panacek said. “But perhaps nowhere is it clearest or sharper than in emergency medicine. The state of Alabama currently ranks last, 50th out of 50 states in the United States, in terms of the number of qualified emergency physicians per capita in the United States. State. Last of all. We have to fix that. There are only two emergency medicine training programs in the state of Alabama. … One of those two training programs is here in South Alabama. It is a relatively small and young program, it is less than two and a half years old, it is still growing.” The new center could provide new educational opportunities for students in that program, he said.

It could also become a site where residents earn board certification in pediatric emergency medicine, he said.

“There is only one relatively small training program for those individuals in the state of Alabama, in Birmingham, of course,” Panacek said. “We need another one. We’ve already outlined a new pediatric emergency medicine training program here at Children’s & Women’s, as part of this new pediatric emergency center, to help improve that situation and provide more qualified health care providers for the state of Alabama and for our region. We think those things will be transformative.”

Chris Jett, administrator of USA Health Children’s & Women’s Hospital, speaks at a ceremony to officially mark the beginning of a $15 million expansion of the Pediatric Emergency Center on campus in Midtown Mobile. Bill Starling

In recent years, both USA Health and Infirmary Health have rapidly expanded their facilities in Mobile and Baldwin counties. USA Health CEO Owen Bailey said the pediatric emergency center was part of a much larger effort.

“To put the expansion of this emergency center in context, it was part of a very significant expansion effort that we’ve had at USA Health over the past few years,” Bailey said. “I just want to highlight a few things that we’ve been through that are coming online during this period of incredible growth. Five years ago, we went from about seven care locations to … more than 20 locations in the region. That has created access points that were not there before.”

“We built the Mitchell Cancer Institute’s Fairhope facility and the Midtown clinic, which is not far from here,” he said. “We just opened an OB/GYN office on Old Shell Road. We have increased the capacity of the University Hospital by converting the 11th and 10th floors to: [add] more than 60 new beds, which are much needed. We have opened the Fanny Meisler Trauma Center [at University Hospital] in January and it was full on the first day. In a few months we will open a freestanding emergency department in West Mobile, which will also have a full range of imaging technology available. There will also be a professional office building adjacent to that detached emergency department on Hillcrest Road.

“We also understand the need for more health care in Baldwin County, and we already have several locations in Baldwin County,” Bailey said. “Next week we have another groundbreaking operation at the Mapp Family Campus, which will house a physician office building that will also have that full range of imaging and also an outpatient surgery center. We are also opening an OB-GYN office in Fairhope and we will be expanding the Mitchell Institute in Fairhope which is also a much needed expansion, including parking, and also an extension of the Mitchell Cancer Institute in Foley. There are a number of other facilities I could mention.”

Margaret Sullivan, the US vice president for development and alumni relations, said about $13.5 million had been raised for the work at Children’s & Women’s. Hospital officials said that amount did not include the kind of multimillion-dollar aid the state gave to USA Health University Hospital’s comprehensive trauma center, but it did include two $500,000 state grants.