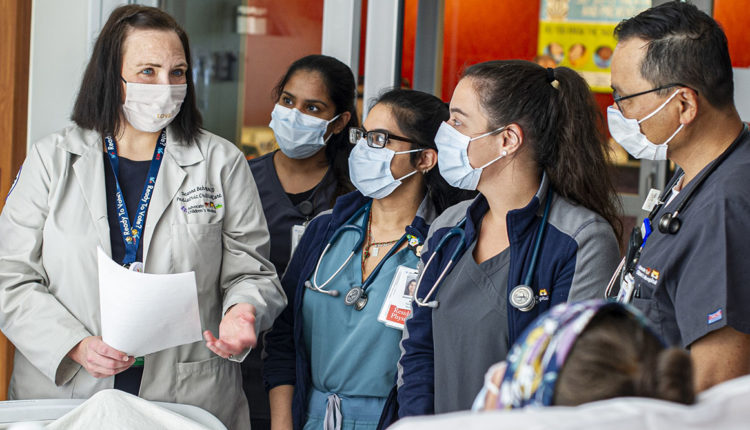 Weeks after the start of the new school year, fears have surfaced among doctors that the return to classrooms would fuel COVID-19 outbreaks among children – pushing more pediatricians into the cultural chasms of the pandemic by citing schools as spreaders and to require masks for students and vaccinations for staff.

Hospitals across the country are taking in more infected children than ever before, including many in intensive care units (ICUs) and on ventilators. In the third week of September, children accounted for nearly 27% of newly confirmed COVID-19 cases nationwide, according to a data analysis by the American Academy of Pediatrics (AAP) — an increase from the overall rate of about 16% during the pandemic. More than 200,000 pediatric cases were added during the week ending Sept. 23, the AAP notes, bringing the total during the pandemic to 5.7 million.

“This wave has without a doubt had the greatest impact we’ve seen on children and adolescents,” said Jim Versalovic, MD, PhD, interim chief pediatrician at Texas Children’s Hospital in Houston, which has diagnosed more than 200 new coronavirus infections in recent days. in children.

The wave is hitting hospital staff with new challenges: pushing ICUs near or overcapacity, delaying care for children with other conditions, complicating treatment due to co-occurring conditions, and visiting relatives who may also be infected.

The challenges are also emotional, as staff see children as victims of adult decisions to avoid measures to protect children from the disease. At the Medical University of South Carolina in Charleston, Elizabeth Mack, MD, chief of the pediatric intensive care unit, sighs and says:

“We have some kids on ECMO” – extracorporeal membrane oxygenation, which uses a lung bypass machine to pump oxygen into the blood of critically ill patients and remove carbon dioxide from the blood. “I just look at it and think, ‘This is all preventable.’ It tears my heart.”

In response, more pediatricians are publicly blaming spikes in schools not mandating vaccines for staff and masks for everyone — and asking them to implement those public health measures.

“There is evidence of transmission in the school environment,” Versalovic says. “We see more cases [adjusted for student population] in school districts without mask mandates.”

And eight doctors who work in pediatric intensive care units (PICUs) across the country wrote an op-ed for the Tribune newspaper group calling for protective measures, including wearing masks in schools and getting vaccines, to prevent the attack. which they see to limit at work. “The system is not designed to address this magnitude of preventable disease,” they wrote.

“A lot of pediatricians are stepping into this space because it’s so important. It affects the lives of their patients,” says Sara Bode, MD, a member of the AAP’s Council on School Health.

As school openings approached in August, doctors became increasingly concerned about how COVID-19 could spread among students due to a confluence of unprecedented circumstances: the delta variant swept across the country, many schools planned to go without mask mandates, many 12 to 18 year olds and teachers were unvaccinated and there was no approved vaccine for children under 12.

“School became a huge topic” of discussion on ID Listserv, where hundreds of doctors, pharmacists and other healthcare providers share information about treating childhood infections caused by microorganisms, says Jason Newland, MD, MEd, who oversees the project as a professor of pediatrics at the Washington University School of Medicine in St. Louis.

As communities publicly competed for mask mandates in schools (more than a dozen states banned the requirements), the AAP went in the opposite direction: In July, it tightened its “COVID-19 Guidelines for Safe Schools” to recommend that all employees and students over 2 years old wear masks at school, regardless of their vaccination status. One goal of the guidelines is to provide backup to pediatricians advocating for prevention measures in schools.

“They can say, ‘This isn’t just my opinion,'” says Bode, a pediatrician at Nationwide Children’s Hospital in Columbus, Ohio. “This is the guidance of thousands of pediatricians across the country.”

In the weeks after schools began opening, hospitals in many parts of the country were overwhelmed by the record number of children admitted for COVID-19. Florida, for example, already had a summer wave, “but with the start of school it got really hairy,” says Kenneth Alexander, MD, chief of pediatric infectious diseases at Nemours Children’s Hospital in Orlando.

While many factors contribute to the COVID-19 outbreak, studies released last week by the Centers for Disease Control and Prevention (CDC) show that recent outbreaks have been much more severe in schools where students and teachers are not required to wear masks. .

The correlation between school openings and the onslaught of childhood infections led CDC director Rochelle Walensky, MD, MPH to state in late August that “large-scale quarantines or large numbers of cases are generally occurring in schools because schools are not following our guidelines” for anyone aged 12 and over. and older to get vaccinated and “for everyone, now, to get masked” at school.

While most children with COVID-19 don’t get sick enough to be hospitalized, according to the AAP, hospitals report seeing more infected children than ever — and more with severe symptoms — occupying more beds and requiring more complicated care. .

Several children’s hospitals report that the most serious diseases mainly occur in children under 5 years of age and in older adolescents. (The youngest children seem to get the virus from parents or school-age siblings or daycare or kindergarten.) Ohio’s Dayton Children’s Hospital recently reached 98% of its bed capacity thanks to an increase in COVID-19 patients, including a 2 week-old suffering from respiratory symptoms, says J. Michael Klatte, MD, chief of the Division of Infectious Diseases. Klatte estimates that up to 40% of their recent COVID-19 patients have required time on the PICU.

Many of the younger children also bring new complications with them. Their initial respiratory problems indicate they have COVID-19, the potentially serious respiratory syncytial virus — which is booming in parts of the country — or both. That leaves doctors trying to determine which treatments to use, and children are more vulnerable to more damage if they have double infections.

“Both [the diseases] can cause a serious infection in the lungs,” says Kari Simonsen, MD, pediatrician-in-chief of Children’s Hospital & Medical Center in Omaha, Nebraska. “We’re really concerned about how those kids are going to do.”

Adolescent symptoms continue to resemble the often severe symptoms in adults, including heart and lung damage, Simonsen notes. In Dayton, Klatte notes that many of the adolescents have co-morbidities, such as asthma and obesity, that complicate their care and recovery.

Another complication of the increasing burden of children is figuring out how to safely visit patients, even in ICUs — a benefit often not afforded to adult COVID-19 patients for fear of spreading infection.

“For young children, it can be more dangerous to be alone because that parent can help them stay calm,” Simonsen says.

But, as Alexander of Nemours Children’s Hospital points out, “Where there is a child with COVID, there is an adult with COVID.”

Some hospitals have tightened restrictions on how many relatives are allowed to visit and how many can visit at once, and they require visitors to wear masks. Given the emotion of having a seriously ill child, Alexander says, family members sometimes try to exceed the restrictions — to the point where staff have called security to avoid altercations.

Doctors are frustrated – not only because of the overwhelming demand for medical care, but also because the children had little or no choice to protect themselves from the disease: they are in closed environments where people don’t wear masks and they are not old enough to vaccinated or their parents have chosen not to have them vaccinated.

“I have not yet treated a vaccinated child” for COVID-19, Simonsen says at the Children’s Hospital in Omaha — echoing the assessments of several other hospitals.

“They suffer for things adults don’t,” says Deanna Behrens, MD, a pediatrician at Advocate Children’s Hospital in Park Ridge, Illinois, and the lead author of the op-ed in the Tribune News Service syndicate. (She says the doctors reached out via the Twitter hashtag #PedsICU.)

To stop the spread of COVID-19 among children, pediatricians are increasingly trying to change adult decisions. Among the efforts and reactions of the past few weeks:

In Wisconsin, nearly 500 doctors signed an open letter urging schools to introduce mask requirements and other preventive measures. “We see school districts making terrible decisions” by not requiring masks and keeping appropriate distances, pediatrician Amy Falk, MD, one of the signatories, told a local radio station. A growing number of school districts across the country are mandating masks as student infections rise, and doctors are pushing for the requirements, such as the College Community School District in Iowa, which had previously rejected such a measure. Pediatricians and teachers held a public event urging South Carolina state lawmakers to repeal a measure banning mask requirements in schools. father and son hospitalized with COVID-19 at the Medical University of South Carolina — the teen spent two weeks on a ventilator — became public advocates for the vaccinations they once dismissed as unnecessary. They told their story to TV news crews at the hospital, urging everyone to get vaccinated.

Mack, who was also an author of the syndicated op-ed, says doctors there wanted the father and son not to be infected — but as more adults speak out about infections they’ve seen in children, “hopefully we can do more killing and havoc.”