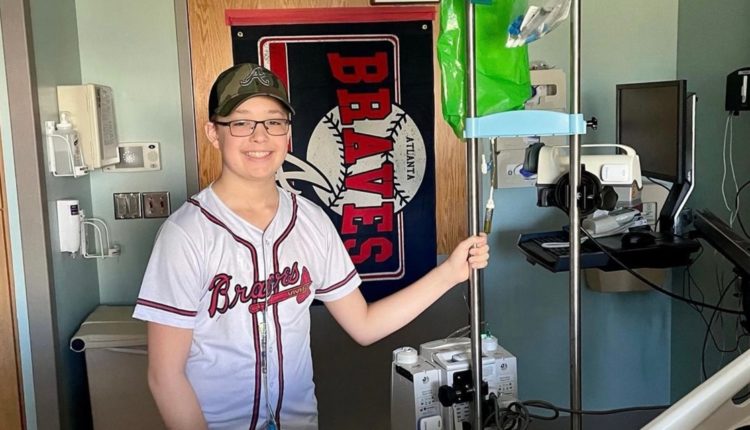 “It was consistency at a very difficult time in our lives,” Jacob’s mother said. “To win the World Series it almost felt like it was for Jacob.”

ATLANTA — A longtime Atlanta Braves fan at Children’s Healthcare of Atlanta understands what it feels like to take on challenges, and the months of games leading up to the big World Series win have held special significance for Jacob Bannister this year.

“I’ve always been a Braves fan since I was born,” Jacob told 11Alive. “And I knew we would come a long way in the postseason.”

Jacob can’t even guess how many Braves games he’s seen over the years.

But just as the baseball season kicked off this year, Jacob began to get sick and was diagnosed with leukemia with months of intensive treatment ahead of him.

But there was one constant for Jacob and his family through the rollercoaster of diagnosis and treatment: Jacob’s love for the Atlanta Braves.

His team pride was constantly on display at the Aflac Cancer and Blood Disorders Center at Children’s.

“It helped,” Jacob explained. “Just to help me think of something else. It’s just so amazing. The one year the Braves won the World Series is the hardest year for me.”

There’s a #1 Braves fan behind this door… Jacob is ready to cheer on the @Braves in Game 6 of the #WorldSeries! pic.twitter.com/EtDD319UNS

For Jacob, the post-season run was a perfect distraction and even brought some surprises.

Jacob got the chance to throw the first pitch at a game in September, on behalf of Children’s Healthcare of Atlanta, and after a social media post from his mother went viral, he even got a trip to the World Series.

This is when I told Jake he’s GOING TO WORLD SERIES!! Of course he hugged his dog and not his mother! We…

His mom said the season helped their family through their worst times as they watched the Braves give their best.

“It was consistency at a very difficult time in our lives,” explains Kelly Sailer.
“And to be a constant build-up to the World Series, and then to win the World Series, it almost felt like it was for Jacob. It gave us a lot of joy.”

“I don’t know how to put it into words,” Jacob said. “I just can’t believe the Braves won the World Series.”