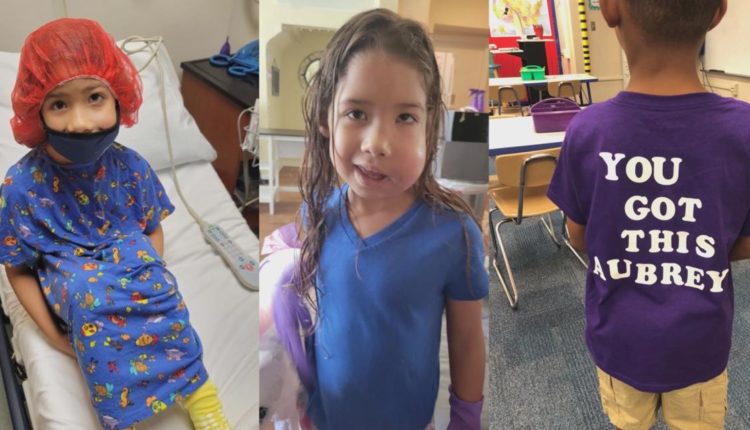 Seven-year-old Aubrey Romero had surgery to remove a malignant dentinogenic ghost cell tumor. Her classmates had raised $3,175 by the end of school on Friday.

BRADENTON, Florida — Teachers and students at Sea Breeze Elementary School in Bradenton have donned purple clothes and accessories for a special day.

“I’m at the doctor, they wear purple day today, Friday is purple day,” Aubrey Romero said via FaceTime. Aubrey was at a doctor in Miami with her mother while waiting for a scan.

The 7-year-old has had a rare cancerous ghost cell tumor that weighs on her big smile.

Known scientifically as a malignant dentinogenic ghost cell tumor, it started out as what Aubrey’s parents thought was a tooth infection.

After several visits to the dentist and antibiotic treatments, her case was referred to a specialist who found out how serious the situation was.

“Her face swelled up, it went into her optic nerve and they were able to operate on the ghost cell tumor. It was a long, long ordeal and then they had to reconstruct her face,” said second grade teacher and Aubrey’s teacher, Lori Schumaker.

Schumaker said doctors had to remove Aubrey’s gums, parts of her teeth and lip to get the tumor out. However, multiple scans that followed showed cancer cells near the little girl’s brain and skull. Now, according to Schumaker, Aubrey faces months of radiation and possibly chemotherapy.

The new development has provoked her school friends into action with Aubrey Day. It’s a day when they go out to honor their friend and raise money for piling up medical bills, all dressed in purple.

“Why do we dress purple because we support Aubrey,” said Elizabeth, a classmate.

“It’s Aubrey’s favorite color,” Crimson, one of Aubrey’s friends, said. She said Aubrey made her pink beaded bracelets at the hospital.

Schumaker launched the fundraiser, which was largely driven by students in her sophomore grade and the school in general. The children share Aubrey’s story with their families and in places like the church.

The students made posters and donated $1 or more to support Aubrey. One girl said she raised $10 at home.

Donations also come from parents and the community. By the end of school on Friday, students had raised $3,175. Some students told 10 Tampa Bay they wanted to raise $30,000 because they know Aubrey’s mom can’t go to work because she has to stay in the hospital.

“The children feel involved, the children have had the feeling that they had a place in this and they are involved,” says Schumaker.

The students also had messages they wanted to share with Aubrey. The entire third-grade class wrote notes on strips of cards and stapled them into a paper chain. The messages ranged from words of encouragement to messages of hope to simple thoughts and prayers.

“How much we miss her and how much we love her,” Geriam said.

“We have written to her and one thing that is very special to us is that she is in our hearts and we are praying for her,” Crimson added.

“We’d love to come back soon, we miss her so much,” William said.

Also Aubrey can’t wait to reunite with her friends and get back to the normal activities she loves, like reading and taking a break.

“I miss you. Thanks for wearing purple and I love you Mrs. Schumaker,” Aubry said.

“I love you too, Aubrey,” Schumaker replied, fighting back tears.