BASEBALL TEAM TAKES PART IN ON MY TEAM16’S “THE CLIMB” 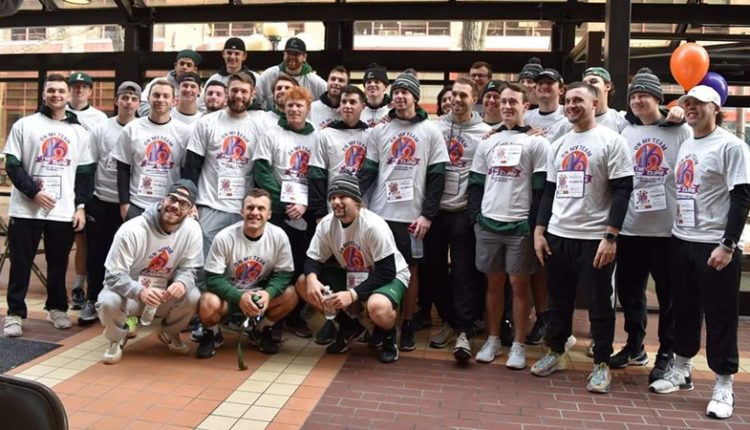 Syracuse, NY – Several members of the Le Moyne College baseball team attended a charity event on Saturday morning, hosted by On My Team16. The Dolphins were among 170 climbers who took to the State Tower in downtown Syracuse to climb 20 flights of stairs and raise money for childhood cancer, as part of this year’s ‘The Climb’ organized by the organization On My Team 16 .

On My Team16 is a non-profit organization that raises money to help children dealing with childhood cancer. The organization was founded by Jordan Zapisek, sister of former Dolphin baseball player Jack Sheridan ’21. Sheridan was diagnosed with leukemia in May 2014, during his sophomore year of high school. Three and a half years later, he was able to beat cancer and fulfill his dream of playing college baseball.

The baseball team members felt a strong impulse to participate because of their connection to Sheridan. Many of the current members of the team shared the field with Sheridan during his time as a dolphin. The team also saw this as an opportunity to give back to the community and support an organization that is doing great work for children fighting this disease.

Graduate student and catcher Drew Fureno has been on the receiving end of many of Sheridan’s pitches throughout his career and got to know Sheridan and On My Team16 very well.

“The Climb was a great event for the team and the Syracuse community to come together and support such an important and impactful cause. On My Team16, it constantly reminds us of how lucky we are with our health and gives us the opportunity to give back to the families and children who are going through the most difficult parts of their lives. We can show them that they are not fighting this disease alone,” said Fureno.

“The Climb” is the largest fundraiser for the organization and also serves as a way to honor a child who battled cancer, as some floors are decorated in honor of those children. New to this year’s event was the Carry a Kid program, where climbers can carry a backpack filled with meaningful things from a child who is currently battling cancer, beating cancer or sadly losing the battle against cancer.

Senior Jacob Maser (Chittenango, NY/Christian Brother Academy-Syracuse) honored Sheridan by carrying his backpack, which was filled with a picture of Jack, his high school glove with an orange ribbon representing Leukemia, his high school baseball jersey school, a couple of baseballs and a five-pound weight, because Sheridan wanted to give Maser a little extra challenge.

“It was a great feeling to be able to carry his backpack, to know what Jack went through and what it meant to him. Even though he couldn’t be there, someone was still carrying him up the stairs,” says Maser. .

Sheridan graduated last year and is currently studying law at Baylor University, which is why he was unable to attend.

Maser has been involved with On My Team16 since 2017, after he met Sheridan through high school baseball, where they were teammates at the Christian Brothers Academy in Syracuse.

“Jack used his Make-a-Wish gift to renovate our high school baseball field and put in a large batting cage. Hearing his story was truly inspiring to my family. When we got to know Jack and his family, we wanted to we’re helping out with On My Team16, knowing it’s for a good cause and how much help it can be for kids going through similar things Jack did,” Maser said when asked about his involvement with the organization.

The Le Moyne baseball team has been involved with On My Team16 since Sheridan’s arrival at The Heights. Head baseball coach Scott Cassidy has come to know Sheridan and the organization over the course of his career.

“Jack is the inspiration for On My Team16 and is part of our Le Moyne Baseball family. What they are doing for the children and families in our community, going through cancer diagnoses and treatments, is amazing,” said Cassidy.

Senior Drew Carroll (Clifton Park, NY/Christian Brothers Academy-Albany) was the fastest member of the team to climb the 338 steps and the second fastest climber overall. He finished the race in just two minutes and 14 seconds, just ten seconds behind the first finisher.

“I’m very proud of our boys because they want to participate in this event. It means a lot to them, as it’s the deciding factor for some of them. It’s a great event that the boys look forward to every year and show our support to both the organization and the families going through difficult times,” said Cassidy.

Weighing the accuracy of Tanner staging