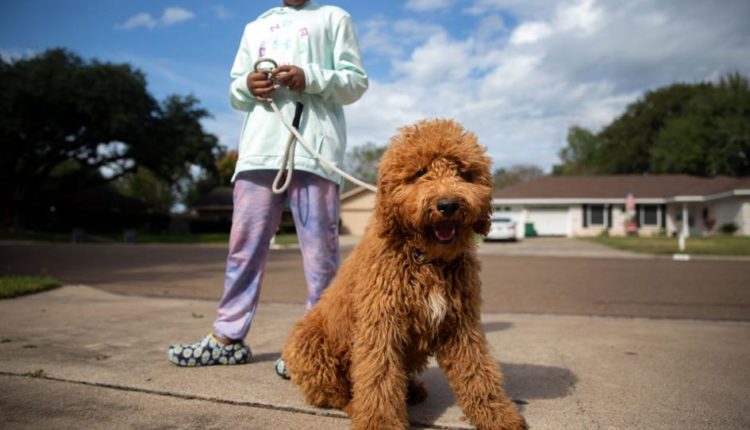 Keimryn Lee, 9, is just like other kids. She smiles. She sings. She plays basketball in the front yard and rides a scooter through the cul-de-sac where she lives.

What makes Keimryn different is that in April, as the number of COVID-19 cases declined and life appeared to be returning to normal, Keimryn was diagnosed with osteosarcoma, a bone cancer common in children and young adults, and her family renewed precautions. for the health.

On November 2, with approval from the Food and Drug Administration, the Pfizer COVID-19 vaccine was officially recommended for children ages 5-11 by the Centers for Disease Control and Prevention, bringing a small sigh of relief to Keimryn and her family.

On Tuesday, Keimryn received her first dose of the vaccine.

“I was scared,” said Keimryn, who emphatically doesn’t like needles. “But it didn’t hurt.”

However, she said she wouldn’t be afraid to get the second shot, “if (she) has the same nurse,” who her mother also highly praised.

A day and a long night’s sleep after the first shot, Keimryn enjoyed herself overnight at the Houston Zoo, where she was honored in a portion of their winter light show that recognizes osteosarcoma patients.

“You couldn’t say she has cancer if she had hair on her head,” said Askaskia Hobbs, Keimryn’s mother. Keimryn lost her hair due to the chemotherapy she underwent. “She has her ups and downs, of course, but 99% of the time she’s laughing and joking.”

Their family was already taking careful precautions around COVID-19 before Keimryn’s diagnosis, Hobbs said. She worked as a medical assistant at Victoria NP Clinic, conducting COVID-19 testing on residents during much of the pandemic.

Like many medical professionals, she had a system she followed when she got home from work to protect her family: park in the garage, take off her work shoes, walk barefoot straight to the bathroom, shower, change clothes, and only then her daughters could embrace her.

“It was stressful. I don’t even know how to put it into words,” Hobbs said. “We try to protect ourselves because of our families, but on the other hand, we know we have to do our job to protect the community.”

When vaccines first became available, Hobbs had no intention of getting vaccinated, she said. She thought she had come this far without getting COVID-19, why did she need the vaccine? But something inside her told her to get it.

“I don’t know if it was God, or what it was,” she said. “In April we get Keimryn’s diagnosis and it was kind of a light, like, well, that’s why you had to get the vaccine, for her protection.”

Since the diagnosis, they have had to take extra precautions. Family members must be tested before entering the home. Keimryn has had to make the switch to a virtual school. And Hobbs has quit working at the clinic to stay home and take care of Keimryn, help her with her homework, and take her to Houston for her treatments. The family still wears masks inside.

Keimryn has a treatment plan that requires her to travel to Texas Children’s Hospital in Houston for chemotherapy every Tuesday, which can lower her immune system, making even a cold a danger to her.

“I know a lot of people say a mask won’t prevent you from getting COVID, but the way I look at it now is that before COVID, cancer patients wore masks to stay protected,” Hobbs said. “And they’re protected against any illness, whether it’s a stomach flu, or a cold, or the flu. Masks somehow work.”

When the Pfizer vaccine became available for children ages 12 and older, Hobbs’ 13-year-old daughter, Keiynanh Lee, told Hobbs, “Mom, to protect my sister, I’m going to get the vaccine.” And all summer long, Keimryn kept asking Hobbs when she might get the vaccine.

Keimryn’s battle with cancer has already had its ups and downs. Her cancer has metastasized and spread to other parts of her body, Hobbs said. She also needed an internal prosthesis placed on her left thigh.

But there are also victories. The doctor said she would never run or even walk again, Hobbs said. Three months later, she regularly takes her therapy puppy, Oscar, for short walks down the cul-de-sac and shoots basketball in their driveway.

While her body is fighting the cancer, Keimryn has never lost her spirit or sass, Hobbs said. If Hobbs expresses too much concern for her or tries to babysit when she unpacks her scooter, Keimryn rolls her eyes and continues on.

“I hate being on this journey,” Hobbs said. “But I wouldn’t take another child with it. Her attitude has been great throughout the journey.”