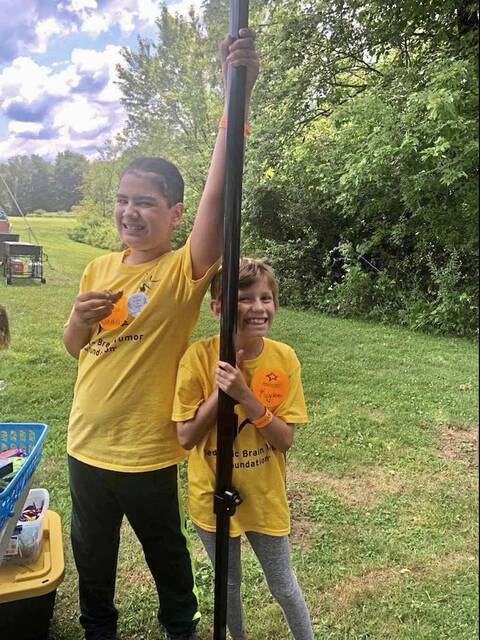 Sean Rovers and Kaylee Kruise met during radiation treatments for brain cancer at UPMC Children’s Hospital of Pittsburgh in Lawrenceville.

They’ve been through many of the same experiences, from IVs and blood tests to surgery and pain.

It was during their time there that the youngsters found out that they had a birthday – December 23.

The coming one will be tough for Rovers, who turns 14. Kruise fought bravely against the disease. She died on February 12, 2021.

“It isn’t,” said Rovers’ mother, Maria. “Cancer has robbed Kaylee of us. I believe we were supposed to meet Kaylee. We are doing everything we can to honor Kaylee’s memory and ensure she is never forgotten.”

Sean Rovers said one of his fondest memories of his friend was when his family visited her at her home in Altoona.

It’s hard for Sean Rovers to talk about Kruise. He tries to keep moving forward, because she would like to. Sean Rovers and his mother created Smiles from Sean, an organization that makes kits for sick children. It started with smiley face pillows and now includes bright yellow bears and other items to brighten the day of young people undergoing medical treatment.

They send out packages year round and will start raising funds for the Easter packages after Christmas.

Smiles from Sean donated a check for $7,100 to the Child Life Department Fund at UPMC Children’s Hospital in Pittsburgh. The money was raised with assistance from the Bethel Park Interact Club, an organization that participates in fundraising and community service projects, and through coin collections in the Bethel Park School District and surrounding community, local businesses, and the Rotary of Upper St. Clair Bethel Park.

“When you’re in the hospital, it’s usually a stressful time, but this is a happy day,” said senior Sarah Goldenberg, vice president of the Interact Club on the day they donated the money. “We love how passionate Sean is about putting a smile on other people’s faces.”

Junior Melina Stewart said Sean Rovers brings energy to the group. She said he is an inspiration.

Maria Rovers said the long-term goal is to continue to grow and help fund cancer research.

Sean Rovers was diagnosed with a rare brain tumor on October 22, 2017 at the age of 9. His cancer is a type of CNS sarcoma called intracranial myxoid mesenchymal. He had his first brain tumor resection on October 24 and was in the hospital for two weeks. The tumor returned, requiring a second surgery and radiation.

Sean Rovers is getting an MRI this month. The surgeries affected his brain function, his mother said.

“We are still hoping for a miracle,” said Maria Rovers. “We are doing everything we can to help him reach his full potential.”

“Sean and his family are a beacon of hope for all of our families struggling with childhood cancer,” said Dr. James Felker, assistant professor, pediatric neuro-oncology program, UPMC Children’s Hospital of Pittsburgh via email. “They show you can get through the unimaginable, come through the other side smiling and giving back. We are eternally grateful to them for their support of our program.”

Maria Rovers said they were in touch from the moment she met Kruise’s mother, Melissa.

“We all knew what the other was going through,” said Maria Rovers. “If you know that someone understands, you will get through difficult times. I’m sure Kaylee is looking down with a smile, knowing Sean is still there and talking about their cancer story. I hope other families will be inspired by their story. We want people to always remember Kaylee.”

Smiles from Sean partnered with Kruise’s Caring for Kaylee foundation to buy electric wheels – toy cars that kids drive – and gift cards for the oncology patients receiving medical care there.

They needed new drive wheels because the old ones were worn out. Sean Rovers and Kruise drove the cars when they were there for treatment.

“My heart is broken,” Melissa Kruise said. “It means a lot that Sean has included us in the powerwheels and gift card donations to the hospital. If we can help these children and lighten the burden of cancer by giving them some joy, it will mean a lot to us. I love that he and Kaylee share the same birthday. They will be connected forever.”

JoAnne Klimovich Harrop is a Tribune-Review staff writer. You can contact JoAnne at 724-853-5062, jharrop@triblive.com or via Twitter.