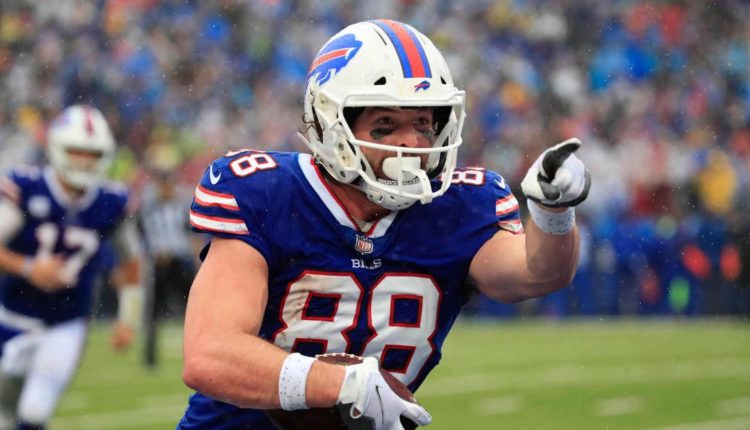 Buffalo Bills tight end Dawson Knox (88) points to fans as he scores a touchdown during the fourth quarter.

After the Buffalo Bills’ 40-0 win, Dawson Knox wore a shirt for POINT Pediatric Cancer Collaborative for his press conference.

Knox announced last week that he will do more with the organization, which provides support and opportunities for children affected by cancer and their families.

“Hey #billsmafia‼️” tweeted Knox, “I am so excited to announce my initiative for this NFL season, ‘Knox Sox’ for (POINT Pediatric Cancer Collaborative).”

Knox donates $1,000 for every touchdown and $100 for every catch. He finished Sunday with five catches, two of which were touchdowns to give him a career-high four so far.

He also sells socks, through the company For Bare Feet. From every pair of socks sold, 20% of the proceeds go to PUNT, which also provides socks to patients.

“Right now they’re just wearing the generic, gray, non-slip socks that hospitals give them,” Knox said in a video on Twitter. “So this is going to be a great way to give them something colorful, something fun, so they feel like they have their own, while putting them on every day.”

Knox’s relationship with the organization has expanded over several seasons. The Bills sold fanboxes last year in partnership with various players, with a portion of the proceeds going to the player’s favorite charity. Knox also attended a luau in his hometown of Nashville last summer to raise money for the partnership.

Trey Mancini is more than MLB’s ‘face of cancer.’ The Orioles star looks forward to proving it in seasons to come.