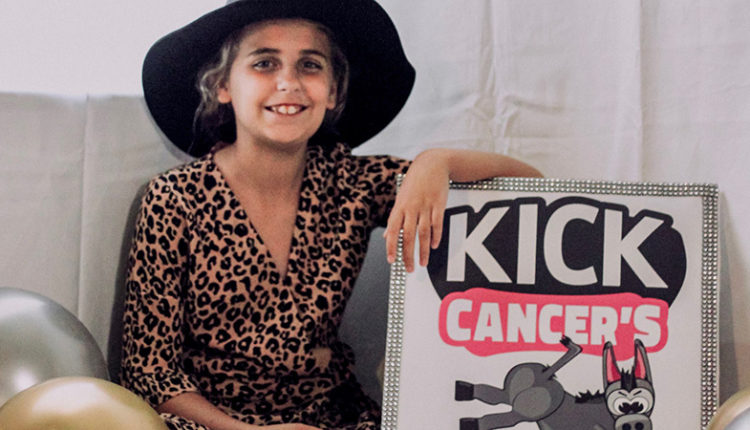 MEMPHIS, Tennessee – Bella Resweber will have a tumor removed from her brain next week.

It is the last serious measure facing the 10-year-old Dutch girl this year, as constant headaches and vomiting led to the discovery of stage 4 cancer.

The prognosis and treatment plan are unknown as medical officials work to determine if the cancer — the rare pinealoblastoma — has spread to other parts of Bella’s body.

Working for the benefit of the CO Middle School student is a loving family, a will to persevere, and a talented treatment team made up of experts from Texas Children’s Hospital in Houston and St. Jude Children’s Research Hospital in Tennessee.

Bella and her mother, Nichole Resweber, are now in Memphis, Tenn., and could be there for as long as a year.

Nichole Resweber grew up in the Netherlands and moved to Buffalo, NY after graduating.

She lived there for 14 years, during which time Bella was born.

She stayed close to her family in Texas, visiting them every year before feeling the urge to return home in early 2021. She had moved back to Southeast Texas in June.

After the move, Bella, who complained of headaches, loss of vision and vomiting in the morning.

Knowing something was wrong, Nichole made an eye appointment, at which point a medical professional immediately advised Nichole to take Bella to Texas Children’s Hospital.

They arrived on October 20 and did not leave until they were on their way to St. Jude.

Testing of exposed fluid that accumulated in Bella’s brain, causing pressure in her head. A tumor was discovered in the center of Bella’s brain.

“We had to have surgery right away,” she said. “We had to take that pressure off that was causing headaches and blurred vision. We had to take a biopsy of this tumor because it didn’t look right.”

The first surgery was a success, and follow-up pathology on Oct. 27 indicated stage 4 cancer called Pinealoblastoma.

“It’s a very rare, very aggressive cancer,” Nichole said. “Less than 1 percent of children are diagnosed. My heart just stopped. You just don’t believe it. You look at your child and they look normal, all right, but here she is with stage 4 cancer.”

Bella Resweber is seen last month at Texas Children’s Hospital for surgery. (thanks to photo)

With so many questions, Nichole reached out to St. Jude to explain her daughter’s situation. Hospital officials called back the next day and told daughter and mother to come to the facility to begin the treatment process.

She was told that St. Jude treated an average of two cases of pinealoblastoma per year.

“We packed up and moved to Tennessee,” Nichole said. “We will be here for treatment for nine months to a year. They will undergo surgery on November 16 to remove as much of the tumor as possible. Then we have to do six weeks of radiation and five months of chemotherapy.”

St. Jude officials want to determine if and how much the cancer has spread this week.

Nichole said her daughter has stayed strong, noting that not a single tear has been shed.

“She kind of understands what’s going on, but I don’t think she understands the gravity of what’s happening because she’s so young,” Nichole said.

“She struggles the most with being away from her best friend. She knows this is the best place for her. We talked about it, sat down and did some research. I don’t think she fully understands what she’s going through because she has no idea.”

Nichole reports on Bella’s medical trip via Bella’sFightXoXo Facebook page, and a gofundme.com page has been set up under “Battling Brain Cancer with Bella” to help with associated medical and travel expenses.

Most importantly, Nichole is asking community members to keep Bella in their prayers.

“With this surgery, she will lose her vision, which will be quite affected for some time due to the type and location of the surgery,” Nichole said. “The surgeon said, ‘We’ve never had a child who completely lost his sight. It’s always been temporary.’”

Nichole said her daughter misses her family the most, noting that she spent most of her free time in the company of loved ones.