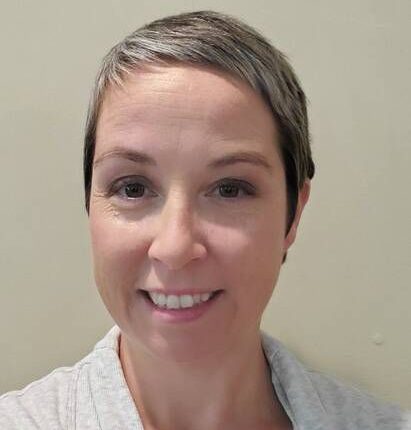 Melissa Ostroskie first found a lump while performing a self-exam in April 2020.

Now, more than a year and a half later, she has had a double mastectomy, chemotherapy and reconstructive plastic surgery. Now that her ordeal is over, Ostroskie says the thing that saved her situation is early detection.

Ostroskie, a mother of two from Wyoming, is only 40, an age young for breast cancer but not unheard of, said Dr. Jacqueline Oxenberg, a Geisinger surgical oncologist who was part of the team assembled to help Ostroskie.

Ostroskie told the Times Leader that it was a regular self-check that started her medical journey.

“I actually figured it out myself,” she said. “I found a lump during a breast self-exam in April 2020. And from that visit, I had called my GP and let them know I had found a lump and they ordered me for a mammogram and ultrasound.”

After a follow-up appointment six months later, in October last year, Ostroskie said her doctors had ordered a biopsy. Just a short time later, she discovered that she had been diagnosed with invasive ductal carcinoma.

Ostroskie said she chose to have a double mastectomy last November, even though only one mass was found.

“I chose the double mastectomy at the beginning to avoid other recurrences,” she said. “Not that it will be permanent, but for my own peace of mind so I don’t have to get mastectomy all the time.”

She then underwent 12 rounds of chemotherapy, beginning in January this year, lasting more than three months. Finally, in September, she underwent reconstructive plastic surgery.

Ostroskie said she chose silicone implants because she felt they would be less traumatic than other forms of plastic surgery that use their own tissue. Oxenberg also said Ostroskie underwent a newer type of mastectomy, one that preserves the patient’s nipples, unlike other types that often lead to their removal.

“So now I’m done with everything,” she said, with a hint of relief in her voice.

Ostroskie and Oxenberg both said that if there is a lesson to be learned from Ostroskie’s story, it is the importance of early detection.

Ostroskie said she has had some candid conversations with her children, especially her 9-year-old daughter, about listening to their own bodies since her cancer.

“I say, ‘If you find something that’s not right, let me know so we can be okay,'” she said.

Ostroskie said it was scary for her kids when she was first diagnosed; she said she recently lost a brother to pancreatic cancer, and her children, especially her 6-year-old son, struggled to understand that her prognosis was more hopeful.

“For my children to hear that their mother had cancer was very frightening for them,” she said. “They thought I was going to die.”

She said she bought them books that explained the situation better to help them understand what happened to their mother.

Oxenberg agreed that the “take-home message” is the way she presented the information to her children about the importance of early detection.

“I think that’s a strong message that we’re trying to send out as a system,” she said. “People don’t know what their risk factor is unless something like this happens to someone close to them.

“Listen to your body, do what you think is right,” she continued. “If you catch it early, your chance of a cure is extremely high compared to other cancers.”

Oxenberg said the tumor Ostroskie had wasn’t particularly aggressive, so it’s good they caught it when they did, before it became a bigger problem.

“I expect she’s fine,” Oxenberg said of her patient.

A Newborn With a Mass on the Brain

Study finds US pediatric COVID-19 cases are higher than expected