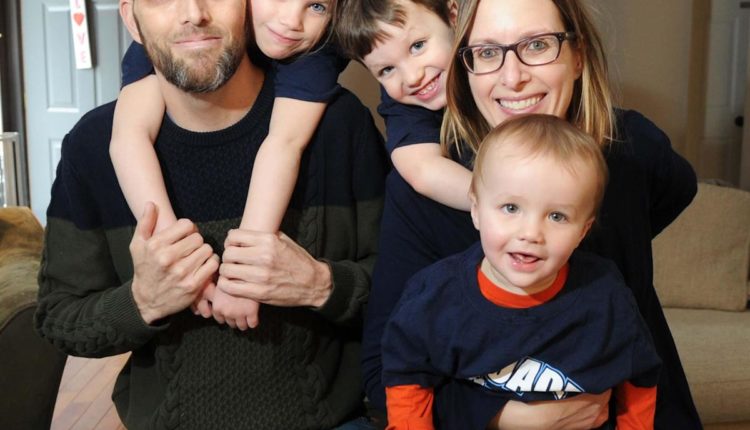 BRIDGEWATER – Last year, Bridgewater couple Richie and Lindsey McQuade found out they were both suffering from cancer just months apart.

The news was devastating and they had just moved into their new home with their three children: 7-year-old Julia, 4-year-old Tommy and 2-year-old Jameson.

With the help of friends, family and their community, the couple held their heads high.

Richie and Lindsey McQuade posed for a photo with their three children Julia, 6, Tommy, 4, and Jameson, 15 months, at their Bridgewater home on Saturday, February 27, 2021 after both parents were diagnosed with cancer. Richie passed away on October 31, 2021. Lindsey is in remission.

But about five months ago, the family discovered that Richie’s cancer had progressed further than the doctors had realized. He planned to have surgery that might give him more time, but his healthcare team decided the risks outweighed the benefits.

“He fought so hard,” said his niece and close confidant Heather Demita. “He would have done literally anything to get better. But after that, he’s never been the same.”

Richie continued chemotherapy to give him as much time as possible. But on the morning of October 31, he finally lost his battle with cancer.

While Richie’s family is devastated, there are some lights in the dark for them.

Lindsey has finished her treatment and her cancer is in remission.

Richie and Lindsey McQuade posed for a photo with their three children Julia, 6, Jameson, 15 months, and Tommy, 4, at their Bridgewater home on Saturday, February 27, 2021 after both parents were diagnosed with cancer. Richie passed away on October 31, 2021. Lindsey is in remission.

And even though Richie suffered, Demita said he still found something to be happy about. She said he couldn’t be more grateful for the support the family received through their GoFundMe, through donated meals and groceries, and for all the kind words.

“Every day he was able to communicate and talk, he said how much love and support they received,” Demita said. “There were so many people who never met them a day in their lives, delivering groceries and knocking on their door.”

To date, the family’s GoFundMe has raised more than $52,000, although they are still raising donations.

Demita said the money has gone a long way toward supporting the family, not only helping with medical bills, but also helping them keep track of their mortgage, pay for childcare for their children and pay for health care for Tommy. , who has his own health problems.

Lindsey and Richie McQuade posed for a photo with their three children, Julia, 6, Tommy, 4, and Jameson, 15 months, at their Bridgewater home on Saturday, February 27, 2021 after both parents were diagnosed with cancer. Richie passed away on October 31, 2021. Lindsey is in remission.

“The messages, their prayers and their kindness – it made things just a little bit brighter for Richie to know that the family was being supported because that was his biggest thing was he was concerned about the kids and Lindsey,” Demita said. .

“But the community outreach in the town of Bridgewater, in Brockton and the surrounding areas is like no other.”

Richie’s death has shocked the McQuade family, but there are a few messages they want to send to the public.

First, Demita said, she hopes Richie’s story will remind others of the importance of early cancer detection.

“If you feel sick, say something. Go to the doctor,’ she said. “It’s so important, and it really, really, really makes a difference.”

Second, Demita said she is working on setting up an organization to help children who have lost parents, especially since Richie herself lost his parents to cancer at a young age.

But most of all, Demita wants people to remember how much Richie loved his family and how much effort he put into taking care of others.

“On the West Bridgewater” [Facebook] page, people were talking about him, telling stories about him coming to their house and making their heating in the middle of winter and trying not to take any money,” she said.

‘He was. If you needed anything Richie was there, no ifs and buts about it.’

Demita wants to make sure the community knows how grateful Richie was and how grateful the McQuade family is for all the ways the community has supported their family. She said it is a reminder of how many good people there are in the world.

If you want to help the McQuade family, you can donate to their GoFundMe here.

Enterprise staff writer Susannah Sudborough can be reached by email at ssudborough@enterprisenews.com. You can follow her on Twitter at @k_sudborough. Support local journalism by purchasing a digital or print subscription to The Enterprise today.