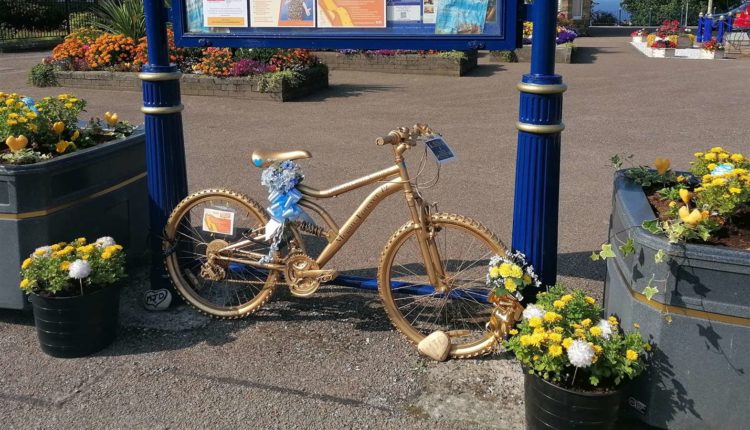 The golden bicycle in memory of Gemma’s daughter in Cluny Square, Buckie.

As part of the campaign, over £3500 was raised for the child cancer charity Calico.

Buckie resident Gemma Dickie, who was instrumental in the fundraiser, also placed a gold bicycle in Cluny Square in honor of her daughter who lost her life to cancer.

She was pleased to see many local businesses joining the campaign by turning their store windows gold for the month.

“We were completely blown away by the community’s efforts,” Gemma said.

“My main goal for this month was to raise awareness. We didn’t know the signs and symptoms of it. If by helping even one family with an early diagnosis this month, that’s exactly what we want to talk about.

“The only other thing I can say is that I and my family cannot thank the local community enough. I hope to continue to glow with gold annually, starting September next year.”

There is already a gold bike honoring Gemma’s daughter in Aberdeen that has been there since 2019, but this year she wanted to place one closer to home.

“It was this year that I thought it would be fun to put one in Buckie to raise awareness,” Gemma said.

“You know childhood cancer is a taboo topic. People don’t like to talk about it because you just can’t ever imagine it will happen to you. Knowing the early symptoms can be the difference between life and death. That’s why I wanted to put Glow Gold in Buckie.”

The aim of the campaign is to make the color gold synonymous with childhood cancer during awareness month, just like the pink ribbon that represents breast cancer.

There are currently around 19 gold bicycles in Aberdeen alone, each representing a child who has lost life to cancer.

Many shop windows in Buckie were decorated with gold like this one.

For all donations, activists nominate the charity of their choice. This year, Gemma chose Calico, which has been around since 1983.

Calico helps families with the financial difficulties associated with a cancer diagnosis. They cover the entire Northeast and the Highlands and operate entirely through the work of volunteers.

Calico Committee member Karen Arnold said: “Buckie’s fundraiser has been great. It’s a close-knit community and Gemma really has a lot of people on board.

“When we went up, we saw that a lot of stores had their windows done in gold. It was just phenomenal what has been done in Buckie this year.

“All the money we get goes to help families, so we’re extremely grateful to Gemma and the wider Buckie community.”