Cancer diaries: Her novel way of sharing her journey 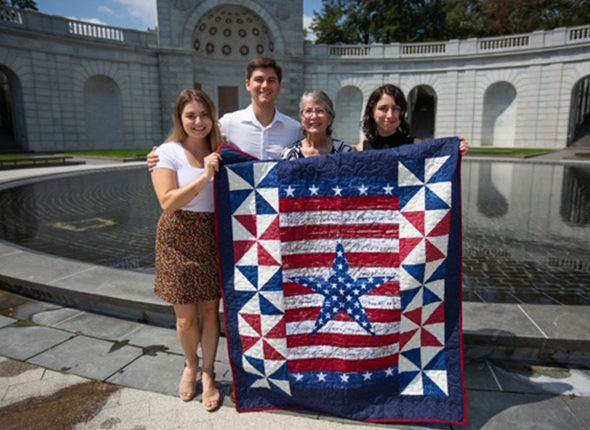 Jeannette Minnich, center, with her daughter, Venetia, right, son, Jonathan, left, and his girlfriend, Abby Bacardi, far left, this summer in Washington, DC. Minnich received the quilt from Quilts of Honor at a ceremony honoring her artwork that she calls her “cancer diaries.” Photo courtesy of Jeanette Minnich.

Art is a creative outlet and opportunity for expression. Whether it’s about one’s joys, sorrows, beliefs or fears, art is a form of communication that cannot be expressed in a message on Facebook or on a phone call.

For retired U.S. Air Force Colonel Jeanette Minnich, her editorial cartoons — a reflective collection she calls her “cancer diaries” — have allowed her to express the emotions associated with a cancer diagnosis. Her art chronicles her cancer journey for loving — and persistent — friends and relatives. As a bonus, it helped Minnich discover joy and humor during a crushing time.

Struggling with an unexpected cancer diagnosis

In 2017, during a routine colonoscopy, doctors found a cancerous tumor in Minnich’s colon. She was told it was an early-stage tumor and it was surgically removed shortly after.

Two years later, Minnich went to her new doctor at UCHealth because of a persistent cough. She thought she had allergies, but a chest X-ray showed multiple spots in her lungs. Her previous colon cancer had spread to stage 4.

“Dr. Kemme told me from the start that we can slow its progress and do what we can, but we can’t cure it.”

When cancer spreads to multiple sites, treatment can shrink cancer for a while, reduce symptoms and extend life, but with so many cancer cells present, they become resistant to all treatments currently available to eliminate it, Dr. Douglas Kemme, medical oncologist with UCHealth cancer care and hematology clinics in northern Colorado.

It was devastating news for Minnich and Don Ellis, her husband of more than 30 years, and the rest of her family, including their daughter Venetia, 26, and son, Jonathan, 24.

“If you’re sent away with an unexpected diagnosis, you’re reaching out to those around you who’ve had cancer and undergone treatment, and that’s exactly what happened,” Minnich said.

She accepted much of the advice she received from her environment, added her own experiences and began etching the experiences on paper.

Art as a therapeutic outlet during cancer treatment

After her first chemotherapy session, Minnich’s cartoons soon got to her.

In a comic strip, Minnich is in blue jeans and a red top, smiling and holding a cup in the air. “I’m here for my port,” it reads. The next panel shows Minnich lying in a bed, her shirt collar pulled down. A person in green scrubs and a mask puts a ‘port’ in her upper chest. It says, “Tell the concierge, I’m VERY disappointed!”

“Making the cartoons was something my husband encouraged because I needed to find some joy,” Minnich said. “It seemed like for my mental health, when I started chemotherapy, trying to find humor in the situation would be good for me.”

UCHealth provides mental and physical health resources for patients during and after their cancer journeys. The goal of patient-centered cancer care is to take a patient’s concerns away from the complexities of cancer care so they can focus on getting better. Nutritional services, financial and emotional counseling, and support groups are part of comprehensive care. Social workers also help patients connect with community resources, including financial aid, while patient navigators serve as patient advocates and educators. Access to integrative medicine, which provides evidence-based interventions such as acupuncture, yoga, and massage, is also available.

Minnich took advantage of some services, but at home she used art to promote her own well-being and inform others about her journey.

Another comic shows Minnich washing her hands after chemotherapy, which caused neuropathy. “Eek! Cold water!” The next one shows her holding a spoon. “Eek! Cold spoon!” In the next panel, she sees her pulling down the sheets to get into bed: “Eek! Cold sheets!” In the last panel, Minnich wears a long crystal blue dress and holds her arms outstretched in a familiar “Elsa” pose from the Disney movie Frozen. It reads, “I am absolutely NOT Elsa.” An Asterix expands her thought and reads: “The cold really bothers me.”

Minnich found that making art helped her forget her problems.

Finding joy in pastime during treatment

Minnich had always loved drawing, but her “practical parents” encouraged her to pursue a more stable career. Wanting to see the world, she enlisted in the United States Air Force in 1978 after graduating with a communications degree from California Lutheran University. She continued and obtained a master’s degree while stationed in various places. She taught at the Air Force Academy in Colorado Springs, where she met her husband and became a stepmother to three children.

She spent most of her military career as a public affairs officer, using her artistic skills to create posters or line drawings for newspapers. She was stationed in many places, including Japan and Washington, DC

As a mother, she enjoyed scrapbooking when she was not busy with Cub Scouts, Brownies, band amps, and serving on parent committees. Minnich retired after 24 years in the Air Force and moved to Loveland, Colorado. She remained active in the Church, singing in the choir, and helping with vacation Bible camps.

Jeanette Minnich is on display with her son Jonathan and daughter Venetia for her art at the Military Women’s Memorial Gallery at the official entrance to Arlington National Cemetery in Arlington, Virginia. Photo courtesy of Jeanette Minnich.

Using art to communicate with others in a difficult time

Minnich has built lifelong friendships throughout her Air Force career and travels the world.

“I have many friends on Facebook from all stages of my life,” she said. “I wanted a way to let people know what’s happening without it getting scary or very technical.”

She started posting her cartoons on her Facebook page.

“I got a lot of positive feedback: ‘Thank you for letting us know what it’s like going through this process,’” explains Minnich. “And it also helped people discover what kinds of things would be useful.”

Every few weeks, Minnich posted a personal cartoon detailing where she was with her treatment and/or how her condition might have changed, or when nothing had changed.

“Forcing myself to look at the humor in my situation and have the time to draw, I move from worry and anxiety to pleasure,” she said. “And it was something that helped (friends and family) understand my cancer journey. Anytime you feel like you’re helping others understand a terrifying disease that affects so many people, it’s a good thing.”

Her friends noticed – one in particular.

Artwork on display at the Military Women’s Memorial Gallery

Retired Lieutenant Colonel Cynthia Scott-Johnson had served under Minnich when the two were stationed at the Pentagon. They kept in touch via Facebook.

Scott-Johnson co-founded Uniting US, a non-profit organization dedicated to inspiring, empowering, and uniting the veteran community through the healing power of the arts. She was inspired by Minnich’s cancer diaries and asked to share them in her “Summer with the Arts” exhibition, which featured work by veterans from around the country in the Military Women’s Memorial gallery at the official entrance to Arlington National Cemetery in Arlington, Virginia.

In addition to sharing her art on Facebook with friends and family to communicate her cancer journey, Jeanette Minnich’s art was also part of the Uniting US “Summer with the Arts” exhibit at the Military Women’s Memorial gallery this summer. Photo courtesy of Jeanette Minnich.

With the help of her daughter Venetia, Minnich conveyed her work on posters displayed in the gallery. Before the exhibit ended in late September 2021, Minnich, Ellis, and Venetia headed to Washington, DC. The couple met her son, Jonathan, who works in Washington.

“I had been to Washington several times in the past five to six years to see my son, but my daughter hadn’t been there since first grade. And none of us had seen the Women’s Memorial,” Minnich said. “It was a good opportunity to let them know and appreciate the contributions of women to military service, which is so often behind the scenes and hidden.”

Minnich also attended the ceremony to acknowledge her and 49 other artists from the exhibition. She was offered a quilt made by the Quilts of Honor veteran group.

Since the ceremony, Minnich has worked in other media. She recently unveiled a bronze statue of a dancer, which now adorns her garden.

“As you can see, she’s on a treble clef because dance is music that’s personal to me,” Minnich said. “When I listen, especially classical music, my brain dances choreographers all the time. I was pretty bad at ballet, but I’m totally charmed by the grace and expressiveness of the dance form.

“I know we don’t really know what heaven is like, but I hope to dance beautifully there.”

The reality of incurable cancer weighs heavily on Minnich’s mind. Using art to express emotions has helped and the cancer care program counseling services have also helped her and her husband.

“Being diagnosed with cancer has made me more aware of seeing and communicating with friends and family,” she said. “While I don’t always appreciate what I have ‘in the moment’, my life has been very blessed.”

Where in Central Texas can you get a pediatric COVID-19 vaccine?