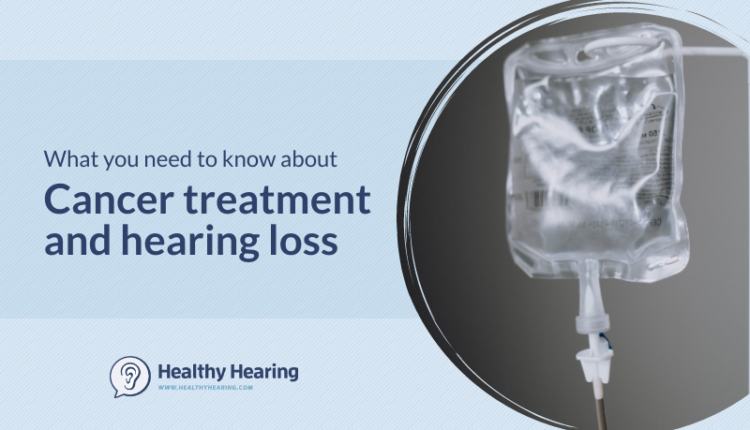 Although life-saving, many cancer chemotherapy drugs have serious side effects. These include hearing-related side effects such as hearing loss, tinnitus (ringing in the ears), and balance problems. While these side effects are sometimes temporary and get better after treatment ends, they are often permanent.

If you’re about to undergo cancer treatment — or have a child in those circumstances — here’s what you need to know.

The 3 main cancer treatments can all affect your hearing

All three cancer treatment options can damage hearing, depending on the location of the cancer.

If you have a cancer that requires surgery in the brain, ear, or auditory nerve, hearing problems can occur, according to the Canadian Cancer Society (CCS). For example, removing a cancerous tumor can cause damage to the ear.

During radiation treatment, high-energy waves or particles are used to destroy or damage cancer cells. If radiation is needed anywhere in the head and neck, it can potentially lead to two types of hearing loss:

Conductive hearing lossHearing loss, a type of hearing loss that occurs when sound doesn’t make its way to the inner ear, can occur. This is due to the narrowing of the ear canal, the thickening of the eardrum or other ear changes caused by radiation, according to a 2019 article published in the Journal of Neurologic Surgery. A condition called otitis media with effusion (OME), in which fluid builds up in the middle ear, occurs in nearly half of people who have radiation therapy to the head and neck, according to the article.
Sensorineural hearing loss, which occurs when the inner ear or auditory nerve is damaged, can also occur as a result of radiation. According to the journal article, higher radiation doses are more likely to cause hearing loss. People younger than 3 years old and older than 50 years old are at higher risk for this type of hearing loss, as are people treated with the chemotherapy treatment cisplatin (more on that later). This type of hearing loss is permanent.

Chemotherapy refers to the use of powerful chemicals that can kill cancer cells. In some cases, chemotherapy drugs can be ‘ototoxic’, meaning they are harmful to hearing.

About half of all patients who receive the chemotherapy drug cisplatin develop hearing-related side effects, including hearing loss, tinnitus, and dizziness. This is known as ototoxicity.

“Not only hearing loss, but also tinnitus and imbalance are common in patients receiving platinum-based chemotherapy and can have debilitating effects on quality of life,” the review article states.

Hearing-related side effects of this drug are quite common: Permanent hearing loss occurs in about half of all patients taking cisplatin, notes ASHA. It usually causes high-frequency hearing loss.

Scientists are still trying to understand why cisplatin damages hearing — it could be because it easily enters the inner ear (while blocking other drugs) but doesn’t seem to leave it, according to ASHA. Once in the inner ear, the drugs can damage hair cells, which are essential for the hearing process.

Other platinum-based chemotherapy drugs that treat solid tumors, such as carboplatin and oxaliplatin, are less likely to cause hearing damage, although they can still cause problems. For example, carboplatin can cause ringing in the ears (tinnitus), notes the Mayo Clinic.

There are other chemotherapy regimens that do not fall into the platinum-based category that can still cause hearing problems or tinnitus. They include vincristine, doxorubicin, gemcitabine, cyclophosphamide, oxaliplatin and farmorubicin, notes a 2016 study published in the Brazilian Journal of Otorhinolaryngology.

Drugs that are not cancer can also cause problems

Keep in mind that other medications besides chemotherapy that are taken during cancer treatment, such as pain relievers, anti-nausea drugs, or antibiotics, can also lead to hearing problems. There are at least 200 medications associated with hearing loss, including over-the-counter medications such as aspirin.

Seventy-five percent of patients five years and younger had cisplatin-related hearing loss three years after starting therapy, according to a 2021 University of British Columbia study.

“Young children [are] particularly vulnerable to the ototoxic effects of cancer therapies,” confirms a 2016 review article in the journal Cancer. This is because the brain and ears are still forming in early childhood, the article notes.

Not only is hearing loss more common in children taking cisplatin, but it’s also more severe, according to ASHA. In addition, even small amounts of hearing loss in high frequencies are a major problem for younger children learning language.

How to weigh the risks?

Cancer is a life-threatening disease, which is why doctors use powerful treatment methods, despite its many known side effects. Knowing the potential risks is helpful as it can help you assess whether the risk is worth it to you personally. Talk to your doctor about the side effects of the drug and whether there are alternatives.

ASHA recommends following these steps if you are taking known ototoxic medications:

Check your hearing: Ideally, do this before treatment to have a baseline record of your hearing. Keeping track of changes: An audiologist can help you monitor your hearing and balance during treatment so that you can quickly catch any problems. This is not always possible, but you may be able to pause or switch treatments. Get checkups: Even after cancer treatment has ended, it’s a good idea to get regular hearing checks, especially in pediatric cases.

Can anything treatment-related prevent hearing loss?

Sometimes alternative therapy may be given if you are particularly concerned about hearing loss or tinnitus. It is very important to talk to your oncologist about the benefits and risks of the treatments you are receiving.

Researchers are also looking at “otoprotective agents” — drugs that may protect hearing when given at the same time as harmful drugs, according to Research Outreach. For example, ASHA points out that administering sodium thiosulfate (commonly used to treat cyanide poisoning) can limit hearing loss from cisplatin in children. The trick is to figure out how to give patients otoprotective drugs while still keeping chemotherapy effective.

If you have undergone cancer treatment and have permanent hearing loss, it is important to see a hearing care professional for expert help. You may be a good candidate for hearing aids, cochlear implants or hearing aids. Treating hearing loss not only helps you hear better, it also brings health benefits, including a reduced risk of depression and injury-causing falls.

Pediatricians with kids speak out about delta surge fears