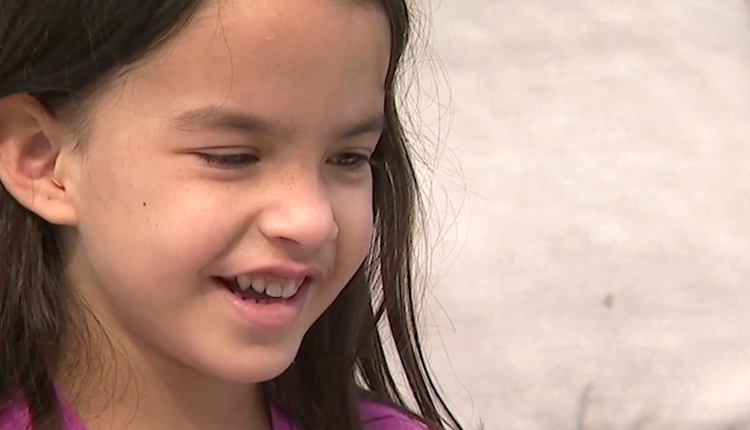 CARLSBAD, Calif. — A 6-year-old’s parents had no idea she would be battling cancer when they enrolled her in a coronavirus vaccine trial.

Layla Maloney is one of 60 children in the San Diego area participating in Moderna’s clinical trials. She is also one in only 200 people in the entire country who are diagnosed with a rare brain cancer each year.

Every father wants to give his daughter the world and Shawn Maloney almost did. As an underwater cinematographer, he has been taking Layla on a world tour since she was able to walk.

“She’s been to Fiji, she’s been to Costa Rica. She has been to Mexico a few times. She’s been all over the US, I mean, she had her first passport when she was two,” Shawn Maloney said.

Unfortunately, their latest adventure brought them to Rady Children’s Hospital this summer. Painful headaches and vomiting prompted the Maloneys to take Layla to the emergency room, and 36 hours later she had to undergo brain surgery.

“She was screaming, like, ‘Daddy, save me. Help me. Do something,'” Shawn Maloney said. “They did a CT scan and it revealed a huge brain tumor, about the size of a golf ball, in her head.”

The Maloneys were busy protecting Layla from COVID. They had already signed her up for Moderna’s research on the vaccine in young children.

“This shouldn’t have happened to get her into the process. It just shouldn’t be there, there are so many reasons why she shouldn’t have been there, but she’s there and that’s quite amazing,” her father said.

If Moderna had called 10 minutes later – after Layla was diagnosed with cancer – she would have been barred from participating. For Shawn, timing is everything.

“We can beat cancer, but if she has to go through radiation and eventually chemo, where she basically has no immune system, she could get COVID and die.”

Layla was less enthusiastic about getting the injections during the trial, but signs seem to indicate she was getting the vaccine and not a placebo. She showed some common side effects after her second dose.

“Last time I flexed my arm and they wanted to argue with me,” Layla said. “I felt fine when my father walked out and said, ‘Are you okay?’ and I said I am very tired and also grumpy.”

To turn Layla’s frown upside down and help raise medical bills, the family started a fun-filled fundraiser. They have raised $70,000 of their $100,000 goal and plan to donate parts to St. Jude Children’s Research Hospital and charities that support animals. Layla, a novice veterinarian, gets to choose the organizations.

‘Last week she had an elephant adopted in her name in Zimbabwe. There’s a great white shark named after her,” Shawn Maloney said.

Tough days are coming as Layla starts chemo in December. The family doesn’t know what the future holds for her cancer, but they know they’ve armed her to fight COVID. It’s something the Maloneys recommend to all parents, especially those who are hesitant.

“An internet connection and a keyboard does not equate to research. It just isn’t,’ Layla’s father said. “Talk to the medical professionals. Look at the data available. Look at the numbers, look at the opportunities.”

Opportunities are something the family wants to beat every day.

“She’s my buddy, you know? We just have this band. And seeing her go through this was cruel.”

Layla will soon know during the trial whether she received the vaccine or the placebo. If the CDC approves a vaccine for young children before Moderna’s is approved, she can withdraw from the trial and get vaccinated, her parents said.

Busy pediatrician offices prepare to give vaccines to children