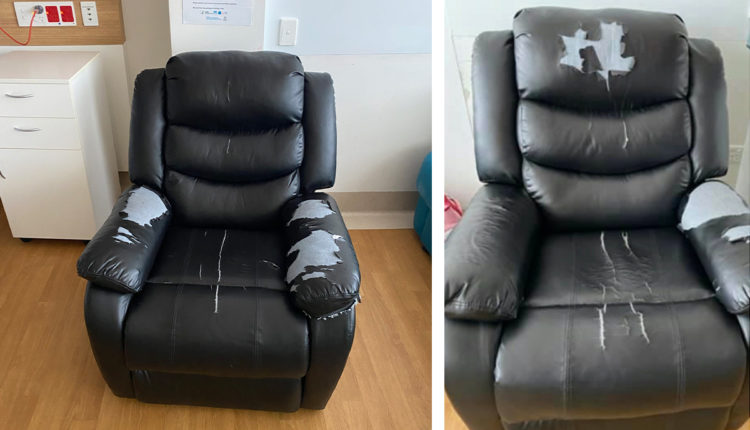 Dilapidated chairs in the cancer ward at Women’s and Children’s Hospital will be replaced, following a father’s concern that they pose a “potential for infection.”

Chairs in the Michael Rice cancer ward at the Women’s and Children’s Hospital. Photos: delivered.

David Kayser, whose 15-year-old daughter Mabelle is being treated for a rare form of bone cancer, has written to the health minister and prime minister about the condition of the seats after twice raising concerns at the hospital.

He told InDaily that he first brought up the matter in July and asked for the chair to be removed from his daughter’s room in the cancer ward at the Michael Rice Center.

He did the same again last week after finding another chair in a similar condition in his daughter’s room.

“I’m concerned about the chance of infection in immunocompromised patients,” he told InDaily.

“You couldn’t physically clean the seats if you tried.

‘Is this the maintenance level of the old Women’s and Kids for the next six years before the new one is built?

“Or are they really going to maintain and maintain the old one?”

The seats are used for relatives visiting sick children.

Mabelle Kayser, 15, who is being treated at Women’s and Children’s Hospital for a rare bone cancer.
Photo: delivered.

In a statement, Dr Ben Saxon, chief of the hospital’s medical department for pediatric hematology and oncology, said “we are in the process of replacing some seats in the Michael Rice unit due to wear and tear”.

“The chairs pose no infection control risk to our patients,” he said.

“The equipment, including chemotherapy chairs, used in our hospital is regularly reviewed and prioritized for replacement based on clinical risk and end-of-life date.

Receive InDaily in your inbox. Daily. The best local news every working day at lunchtime.

Thank you for signing up for the InDaily newsletter.

“Delivering safe and quality care to the women, babies, children and young people of South Australia is our number one priority.”

Kayser said when he first raised the issue in July, the chair had been removed from his daughter’s room.

He was concerned when he saw another chair in a similar state of disrepair in his daughter’s room last week.

“I don’t understand how the people who run that place can’t go ‘that’s unacceptable, we need to look around and make sure there aren’t others like this’,” he said.

“The first time the head nurse on the ward came to see her, she actually said . . . ‘Do you want me to put a sheet over it or something?’ I don’t know how that is an acceptable solution.

Mabelle has been undergoing treatment at the Women’s and Children’s Hospital since she was diagnosed with Ewing’s sarcoma in January.

Her parents have previously spoken out about what they believe to be a lack of resources and ‘substandard’ care for children with cancer in the hospital.

They have expressed concerns about bed shortages, overworked nurses and delays in chemotherapy treatments.

Other families and doctors have also expressed concerns.

In his letter sent last week to Prime Minister Steven Marshall and Health Secretary Stephen Wade, which was seen by InDaily, Kayser asks: “Please explain why our children with weakened immune systems in the Michael Rice (Cancer) Ward of the Women’s and Children’s Hospital in rooms with furniture that poses an infection risk?

“There is no way these seats can be adequately cleaned.”

Kayser also raised the issue with opposition health spokesman Chris Picton, who said the seats “look like something out of a third world hospital – not a hospital we say should be ‘world class'”.

A spokesman for Prime Minister Steven Marshall said: “As soon as he was made aware of this matter, the Prime Minister raised these concerns with the Minister of Health”.

“Health has advised that these chairs pose no infection control risk and that they are replaced,” the spokesperson said.

Media diversity is under threat in Australia – nowhere more so than in South Australia. The state needs more than one vote to move it forward and you can help with a donation of any size to InDaily. Your contribution goes directly to helping our journalists bring the facts to light. Click below to help InDaily keep discovering the facts.