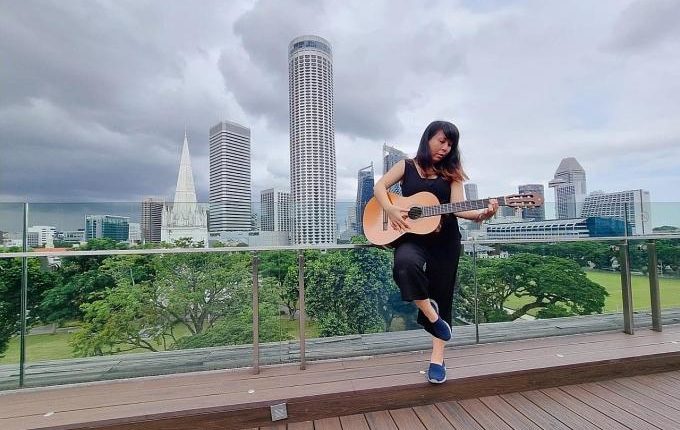 When she was a teenager, she suddenly passed out while in the middle of her piano lesson.

After going through a series of tests, she was diagnosed with nose cancer.

Since last month was childhood cancer awareness month, Ms. Stefanie Loh, now 28, said the news she received more than a decade ago when a high school student turned her world upside down.

She told The New Paper, “It happened so suddenly and I was so lost. I never thought a child could get cancer. There were no symptoms except frequent headaches which I attributed to stress.”

Just a few days after her diagnosis, Ms. Loh had emergency surgery to remove a tumor, after which she fell into a coma. When she woke up, she had trouble eating, talking and swallowing because the surgery was done through her mouth.

She said, “That period was traumatic for me.”

Over four months, she had to undergo 35 radiotherapy sessions, causing nausea, hair loss, and ulcers, and she could only eat mostly soft foods.

During this time, Mrs. Loh was hospitalized and she was not feeling well. She was visited by volunteers from the children’s charity Make-A-Wish Singapore (MAWSG).

It hosted a party for her with food and games, and she was surprised when not only did she get the laptop she wanted, but it was handed to her by one of her favorite musicians, Singapore Idol runner-up and local singer Sylvester Sim.

Mrs. Loh then got the chance to play the piano while her idol sang along.

She said: “It made me very happy and it also made me realize how much I loved music. It was a magical moment.”

After seeing firsthand the power that held a desire to improve a life and prospects, she was driven to spread that hope throughout the organization.

Ms. Loh became a volunteer, or wish-grant, at MAWSG when she turned 21 to make children with cancer happy.

She said: “After my wish party, I told myself that when I come of age I would like to be wish fulfillment. Whenever I see the children we help smile, even during their treatments, I am touched.”

Another cancer survivor and wishing child, who wanted to be known only as Joanna, 16, was diagnosed with medulloblastoma, a common type of cancerous brain tumor in children, when she was 10.

She told TNP, “I couldn’t do the simplest things like walk and talk. It was like being a baby, but in a bigger body.”

Most recently, she helped design a limited-edition custom mask to celebrate MAWSG’s World Wish Day, which fell on April 29 this year.

One of the elements of her design is a dreamcatcher. She was inspired to record it because, according to a Native American legend, it guarantees positive dreams.

Joanna said she volunteered because she was grateful for the way MAWSG helped her cope with cancer and said surviving cancer has made her mentally stronger.

She added: “During the whole process, I also learned the importance of family and my closest relatives. I really appreciated the time and effort they put into making me happier and healthier.

“I have learned many life lessons, such as not giving up easily and persevering in difficult times.”

QI study demonstrates better outcomes for NICU infants with optimized use of CPAP and surfactant: Newsroom