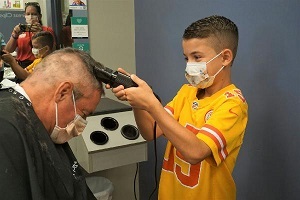 The annual event was held during Childhood Cancer Awareness Month

October 1, 2021 – Clips for Cancer has raised $300,000 to ensure programs and services are available to the increasing number of local children diagnosed with cancer at Golisano Children’s Hospital in Southwest Florida.

While Childhood Cancer Awareness Month and Clips for Cancer ended on Thursday, donations to the event are still being accepted to help as many children as possible.

More than 50 community leaders from across Southwest Florida have volunteered to have childhood cancer survivors shave their heads on Facebook Live during the month to raise awareness of the effects of cancer treatment, often including hair loss, while also raising money for Barbara’s Friends – Golisano Children’s Hospital’s cancer program.

“The real impact of Clips is in the joy it brings to our patients,” says Dr. Emad Salman, regional medical director of Golisano Children’s Hospital in Southwest Florida. “For our current patients, it’s encouraging and shows that the entire community is behind and supporting them. For our survivors, it is a celebration of their difficult journey. It’s not just about raising the crucial funds and awareness about childhood cancer, but also about bringing hope and letting children be children.”

Among the many highlights of the event:

Frank Haskell, 92, who founded Barbara’s Friends with his late wife Betty, reached his goal of raising $50,000. survivor Mackenzie Hummer, has raised more than $50,000 for his $100,000 goal to shave both his head and beard. Mackenzie triumphed and was able to take off both his beard and hair in the spirit of the event and the empowerment it gives to all children battling cancer. Cal Bruno of Bruno of Brooklyn’s Restaurant, joined by first responders and community leaders, had his head shaved at the restaurant’s 7th anniversary celebration in downtown Fort Myers, with the event raising more than $40,000. First responders from the Lehigh Acres, San Carlos Park, South Trail, Iona McGregor, Bonita Springs, Estero and Port Authority Fire Departments, as well as Lee County EMS, Collier County Sheriff’s Office and the Sanibel Police Department participated in the event. Riverdale High School students sold a T-shirt designed by a current cancer patient in Golisano and raised more than $5,000 for Barbara’s Friends. Florida Radiology Consultants not only sponsored the event, but offered an additional $25,000 to support chief curls of leaders, including two of their radiologists.

Behind the clippers were 20 childhood cancer survivors from Golisano Children’s Hospital, ages 8-23. Collectively, these survivors have undergone more than 30 years of treatment. Since its inception in 2018, Clips for Cancer has so far raised more than half a million dollars to help families through their child’s cancer journey.

“It’s unbelievable what Clips has become. From an idea celebrating Mackenzie’s struggle to today, it touches the entire community. It’s heartwarming and inspiring to see so many people responding in such a positive way and giving so generously to help our children battling cancer in Golisano,” said Armando Llechu, chief of hospital operations and women’s and children’s services at Lee Health “It’s hard to fathom how the idea of ​​a haircut can be so powerful, but that’s what it is. Clips for Cancer is unlike any other event because it’s a feeling. It’s an emotional experience for me and for everyone else.” involved. It changes lives, haircut by haircut.”

Since the start of the pandemic, 100 children have been diagnosed with cancer and blood disorders. Thanks to events like Clips for Cancer, which inspired several other events over the past month, and the generous community in Southwest Florida, Barbara’s Friends has a 26-year history of helping children with cancer and life-threatening blood disorders. To date, Barbara’s Friends has cared for more than 10,000 local children. The program helps offset the cost of medical expenses, programs, and services to keep children close to home for life-saving care.

In addition to the shaving events, Barbara’s Friends Advisory Board members have taught Jenna Montone special donation classes at the Pure Barre Fort Myers and Gateway studios she owns, raising $2,000, and Justin O’Brien and his partners at 3 Peppers Burrito Co. have donated 100%. of the proceeds from all children’s meals sold throughout the month, raising more than $3,500.

Clips for Cancer would not have been possible without the support of presenting sponsor Florida Radiology Consultants, site sponsor Great Clips, and the support of The John E & Aliese Price Foundation and Dorcey Law Firm.

Visit BarbarasFriends.org for information about Barbara’s Friends and how you can help local children.

Founded in 1995, Barbara’s Friends provides equipment, staff, and services to support life-saving cancer care for children across southwest Florida at Golisano Children’s Hospital. The pediatric hematology/oncology program is the only program of its kind in southwest Florida and has served more than 10,000 patients since it opened. No child is denied or rejected treatment because of their family’s inability to pay for care. For more information about the Barbara’s Friends fund and supporting child patients in your community, call Lee Health Foundation at (239) 343-6950 or visit BarbarasFriends.org.

Founded in 1994, Golisano Children’s Hospital in Southwest Florida has been named “Top Hospital” by The Leapfrog Group for three consecutive years. It is the only licensed children’s hospital between Tampa and Miami. Lee Health opened the new 134-bed Golisano Children’s Hospital in May 2017 and relocated the children’s hospital from the adjacent HealthPark Medical Center. It includes comprehensive pediatric services, including a 24-hour pediatric emergency department, hematology-oncology unit, milk lab, regional perinatal intensive care center, and Level II and Level III NICU with 70 private rooms. The Golisano Children’s Hospital is proud to have been named the Most Beautiful Hospital of Soliant 2018 in the US, a recognition determined by popular vote. For more information, visit GolisanoChildrensSWFL.org.