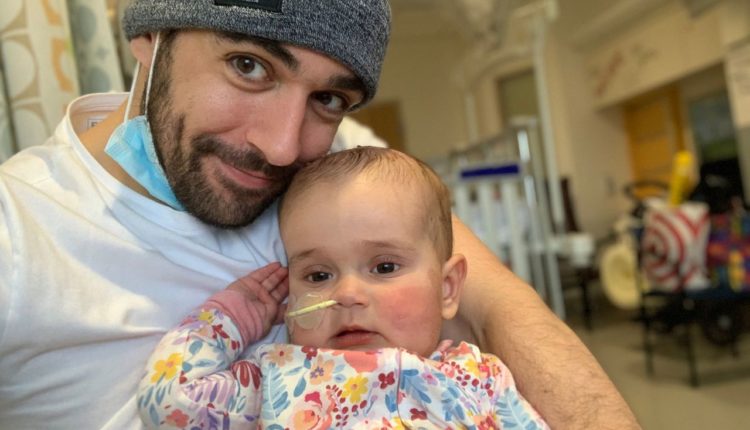 In September 2020, CNN reporter Andrew Kaczynski made an announcement that no parent ever wants to make. His 6-month-old daughter, Francesca, had a rare and extremely aggressive brain tumor.

In the months that followed, as Francesca underwent treatment, people across the country gathered around “Team Beans” — the baby girl’s nickname. A GoFundMe has raised enough money to bring Beans, Kaczynski and his wife, Wall Street Journal reporter Rachel Louise Ensign, to Boston, home to some of the world’s top hospitals and cancer treatment facilities.

But on Christmas Eve, at 9 months old, Beans died in her parents’ arms.

Since then, the parents have raised more than $1 million, with proceeds benefiting the Dana-Farber Cancer Institute in Boston.

On Monday, as part of those ongoing efforts, in memory of his daughter and as a dedication to children battling cancer, Kaczynski will run the Boston Marathon.

On Sunday evening, as the marathon drew closer, Kaczynski visited the Make Way for Ducklings statues in the Boston Public Garden, a spot where he and his wife took their daughter while she was being treated.

Kaczynski also posted a photo of Team Beans’ marathon shirt and asked people to check in during the race with photos of shirts they had purchased as part of the fundraiser. Respondents sent in images from across the country. Many reports came from fellow journalists and newsmakers, including Peter Sagal, host of NPR’s “Wait Wait… Don’t Tell Me!” and an avid runner himself.

Each mile of the race, Kaczynski said, is dedicated to a different child who has battled or battled cancer. While passing through Hopkinton Ashland, Framingham and Natick, Kaczynski’s Twitter page has posted messages for the kid for every mile walked.

At 1pm, Kaczynski rode through Natick and Wellesley, nearly halfway through the marathon.

The funds Team Beans has raised will go directly to Dana-Farber, including to a new pediatric brain tumor program set up at the cancer treatment center, according to Kaczynski’s fundraising page.

“The center will be where the renowned hospital brings together top doctors and researchers in an effort to find better cancer treatments for babies with brain cancer,” a post on the page read. “All of your donations will now be channeled into the newly established Team Beans Infant Brain Tumor Fund, which will support the Infant Brain Tumor Program. While Francesca will never have the life she should have, with your support we have created a lasting legacy for our daughter.”

The fund has raised nearly $1 million. As of Monday, Team Beans had surpassed its marathon fundraising goal, with donations still open for six days.

“We miss Francesca so much every day,” Kaczynski and Ensign said. “We will always be her parents and our efforts to fight childhood cancer are a way of staying true to our responsibility to care for her.”