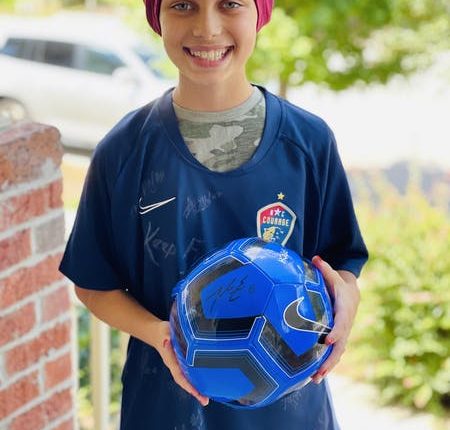 When the UNC women’s soccer team took on rival Duke at home on September 17, they played for more than just the cheering fans in the stands — they played for 11-year-old soccer player Kaleigh Britton.

In July, Kaleigh was diagnosed with medulloblastoma, a malignant brain tumor. She underwent two brain surgeries before she and her mother, Kristin, moved to Philadelphia for a short time so that Kaleigh could receive radiation therapy at the Children’s Hospital of Philadelphia.

Four months after Kaleigh’s diagnosis, she and her mother are now back home in Raleigh, where Kaleigh is undergoing chemotherapy at Duke University Hospital. She has now completed her first round of chemotherapy. With all these hectic changes in her life, there is one thing she mentions that she misses: football.

“I missed my soccer team,” Kaleigh said. “I mostly missed the games.”

The UNC women’s soccer team became aware of Kaleigh’s story when someone told the wife of head coach Damon Nahas about Kaleigh and her passion for soccer. Naha passed the information on to the team, and junior midfielder Aleigh Gambone staged a video shoutout from the Tar Heels to Kaleigh in the days leading up to the big Duke game.

Kaleigh is an NCFC Challenge soccer player. She and Kristin refer to the girls on the team and their families as Kaleigh’s “football family.” While she can’t currently play with her teammates, Kaleigh enjoys keeping up with the team and was recently able to visit her soccer family at one of their games.

“We’ve lost every game this season,” Kaleigh said. “We scored our first goal in the one I went to.”

Kaleigh’s football family is just one of many groups of people who have supported the British during this difficult time.

“So many people in the community have really supported me,” Kristin said. “We have been really lucky to have received so much help, support and love.”

The women from North Carolina ran a fundraiser for Childhood Cancer Awareness Month throughout September and wanted to support a fellow soccer player by making a video for Kaleigh. Along with the video exclamation, the UNC women’s soccer players showed Kaleigh’s name or initials on the tape they wore on their wrists for the Duke game.

“It’s always so great to use our platform to help others, especially the young girls who aspire to be like us,” Gambone said. “It’s so easy to do, and of course it makes us feel good, but I hope it makes them feel good too.”

Kaleigh appreciated the gesture and said her soccer friends were impressed with the video shoutout she received from the North Carolina players.

“I thought it was so sweet that everyone got together so they could make a video for me,” she said.

Until she can return to the soccer field with her teammates, Kaleigh will continue to encourage soccer teams from home, while the UNC women’s soccer team also encourages her.

Sign up for our email newsletters to get the news and headlines of the day delivered to your inbox every morning.

US Surgeon General, American Academy of Pediatrics discuss vaccines for kids ages 5 to 11