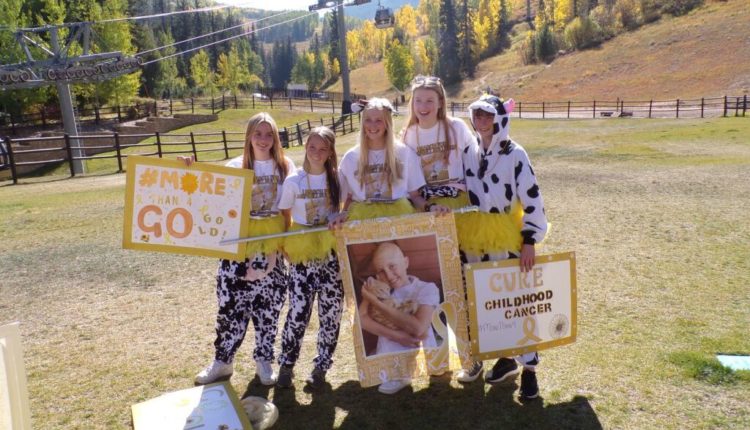 Sophie Stocker, Ana Stocker, Addie Sullivan, Brie Richards and Will Flaherty dress up in cow costumes in honor of Campbell Sullivan at the Vail CureFest on Saturday.
Courtesy photo

About 50-60 people wore gold or cow costumes on Saturday as they walked from Lionshead to Vail Village at Vail’s second annual CureFest. The event raises awareness and funds for childhood cancer. Gold is the official color of childhood cancer and Campbell Sullivan loved cows.

After a four-year battle with CIC-DUX4 sarcoma, Sullivan died on February 22 after a brain hemorrhage caused by the rare cancer. She was 19.

At the start of Saturday’s march, a crowd departs Lionshead Village.
Courtesy photo

Sullivan, alumnae of the Vail Ski & Snowboard Academy, founded the SkiFast Foundation for other children with sarcomas, became a pediatric cancer advocate, marched to Washington, DC to support childhood cancer funding, was named an ambassador for St. Baldrick’s Foundation . Through it all, she never lost her megawatt smile while encouraging others.

As supporters marched back into Vail, Gibby and Finn Sullivan, Campbell Sullivan’s mother and brother, were in Washington DC for the National CureFest. They were there to receive the “Driving Force Award” in Campbell’s honor.
Courtesy photo

Many attendees at Saturday’s CureFest wore t-shirts with a photo of Sullivan, whose goal with the creation of the SkiFast Foundation was to help and support pediatric cancer patients (18 and younger) with sarcoma cancer by helping them return to the activities they love.

Last year, Sullivan led the march. This year, her friend and fellow alumna Cleo Braun led cheers such as “children earn more than 4” — the percentage of cancer research funding that goes to childhood sarcomas — and “go gold” as the walkers returned the cheer and marched to Vail village.

At the Lionshead registration, t-shirts, wristbands and even marmalade jam were for sale for the benefit of the SkiFast Foundation. Ski racing superstar Mikaela Shiffrin donated racing suits, jackets and autographed bibs, which will be offered at the auction until mid-October.

Gibby Sullivan, Cambell’s mother, was in Washington DC to march to the National CureFest to posthumously receive the “Driving Force Award” in honor of her daughter. Campbell Sullivan has been praised for starting the Vail Curefest and for always wanting to do more for childhood cancer.

Elena Jones is encouraging people to bid on Mikaela Shiffrin’s auction items at Saturday’s CureFest in Lionshead Village. The items will be auctioned until mid-October.
Courtesy photo