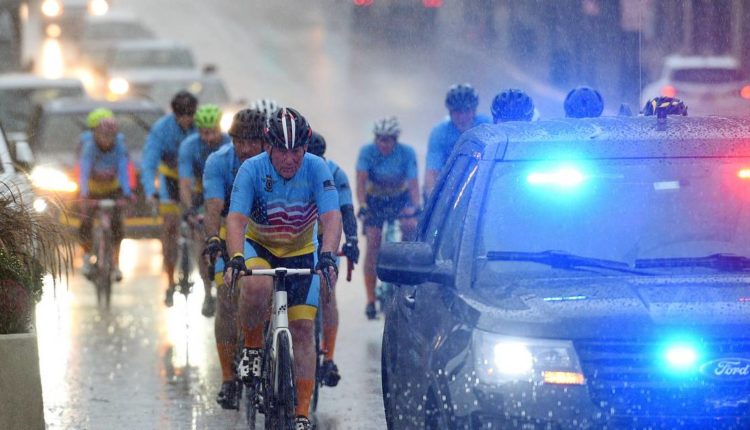 It was only fitting that it was pouring rain Monday as cyclists crossed the finish line in St. Charles in the third annual Cal’s Angels “War on Wheels” ride.

The nearly 1,000-mile, two-week bike ride from Mount Rushmore — which raises awareness and funds for childhood cancer research and family support and programming — has been plagued by inclement weather from the start, according to Cal’s Angels co-founder and president Stacey Wahlberg. .

“Every day they rode there was rain,” Wahlberg said, including the first day of 40 mph winds and sideways rain as cyclists left South Dakota.

“They made the most of it. They kept pedaling and they all did this. They all pedaled every mile.”

About a dozen riders made the entire trip and they finished with 20 at the finish on Monday after some joined in Iowa City.

Curt Hurst of St. Charles, who has raced all three years, said stopping or sitting out a leg was not an option for them.

“We have inspiration,” Hurst said of the kids battling cancer every day. “The whole reason we’re doing this is for them, so we can’t stop when the going gets tough. There were days when we wanted to, but they can’t stop, so we don’t stop.”

While money is still coming in, Wahlberg said they’ve raised more than $500,000 so far.

The money will go toward childhood cancer research, wish granting and hospital programming – including 25% to Cal’s Angels new partners at the University of Iowa’s Stead Family Children’s Hospital for research. The rest will support Cal’s Angels comfort kits, which are available to pediatric cancer patients in the Chicago area and now Iowa City.

Cal’s Angels is a non-profit organization with a mission to raise awareness, fulfill wishes and fund childhood cancer research. In addition to fundraising events, Cal’s Angels promotes Cal’s Law, which aims to make diagnostic testing more accessible to pediatric cancer patients. The bill was recently signed into law in Illinois, with plans to introduce it in other states.

CNN’s Andrew Kaczynski ran 26.2 in Boston to honor his infant daughter who died of brain cancer