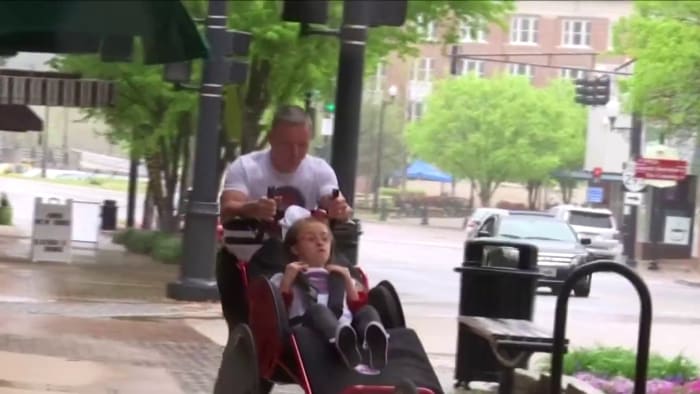 DANVILLE, VA. – Let’s face it, running isn’t for all of us, but for a Danville guy, it’s become his passion.

Now he uses it to bring a community closer and make a difference to children with special needs across Virginia.

Despite Thursday’s rain, Danville’s 12-year-old Arwynne Liberty had to take a ride on her beautiful new ride.

“When I was expecting Arwynne, I went for a routine ultrasound,” says her mother Deanne Liberty. “They found a heart defect and some other things that suggested she probably had Down syndrome.”

But Deanne says it won’t stop her.

“Arwynne doesn’t meet a stranger,” she says. “Arwynne is full of life and loves people.”

That’s easy to see when you look at her with Steve Scott. The two only met a week ago and they are about to become a very close bond.

“This is going to be a different world for me,” Steve says. “But I’m ready to take on the challenge.”

Steve runs all over the world, but during a stunt in Richmond he met a little girl with special needs that set him on this journey.

“After doing that, the good man upstairs put something in my heart to say, ‘Hey, let’s go after this.’ I also had a brother who had CP growing up,” he says. “I was in that world as a child and grew up in it. I feel like it’s a way to give back to the community.”

After about 10 practice runs, Steve had to tell Arwynne that he was saving his legs for the big race. He hopes the two can open the door for other families like the Libertys.

“Not all other parents or other people can relate to some of your circumstances and situations,” Deanne says. “It’s really helpful if you can have a community of other people for support.”

Day in the Life of a Doctor: Pediatric Rheumatology