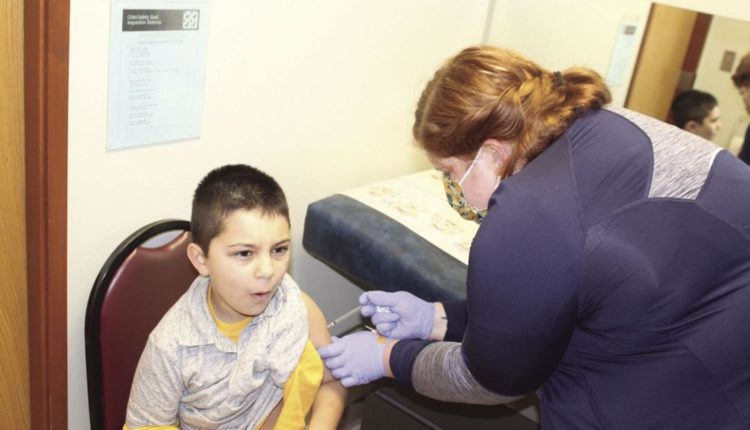 When North Bend Medical Center received its first doses of the pediatric COVID-19 vaccine, a group of children were eager to be among the first to receive the vaccine.

One by one, the children went to a patient room in the pediatric ward to receive the vaccine, and despite the mild pain of the shot, they smiled, laughed and were happy.

The group were children of doctors and nurses at North Bend Medical Center, and their parents were equally happy that their children were among the first to be vaccinated.

dr. Rajesh Ravuri brought his son Rohan to the clinic and Rohan struggled to hide his excitement as he waited to be recalled.

“I asked for the vaccine,” Rohan said. “I just want to be able to do more things.”

dr. Ravuri said vaccinating children is another step to get out of the pandemic.

“I think you see how this pandemic has affected the whole world over the past two years,” Ravuri said. “While the kids may not get that sick from it, they spread it easily. To get herd immunity, we need to get kids vaccinated.”

Ravuri, the chief medical officer of North Bend Medical Center, said Rohan has been asking to be vaccinated for months and was thrilled to be one of the first to receive the pediatric vaccine.

“My son wanted to participate in the trials because he wants to travel,” Ravuri said. “He wants to go to India to see the Taj Mahal.”

Ravuri said he has seen the impact of COVID first-hand, and while children are doing better than most, he is relieved that his son was able to get vaccinated.

“As a parent, it gives me great relief to know that he is protected, and if he travels, he will do well,” he said. “Now I know that even if he gets infected it will be like a little flu.”

dr. Maynika Rastogi also took her children to the vaccine clinic. Her son Elias was so excited when he got the vaccine that he raised his arms triumphantly.

Rastogi, a pediatrician, said she had no hesitation in getting her children to get the vaccine.

“Getting vaccinated keeps them safe, the group stays safe, and they can be kids again,” she said.

Although Rastogi is a supporter of the vaccine, she said her children decided whether to get the shot.

“They wanted to do it themselves,” she says. “This was not forced on them at all. They were so excited to be here.”

Rastogi said getting her children vaccinated is a step in the right direction.

Rastogi said children ages 5-11 get the same Pfizer vaccine used in adults, but it’s one-third the size. The children will have to wait three weeks to receive their second vaccine, and two weeks later they will be considered fully vaccinated.

dr. Derek Rogalsky, a general surgeon, also brought his child to the clinic. He said it was an easy decision to have his children vaccinated.

“They have a lot of grandparents that they love to visit, and we want everyone in our family to say that,” he said. “They want to do more school playdates. Being social is good for kids, and they’ll be safer if they get vaccinated.”

Rogalsky, who was first vaccinated last December, said he did not hesitate to bring his children to the clinic.

“I think the science is solid and sound,” he said. “I have no problem with this. It is new, but also safe and effective.”

Jesse Dorfmeister, a nurse practitioner at North Bend Medical Center, brought his two daughters to the clinic and said he didn’t hesitate.

Ravuri said North Bend Medical Center is opening its pediatric clinic to any family interested in having a child vaccinated. He said anyone is welcome to come to pediatrics, even without an appointment, for the vaccine, and there will never be a charge.