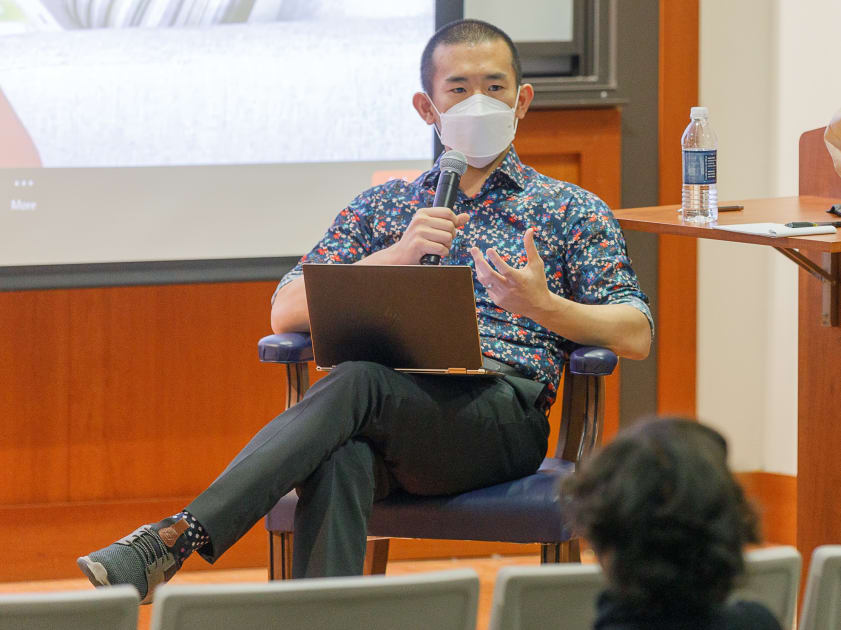 Sponsored by YSPH, the discussion centered around an article Yong wrote last year in which he claimed the public health field had “participated in its own marginalization.” In the piece, Yong explained how early practitioners approached public health from a broad, societal perspective that led to important reforms such as improved sanitation, better housing and safer working conditions. But that approach, Yong said, was overshadowed by the rise of the germ theory and advances in biotechnology that essentially shifted the field’s focus.

“This Vision” [centered on germ theory and biotechnology] gave people the freedom to avoid sticky social problems and move away from the kind of social reforms that were seen as inefficient or overly political,” he said.

Fairchild, a historian who works at the intersection of history, public health ethics and public health policy and politics, agreed with Yong’s analysis.

“Because of this infatuation with science… it would be cheaper, more effective and wouldn’t require… a major political change,” she said.

Many of today’s funding priorities still focus on biomedical interventions rather than prevention strategies, Fairchild noted. However, she said she remains optimistic, especially as she sees how society has coalesced around movements like Black Lives Matter, which have helped bring ideas such as social determinants of health back into the core public health conversation.

“What history gives us is the opportunity to think about different possibilities at a time when there is a lot of potential,” she said.

Drawing on his personal experiences, Vermund related how, in the 1980s, he was told by a leading scientist that epidemiology should only be “observative.”

“I saw academia almost standing in the way of progress,” he said.

Vermund believes that much has changed since then and that public health science is no longer seen as disconnected from activism. He pointed to the expansion of the Yale School of Public Health’s Office of Public Health Practice as an example of a direct fusion of science and community impact. OPHP, which promotes sustainable and equitable partnerships involving students, educators and community members, has seen its workforce nearly triple, said Vermund.

Despite progress made to focus public health more on social issues, Vermund fears the current political atmosphere could make it more difficult to find common ground in solving societal challenges.

“We used to have people from all walks of life and from all perspectives in favor of public health; now public health is almost like a socialist split,” he said.

“As public health in our elite institutions became more vibrant and stronger, [those institutions] also became technocratic, moving away from the real seed corn and the public health ‘why’ by dismantling strong relationships with local and state departments,” she said, echoing criticisms from renowned epidemiologists Milton Terris and Abraham Lilienfeld.

Williams, however, sees the tide turning. She believes the pandemic, as well as recent social movements such as those surrounding George Floyd’s death, will lead to greater engagement in social issues by those on the academic side of public health.

“There is a movement towards this activism turn that has spawned the pandemic and current events,” she said. “Whatever the pandemic has done has exposed an incredible amount of unfinished business in equities and environment, health and safety.”

Williams believes that the focus for academic public health in the future should be on striking a balance between generating knowledge and turning knowledge into action, as well as ensuring that academic institutions remain connected to community public health practitioners .

“We are at a watershed in public health,” she said.

The April 8 discussion was supported by Yale’s Poynter Fellowship in Journalism program and the Association of Schools and Programs of Public Health (ASPPH).

A recording of the discussion can be found on YouTube.

‘This Is Our Fight Against Cancer’: Researchers Find HIV Drug Promising for Cancer Treatment | News