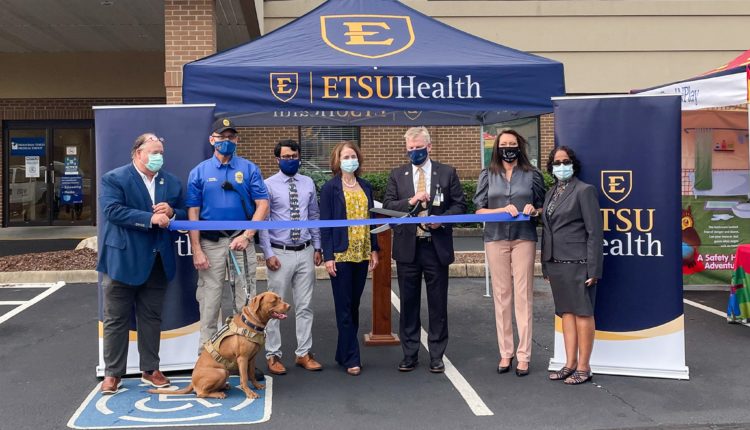 Pepper recently had an exam room in ETSU Pediatrics’ new Elizabethton location dedicated to her. Agent Bill Mitchell, owner of the beloved therapy dog, shares more about why Pepper is so much more than just a dog and actually changes students’ lives.

Pepper poses for the sticker version of himself in the exam room. (Contributed/ETSU Health Facebook)

“I’ve seen such a big change for the better in people’s mood and happiness from the moment they saw Pepper and after spending just a few minutes petting and cuddling Pepper,” Mitchell said. “So many students have said that they actually preferred ETSU over other colleges simply because of Pepper.”

Pepper has only been on campus since late February 2020, and Mitchell describes her as having a very important role in student mental health and the appearance of the university itself.

“I’m putting Pepper right next to the University of Tennessee Smokey,” Mitchell said. “She gives us more recognition and she represents ETSU very well with her attitude, clothing and appearance.”

Agent Bill Mitchell goes on to explain that he didn’t expect all the publicity with Pepper, let alone a room dedicated only to her.

“She likes small children and children with special needs because she only interacts with them in a way that they understand,” Mitchell said. “So when we got to the Elizabethton clinic, I was really speechless about the dedicated space.”

Pepper has come such a long way since she was found abandoned on Cocoa Beach, FL. Mitchell applied to the sheriff to be assigned a dog for emotional support on campus and was assigned Dakota, who is now Pepper. She is now a figure for the university and for the area itself.

“From the beaches of Florida, we traveled back to the mountains of Johnson City, Tennessee, where Pepper would touch the lives of so many people and hopefully make their day a little better,” Mitchell said.