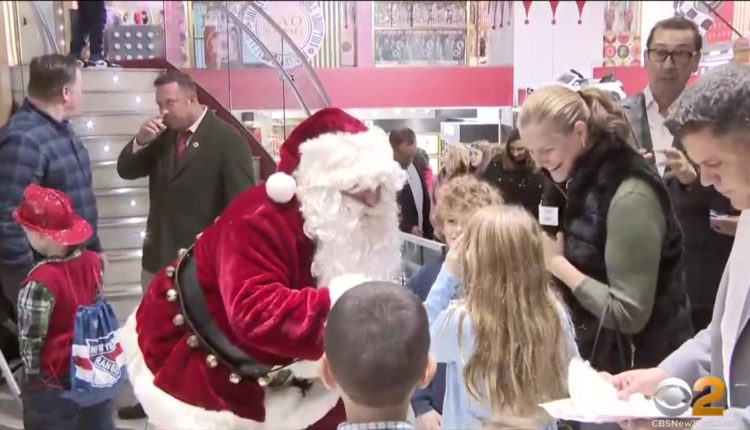 NEW YORK (CBSNew York) — FAO Schwarz and the Union of Uniformed Firefighters helped bring the children of fallen firefighters into revelry on Sunday.

As CBS2’s Christina Fan reported, 50 kids and their families were treated to a full day of fun.

Joy overflowed from the back of a fire truck for FAO Schwarz, where Santa Claus, FDNY mascot Hot Dog and toy soldiers smiled at widows and their children, fulfilling a promise to their fallen heroes

“We want to thank you so much for coming and being a part of this. You make our day more than we make yours,” said Andrew Ansbro, president of the UFA.

For 40 years, the union has given a smile to families of firefighters who have died while on duty. Sunday’s celebration was especially meaningful for Erika Oelkers and her three daughters, who lost FDNY firefighter Tom Oelkers to 9/11-related cancer in May.

“The last nine months that my husband was sick have been very difficult for them. They saw him deteriorate quite quickly and it’s hard for them to understand that their father didn’t want to leave them, but he loved his job,” Erika Oelkers said.

Not only did FAO Schwarz receive more than four dozen children and their families on Sunday, they also provided free gifts and gift cards.

Ambelas’ daughters were just 5 and 8 when Lieutenant Matt Ambelas died in a high-rise fire in 2014. They said the best part of the event every year is reconnecting with other families and firefighters.

“It’s like the fire station is my second family, so I just enjoy being around everyone,” Gabriella Ambelas said.

“They never forget and it’s not just now; it’s all year round,” said Nanette Ambelas.

Today and every day, the department delivers on that promise.

In addition to time at FAO Schwarz, families were also treated to views of the city from the observation deck at Top of the Rock.