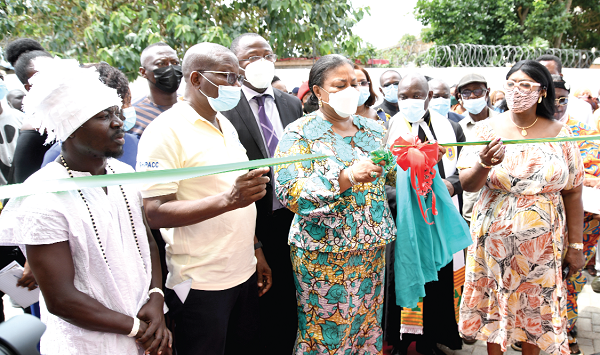 The First Lady, Ms. Akufo-Addo, has inaugurated a 54-bed hostel at Korle-Bu Teaching Hospital to house children being treated for cancer and their parents.

The project was carried out by the Rebecca Foundation, in collaboration with the Ghana Parents’ Association for Childhood Cancers (GHAPACC).

The facility, inaugurated last Wednesday in Accra, is described as the first of its kind in the country and the largest in Africa.

Ms Akufo-Addo said she started the project because a major challenge for children with cancer accessing hospital care and their parents was accommodation for the duration of treatment, especially those from afar.

She said this resulted in low turnout for childhood cancer treatment at the country’s two treatment centers, one in Accra and the other in Kumasi.

Ms. Akufo-Addo said she identified the problem and pledged to build the hostel facility on February 15, 2017, at the sod ceremony for the project, where she was the special guest of honor.

The facility, she added, would relieve the stress of having to travel for several hours repeatedly for treatment, along with the associated costs and risks for children and their families.

Front view of the hostel facility.

The First Lady said the denial, pain, desperation and financial burden associated with childhood cancer made it almost a taboo topic.

However, she said there was a need for the darkness surrounding cancer to be dispelled by everyone who played their part.

“We need to talk about hope. Because, really, with early diagnosis, treatment was started on time and completely; recovery is quite high for childhood cancer,” she said.

A Deputy Health Minister, Ms. Tina Gifty Naa Ayeley Mensah, expressed her gratitude to the First Lady and her foundation for the facility.

“I would urge hospital authorities to prepare plans, preventive and management schedules for this beautiful building constructed and donated to the hospital for use by children undergoing cancer treatment and their parents,” she said.

The President of the GHPACC, Dr. Felix Kwame Aveh, expressed deep gratitude to the First Lady and her foundation for the hostel facility.

The facility, he said, was well-appointed with everything needed to ensure that children undergoing treatment were comfortable.

He explained that the formation of GHAPACC was necessitated by the realization that 75 percent of childhood cancers were curable.

The association, he said, was made up of parents of children diagnosed with cancer and childhood cancer survivors, explaining that the association provided opportunities for parents and families to interact, share experiences and advocate for better care for children. with cancer and other life-threatening blood. diseases.

dr. Aveh added that more than 80 percent of the pediatric cancers treated at Korle-Bu University Hospital were referred cases from the other regions, half of which stopped treatment after several hospital visits.

“Members of GHAPACC investigated and found that affected families were not leaving treatment because they had lost hope and given up, but rather because of accessibility issues,” he said.

That, he said, would ease the financial burden on parents and guardians caring for children being treated for cancer and increase their chances of survival.

‘UK at the Half’: UK HealthCare Launches Pediatric Vaccine Clinic