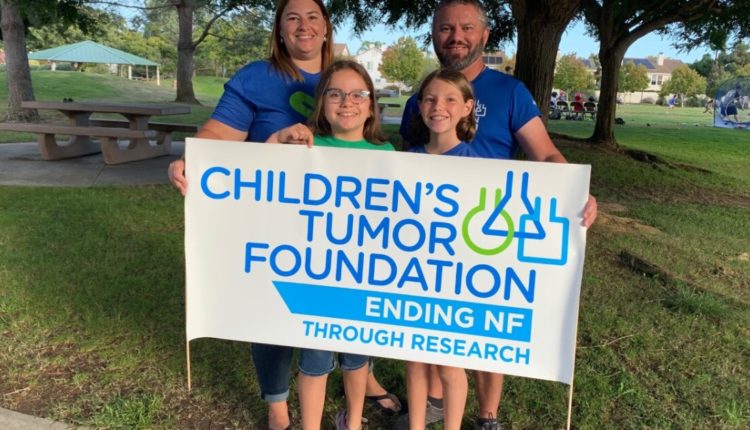 Constance Dufayet just can’t do some things that most other kids her age can do.

The 11-year-old cannot safely cycle outside her home in Carmel Valley. She cannot cross the street without someone accompanying her. She can’t join 10-year-old sister Celeste on a girls softball team.

But after two years of chemotherapy for the brain tumor that impairs her vision, the Torrey Hills elementary school student beams as she talks about the next important event in her life — the Shine a Light on Neurofibromatosis fundraising walk on Nov. 7 at San Diego’s De Anza Cove in Mission Bay. Park.

“I’m so excited,” she said. “We will be holding a lot of (activities), such as a silent auction. There will be a DJ and music, and we will have a lot of fun.

“And the sponsor is actually from Geppetto (toy stores), which is really cool. There will be two walks, a 5K and a shorter one.”

The event, which begins at 2 p.m., aims to help sponsor, the San Diego Branch of the Children’s Tumor Foundation, reach and exceed its goal of raising $15,000 to research and treat neurofibromatosis, the condition that Constance meets.

Event information and registrations are available through the website, shinealightwalk.org/sandiego2021.

Organizer Claudia Becerra said she’s still working on the entertainment aspects of the walk, but they could include Star Wars characters, balloon performers and more.

“Neurofibromatosis is a rare genetic disorder and most people have never heard of it,” Becerra said. “This event is an important reminder for newly diagnosed families and all those whose lives are impacted by NF that they are not alone in the fight to end NF.”

There is no cure for NF, which affects about one in 3,000 births and can cause a range of conditions.

Although NF is usually diagnosed in early childhood, symptoms often don’t appear until later. Constance’s parents, Claire and Cedric, knew of their daughter’s condition since she was a baby. It wasn’t until about three years ago that her doctors discovered that her eyesight was deteriorating.

“Until recently she had no problem,” Cedric Dufayet said. “She had a full medical follow up and then they started seeing her vision getting poor and an MRI revealed she had a tumor on her optic nerve.”

Not all people with NF develop symptoms, while others experience mild to severe effects.

“Some people get more serious conditions, like Constance,” her father said. “They can lose sight or have impaired vision. It’s a broad spectrum disease. Some kids can have deformities and some can have learning disabilities. Some patients have nothing and some have the full package.”

Constance has limited vision and nearsightedness in both eyes because of the tumor.

“I run into people in the store and at recess,” she said, adding that she sometimes doesn’t recognize acquaintances she meets.

The growth has also pushed on other parts of her brain and could lead to endocrine disorders, the father said.

There is hope on the horizon, with the US Federal Drug Administration’s approval in 2020 of a drug branded Koselugo for inoperable plexiform neurofibromas. Constance’s parents hope the drug will help their daughter’s condition.

“It would be the next step,” Claire Dufayet said, as it is no longer safe for the girl to undergo chemotherapy. “Her body couldn’t take it anymore.”

Said Constance: “My immune system started to get very weak. I almost had transfusions a few times, which caused me to miss chemo several times.

“The doctors just decided to stop because they didn’t want this to cause more problems and make me sick… The good news is it’s not getting any bigger.”

Should her vision deteriorate, Koselugo may be an option. Constance’s parents credit the Children’s Tumor Foundation with advancing the drug for federal approval.

“It has been approved thanks to all the research efforts and the funds raised by the CTF,” said Cedric Dufayet. “It is one of CTF’s victories that the funding has brought that drug to market.

“Some children may have large and deforming neurofibromas. These drugs shrink them to some degree, improving their quality of life.”

Yet a cure has eluded scientists, which is why events like the foundation’s Shine a Light walks are so important. While the walks take place across the country, they are organized and organized by the organization’s local committees.

“With money raised by the CTF, that drug has come to market,” said Cedric Dufayet. “That’s why non-governmental organizations are so important to fund NF research.”

Because NF causes symptoms that often lead to other more serious problems and suffering, patients need a team of specialists.

“These kids usually need to see a neurologist, a dermatologist, sometimes an oncologist, an ophthalmologist, and sometimes a geneticist,” Cedric said.

Of Constance’s treatment, her mother said, “With chemo, everything had to be monitored all the time.”

Constant medical supervision and treatments coupled with the limitations associated with NF pose a major challenge to patients and their families.

Fortunately,’ said Constance,’ her teachers, fellow students and neighbors know about her condition. She said she managed to keep up with her education, despite missing time due to chemo sessions.

“I’ve explained to my classmates what I have and what it is and how it affects me and they all understand,” Constance said. “So it’s easier in class when I don’t see well and I don’t understand. They’re not all like ‘What?'”

Her mother testifies, “She is always smiling and strong.”