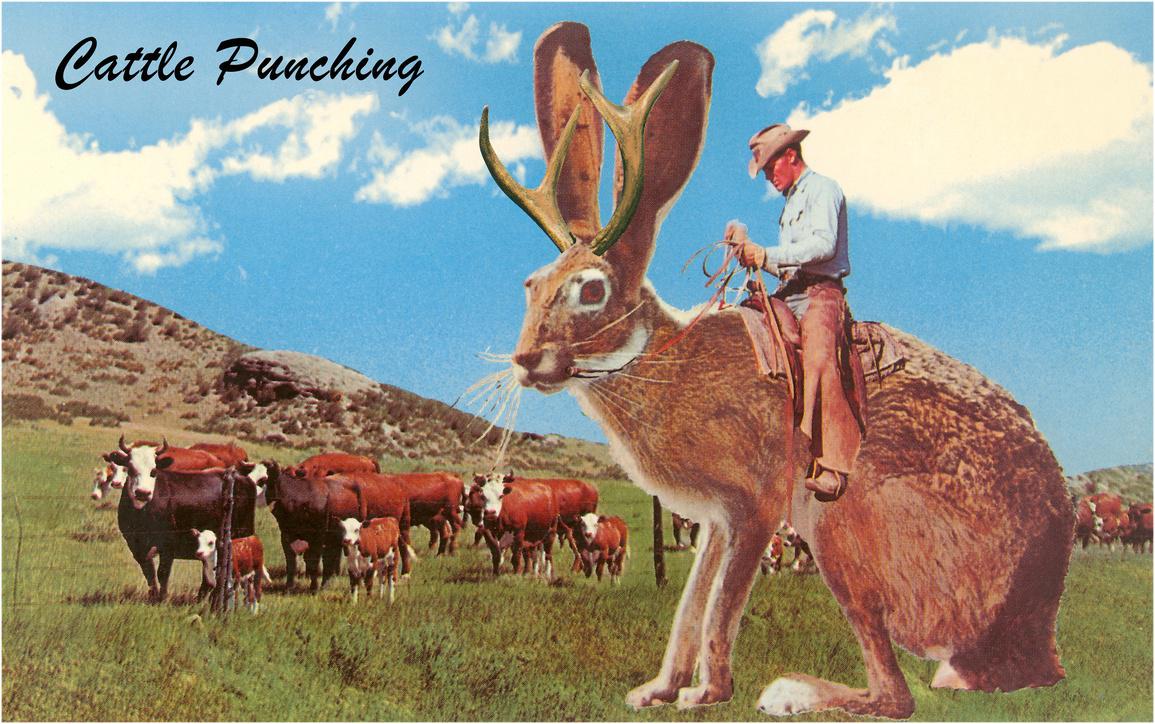 Michael P. Branch’s On the Trail of the Jackalope is a great romp in two great literary genres: American fairy tales and the history of medicine.

The book begins in the history of medicine. In the prologue, readers are introduced to Dr. Richard E. Shope of the Rockefeller Institute. In the early 1930s, a virus caused horn-like cancers on the faces and bodies of rabbits in the American West and Midwest. dr. Shope had received a solution of liquid growths in the mail. Suspecting that a virus could be causing the rabbits’ problems, and knowing that viruses are much smaller than bacteria, he passed the liquid through a filter fine enough to trap bacteria and allow viruses to pass through. . He then scratched filtered liquid into the skin of uninfected rabbits. The rabbits grew tumors at those sites, successfully and simply demonstrating that the cancerous tumors of the rabbits were viral tumors.

Cover of On the Trail of the Jackalope

Chapter one of On the Trail of the Jackalope drops that tantalizing story and jumps straight into the story of the jackalope, which also begins in the early 1930s. A jackalope is a fake animal, believed to be a mix of jackrabbit and antelope. As folklore goes, the jackalope (lopes?) hops all over the West and Midwest. If the species were real, you’d have to imagine that in the past 35 years, at least 200,000 nearly identical jackalopes found their way to Diane and Frank English’s home in Rapid City, South Dakota. There they sacrificed themselves to the two taxidermists for stuffing and selling to tourists 55 miles away at Wall Drug in Wall, South Dakota. Actually. According to the English, that is about the number of stuffed jackalopes they have sold through Wall Drug.

I’ve been to Wall Drug. “Free ice water!” is the sign that drew me in when I was driving without air conditioning on a blazing August day along Interstate 90. Wall is more than just a drugstore. It’s also a whole mall with western kitsch, fast food and things that nobody really needs. The sheer number of nearly identical jackalopes sold there would make it impossible for anyone over the age of five to believe that jackalopes were born naturally. (To my mind, goldfish and minnows seem more distinct than Wall Drug jackalopes.)

Even if jackalopes are a hoax, the history of jackalope is worth exploring and Mr. Branch had a lot of fun with it. He visited the descendants of the Herrick brothers who, when they were young in 1932, designed, stuffed and rode the first jackalope. As he drove through the West and Midwest, Mr. Branch by almost everyone, even vaguely connected to the jackalope “path”. Indeed, he turned his search for the story of the jackalope into a vivid portrait of hotel clerks, waitresses, crickets, tourist attractions, music, Amazing Grass Cams, Rumors of Extinction, Big Foot, Bat Boy, bar fights, roadside museums and virtual museums. mr. Branch is an excellent storyteller.

Just over halfway through the book, the author shifts his focus from the jackalope story that began in the early 1930s, back to the one he had dangled readers in the book’s prologue. It is the early 1930s story of the discovery of the virus that can turn real rabbits into horned grotesqueries.

As bright as the first half of the book shines with charm and good threads, the second half impresses with excellent coverage of the history of medicine and the development of a cancer vaccine.

In the early 1930s, Dr. Richard Shope the influenza A virus that caused the 1918 Spanish flu pandemic in pigs and humans. During those years, he was also interested in the tumors that appear on cottontail rabbits. As described in the prologue, he was able to show that the tumors were viral. He was also able to show that, once infected, antibodies produced by the rabbit’s immune system largely protect them from reinfection. Shope’s rabbit research was the first to show conclusively that viruses can cause deadly cancers — and that an antibody-dependent vaccine could one day be developed.

Of course, modern medicine now has one. It is the human papillomavirus (HPV) vaccine, approved in 2006 by the Food and Drug Administration for use in the United States.

According to several pieces of scientific research cited in On the Trail of the Jackalope, papillomaviruses, such as those that cause horns in rabbits, may be 400 million years old. HPV, a sexually transmitted infection in humans, is about 50 million years old and causes about 11% of all human cancers.

Quote on the trail of the Jackalope, citing data from Centers for Disease Control and Prevention:

I do have one complaint about this book. The subtitle is “How a legend captured the world’s imagination and helped us cure cancer.” Actually, the jackalope legend did not lead to the work of Dr. Shope to the rabbit papilloma virus, it just happened to be with it. And of course, while Shope’s work led to a vaccine developed by others, a vaccine isn’t a cure, is it?

Well, that’s in the opinion of Dr. John Hess, the family physician of Mr. branch. In the words of Dr. Jess:

“We’ve all been indoctrinated — even those of us in the medical professions — with the idea that a cure fixes something that’s broken. But the ultimate cure is the one that prevents disease in the first place.”

Point well taken. The HPV vaccine is underprescribed and Mr. Branch considers some of its image issues. For example, which parent of a sweet, prepubescent child wants to introduce a virus into the child’s body while waiting for that child to have promiscuous sex one day?

America is still a Puritan culture to some extent. Some of us are willing to sacrifice our children’s lives if it helps us to imagine that one day they will grow up loving just one person, and they will do it impeccably. That would be all well and good, but the CDC reports that:

“Every year in the United States:

As a possible means of emphasizing a “Get your son or daughter that HPV vaccine!” message, I highly recommend On the Trail of the Jackalope: How a Legend Captured the World’s Imagination and Helped Us Cure Cancer. I also recommend it for other reasons. It’s an excellent collection of well-told threads and a nice piece of medical history reporting.

On the trail of the Jackalope: how a legend captured the world’s imagination and helped us cure cancer