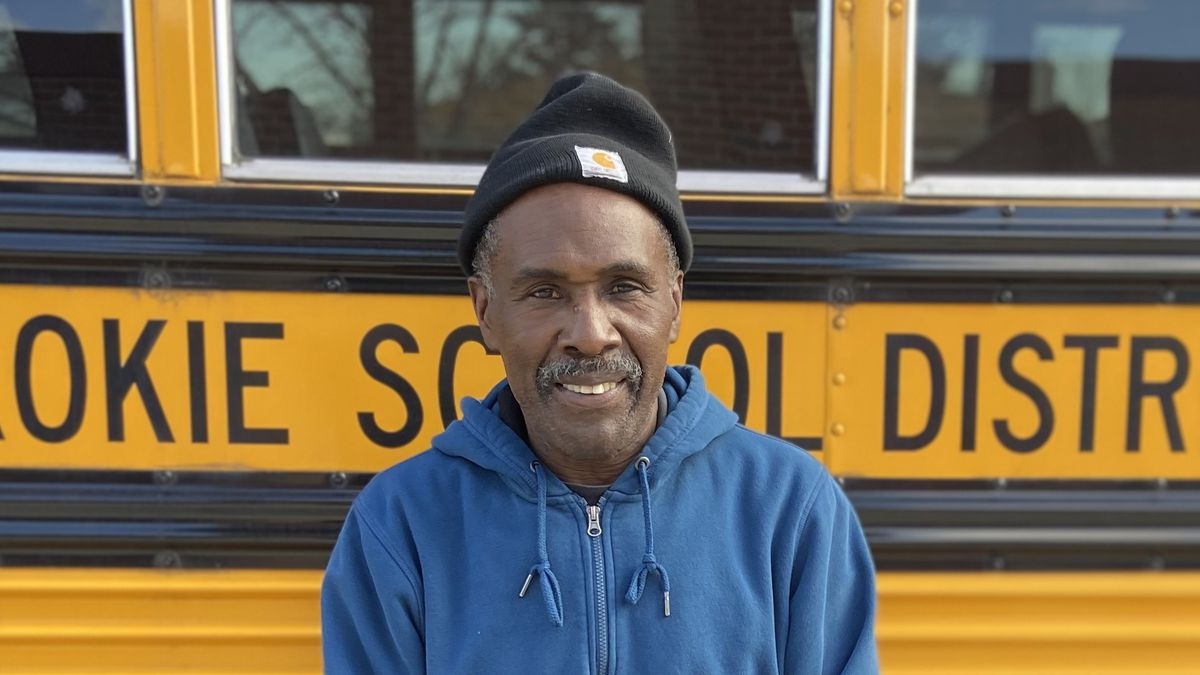 Your browser does not support the audio element.

Alvin Carter, a school bus driver and custodian in Skokie, Illinois, has become a trusted source of joy for the children he controls and his community.

When 5-year-old twins Fionnuala and Ceilidh Climer board the bus to school every day, they are greeted by a familiar voice.

Carter, affectionately known as Mr. Alvin by the twins, is a driver and caregiver at the girls’ school in Skokie, Illinois. Other times he greets them with, “Good morning, sunshine!” or a joke.

“He says, ‘Can I borrow your dress?’ And I say no, and I start laughing,” said Fionnuala.

Carter has worked at the Elizabeth Meyer School for 28 years. In that time, he has become a well-known figure in the community.

“Even before I knew him…I had heard about him from our neighbors, whose children were in high school and high school,” said Siobhan Climer, the twins’ mother. “They say, ‘Oh, if you go to kindergarten, you get Mr. Alvin!’ †

Conversations with the kids keep him motivated

Carter has been driving the bus for preschoolers for nearly three decades and he loves it. He said they make his day.

“The faces, the smiles, the greetings and all that sort of thing,” he said. “In the lunchroom it’s like we’re brothers and sisters, so it’s hard to really not be there.”

Carter has eight children of his own, now all adults. He said the kids on the bus reminded him of when his kids were in kindergarten, and he enjoys that.

In fact, he’s tried to retire over the years, but he just can’t bring himself to do it.

Besides missing out on those sweet faces, Carter said he can’t tear himself away from the interactions either.

“I’m in the lunchroom with them and it’s like I can’t leave,” he said. “I can’t even go out to lunch because we always have a conversation.”

Those conversations and those relationships were suspended when COVID-19 hit.

A few months after the pandemic, he heard that children and parents were concerned about him, so he accelerated the empty school bus and drove to their homes.

“I’d stop and I’d honk and they’d be at the window,” he said. †[I’d] show them I’m okay. There is now a little one on the bus, she used to stand by the window with her older brother and sister to wave at me, and that made me feel very special.”

And while some school districts in Illinois and across the country saw bus driver shortages when schools reopened, stopping was not an option for Carter.

From left to right: Fionnuala and Ceilidh Climer wave to their school bus one February morning.

While Carter and the Climer twins joke and talk about dresses, their mother, Siobhan, nurtures another aspect of their relationship as well.

When Fionnuala was 4 years old, she was diagnosed with neuroblastoma, a cancer most common in children.

Siobhan said the doctors were able to remove the tumor and Fionnuala is now doing great, but she still had to miss school for medical appointments when she started kindergarten last year. And Carter noticed.

“There was just a lot of empathy behind Mr Alvin’s eyes, even when he’s smiling and joking… And he’d say, ‘Well, tell her I miss her,’ and he’d honk for her, when she sat within.”

Students visit him years after the end of the bus rides

In addition to having fun, Carter sees it as his duty to motivate every kid on his bus.

“I would like them to be successful in life,” he said. “So if it starts in kindergarten, then it can continue.”

Carter claims no credit, but speaks with pride of some of his former students who went on to become doctors, nurses and engineers. He honks at them when he sees them, and they love to bump into him too. Although, Carter jokes that sometimes it can all be too much.

“When I go [to] Target, sometimes I have to try and hide because I see so many of them,’ he said. “You try to hide, but they come to find you anyway. They will find you. I don’t know how, but they know, ‘Oh, there’s Mr. Alvin’… I like it. I just love being around. That motivates me. That keeps me going.”

No matter what he tries, he just can’t hide. But really, as Ceilidh has seen, little stops him from chatting.

“He talks to people even when it’s a snowstorm or a rainstorm,” she said. “He always comes by and talks to everyone… He says good morning to the adults and the kids every day.”

This story is part of our Community Changemakers series. If you’d like to nominate someone who will selflessly bring joy and change to your community, share their story here.

Local pediatrician’s tips on how to avoid allergies

USPSTF guidelines call for screening kids as young as 8 for anxiety : Shots