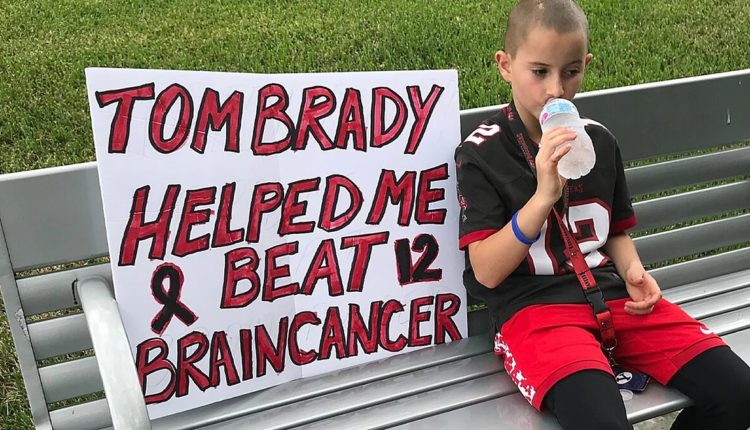 Noah Reeba started suffering daily headaches in November 2020. “The pains were so severe that he would vomit from the pain,” his father said James Reed, who guided his sleepless nights and recovery at Primary children’s hospital in Salt Lake City.

AN Tom Brady fan, the 10-year-old asked his parents to cut his hair with the Tampa Bay Buccaneers quarterback’s number (12). His wish came after his mother Jacques got the news that he had brain cancer.

It was early February. Noah had two surgeries within a week and a half, including a complete craniotomy. He then had a few weeks of chemotherapy and radiation until July.

The battle lasted almost seven months, with one source of inspiration – Brady.

Noah’s dream was to meet the six-time NFL Super Bowl champion. His parents say he imagined his life as a quarterback and copied Brady’s plays for… the patriots and pirates. And that he would even ask about him in the hospital.

“Will I be on time for training? Will I be ready on time for my game?” Noah said during each treatment, eager to get back to work with his former team.

“Noah would get away from the treatments, the injections, the pain and the fear,” his father James explained. “The Thought of Seeing” Tom Brady life moved him. It was what motivated him when he was depressed or in the hospital.”

The 10-year-old’s story reached Tom Brady thanks to the efforts of his parents. In March, his mother Noah surprised him with a video that gave him the strength to win his battle with cancer. It was Tom Brady, his hero.

“I want you to know I’m thinking of you. I am with you. My thoughts and prayers are with you and your family. Hang tough. You’re gonna be great, I know that. Get well and take care of yourself,” said the Buccaneers quarterback.

Noah has watched Brady’s video hundreds of times. “Every time he felt down, he looked to it to motivate himself,” James recalls.

A chance for life

In August, doctors received the last positive sign of his treatment: Noah rang the bell and beat the cancer battle. It was like celebrating a Super Bowl. His parents promised him to attend a Buccaneers game, and they delivered.

On October 24, Noah walked into Raymond James Stadium with a sign that read: “Tom Brady helped me beat brain cancer.”

The dream seemed to be coming true, but something was still missing: a salute from the Tampa Bay quarterback, who came into the stands and handed him a cap at the end of the game.

“It was something wonderful, wonderful. Brady is my hero. To see the person you look up to the most comes to you,” said Noah, convinced the cancer is gone and his dreams still stand.