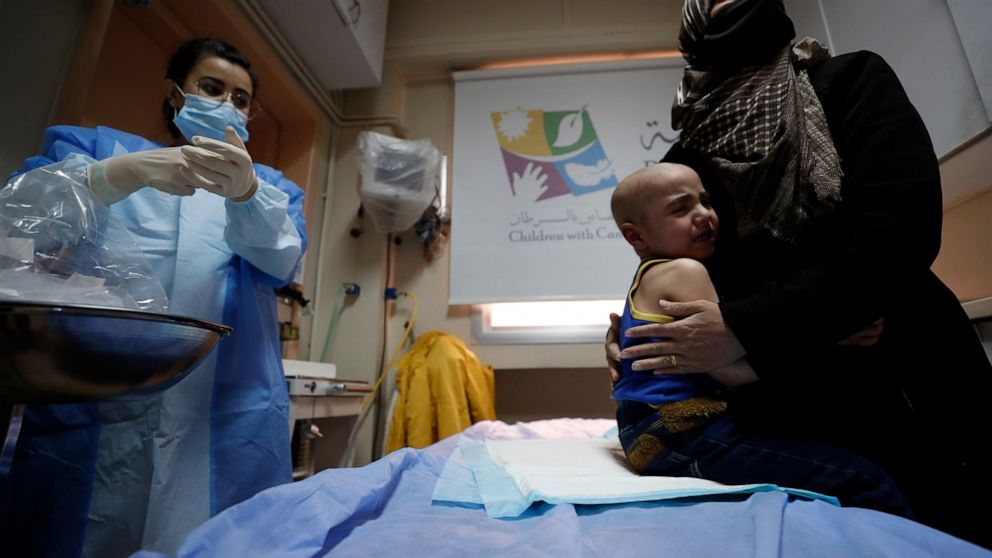 In war-torn Syria, a charity offers hope to kids with cancer

Beds are quickly filling up at a hospital ward in the Syrian capital run by BASMA, a private charity supporting Syrian children with cancer

DAMASCUS, SYria — In the pediatric cancer ward at a hospital in the Syrian capital Damascus, children walk through brightly colored hallways, hooked up to IV needles that deliver critical treatment into their bloodstream.

Nurses tend to have babies and teens receiving chemotherapy sit in recliners. Other kids draw and color in a nearby playroom to pass the time.

Beds are filling up fast at the branch of BASMA, a private charity that supports children with cancer. Today, it is the largest association in the war-torn country to offer full cancer diagnoses and treatment for free — and for many of Syria’s poor, that means treatment or no treatment at all.

More than a decade of war has brought Syrian health care to its knees. With an ongoing economic crisis, exacerbated by Western sanctions and a devastating currency crash, most families are struggling to survive.

Few can afford expensive cancer treatment. Hospitals, including Al-Bairouni Hospital on Harasta Highway, just northeast of the Syrian capital, and the Children’s Hospital in Damascus, are facing severe shortages of medicines and medical equipment.

Before the war, the Syrian government provided free cancer medicines in its public oncology facilities. But since the conflict broke out in 2011, these services have been disrupted. About half of the country’s health clinics were destroyed or closed during the war, killing nearly half a million people and displacing half of the country’s pre-war population. Oncological care declined rapidly.

“The doctor told us that medicines are scarce and that we have to buy most of it ourselves,” said a woman from the coastal province of Latakia who identified herself by her nickname, Umm Hamzeh, which means Hamzeh’s mother.

Her 14-year-old son was diagnosed with acute myeloid leukemia, an aggressive form of blood cancer in children.

“Life is very difficult,” she added.

For her and many others, the BASMA-operated cancer wards in Al-Bairouni and the children’s hospital were a rare refuge in a country exhausted by war and poverty.

“They welcomed us immediately, from day one, and took care of everything,” said Umm Hamzeh. In addition to treatment, the pediatric wards of Al-Bairouni Hospital provide shelter for parents of children from distant provinces, as well as psychological care for both parents and children.

“The ongoing conflict and economic downturn have taken a devastating toll on children’s access to health services in Syria for more than a decade, endangering the lives of thousands with potentially treatable diseases,” said UNICEF Representative Bo Viktor Nylund. for Syria.

“Fighting cancer and surviving is no small feat in any country, but a conflict zone is truly the worst environment for children with cancer,” Nylund added. He spoke last month after receiving cancer drugs for more than 4,000 Syrian children, a donation from the Kuwait Fund.

BASMA opened the first specialized unit to diagnose and treat children with cancer in 2008, with only 20 inpatient beds and able to provide services to eight outpatients in Al-Bairouni. At the height of the war, the hospital overlooked a front line between government-controlled Damascus and the rebel-controlled suburbs. Most beds were empty when cancer care declined.

Now 38 beds are available and the charity hopes to expand to 72 beds by the end of the year, said Suhair Boulad, president of BASMA, which treats about 650 children with cancer for free every year.

“We have a hard time getting these drugs, but thank goodness at BASMA we didn’t run out in one day,” said Boulad.

“Syrian children are just like all other children. They are entitled to full treatment if needed,” she added.

‘We’re trying to provide care focused not just on cancer treatment, but also on the psychological trauma they’ve experienced from war’