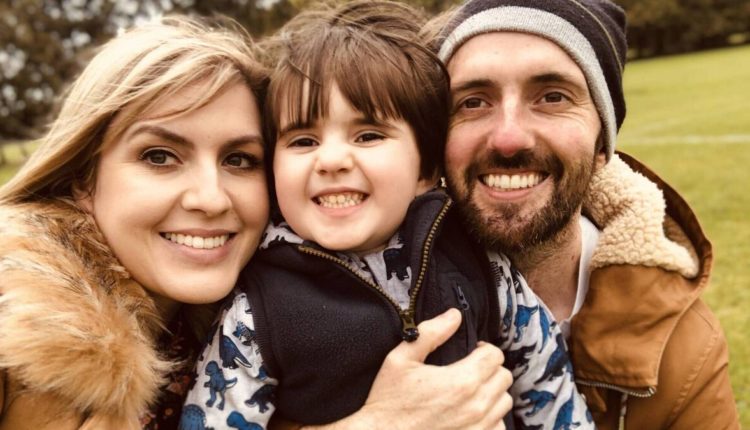 Yavanna, Lar and Oscar Keogh spent three and a half years as a young family in a “whirlwind” of joy and adventure.

As a young couple in their mid-30s, Oscar was Yavanna and Lar’s first child and was “the smartest boy imaginable,” says his mother.

“He was our first child and every day was magical with him.”

But towards the end of 2017, the Dublin parents started to get the nagging feeling that something wasn’t quite right.

“Everything was a symptom that could be written off as 50 or 60 other smaller things: inner ear infections, abdominal pain, allergies, speech and language delay — there was an answer and a reason for everything.”

But when Oscar started having recurring vomiting, his parents knew something wasn’t right.

They took Oscar to the family’s GP who advised them to go to Temple Street to “rule out the big things” and work from there.

“That was the last day of our lives as we knew it,” Yavanna recalls.

Yavanna, Oscar and Lar Keogh were a happy, carefree family before his diagnosis

When the family arrived in Temple Street the next day, everything happened with “speed,” says Lar.

That seemed like a good thing at the time, says the teacher.

The hospital initially performed a CT scan showing a mass on Oscar’s brainstem. The next morning an MRI was scheduled to confirm what the consultant had definitely seen: a tumor.

“The next day we got the news,” Yavanna says.

Oscar was diagnosed with a Diffuse Intrinsic Pontine Glioma (DIPG) tumor, for which there is no effective treatment and no chance of survival.

Yavanna and Lar were told that if their son did well with the treatments, he would live at most two years. The average expectation of a child with DIPG is nine months.

“It’s most shocking to hear that your child has cancer,” Yavanna says.

“But to be told in the same breath that he has stage four cancer and that he will not get better? Being told you have no options to fight it… it was life-destroying.”

Their whole world had collapsed in an instant, Yavanna says, but there was no time or space to process it.

“Oscar was waiting for us with no idea what was going on. He just expected his mom and dad to come back to take care of him.”

In the hours and weeks that followed, the couple said they came to an unspoken agreement about how to live life from now on — day by day, and packed with as much joy and love as possible in each moment. And for the next 19 months, that’s exactly what they did.

In July 2019, Oscar passed away just two months after his fifth birthday.

Oscar’s life and the impact he had on those who knew him inspired a new national childhood cancer charity.

Oscar’s Kids, which launched last month as part of Childhood Cancer Awareness Month, will have two parts: an Irish part, led by his parents, and an American part, led by The Big Bang Theory star Melissa Rauch and her husband Winston. Beige.

Melissa, it turns out, was Oscar’s “girlfriend.”

Melissa Rauch as Bernadette and Kaley Cuoco as Penny in The Big Bang Theory. Photo: Sonja Flemming/CBS via Getty Images

“We all watched The Big Bang Theory at home and Oscar really liked the character Bernadette,” says Yavanna.

“He just fell in love with her and one day he declared, ‘Bernadette is my girlfriend.’ That was it,” she laughs. “He had found his love!”

Yavanna and Lar contacted the actress online one evening in hopes that they could wave an autograph and make Oscar’s day.

“The next morning she answered us.

“She got the full cast to send him a video and sent him toys and treats.

“From that moment on, she was a best friend to him.”

In the last weeks of Oscar’s life, the actress was in daily contact with him, his parents say, sending messages and videos and being the “best friend” anyone could ask for.

After Oscar’s death, Melissa, who is herself a mother of two children under the age of five, remained in contact with Yav and Lar.

“One day she said, ‘Listen, my husband Winston and I have been talking, and we want to start a pediatric cancer charity in America, and we want to do that in the name of Oscar,” Yav recalled.

“In the very first days of the Oscars passing, when we literally lay on the floor in the pitch dark with grief… it was a light in that darkness.”

The couples decided to work together, as friends and as parents, and Oscar’s Kids was born.

Oscar’s Kids has two core ambitions. In the United States, the charity’s mission is to raise funds to support groundbreaking research to advance groundbreaking treatments for the rare cancer Oscar had. The charity has identified a research lab at Stanford University School of Medicine that specializes in DIPG, and the first money raised will be donated to this lab.

On this side of the Atlantic, the focus will be on bringing comfort and joy to the lives of children currently diagnosed with cancer.

Yavanna and Lar are eager to talk about their first large-scale fundraiser event, Oscar’s Kids PJ Party, which will be held simultaneously on both sides of the Atlantic on November 5.

On that date, the Keoghs ask adults, children, pets, and even stuffed animals and toys, to don their finest and best pajamas in honor of Oscar and all the children undergoing cancer treatment, and make a donation to charity.

We’re so excited to announce that Oscar’s first fundraiser is an Oscar’s Kids Virtual PJ Party on November 5th and you’re all invited! We will have lots of prizes to win so please join us in your best pajamas on the day to celebrate and support childhood cancer patients 💛 #OscarsKidsPJParty pic.twitter.com/rGxdb7TfX7

“Oscar found himself going through incredibly rough days after his diagnosis in his pajamas, which became his comforting and colorful uniform,” says Yavanna.

“We’ve seen firsthand the strength and courage of kids facing the most unimaginable things and their pyjamas became their superhero costumes…so it felt like a fitting way to celebrate them.”

Lar is in charge of involving schools, and the parents are also reaching out to businesses, in hopes that employees will be allowed to wear their pajamas for a day in the name of charity.

The money raised on the day will go to fund various charitable projects inspired by Oscar’s experiences in Temple Street. One such project is Oscar’s Magic Moments.

Oscar in his pajamas

“When he was irradiated, he had to be sedated for ten days in a row. The first day he didn’t know what was going to happen, but the second day he obviously didn’t want to do it again,” says Yavanna.

In an effort to distract him and give him something to look forward to, Lar came up with the idea of ​​a magic box that would sit on the table in the hallway outside the radiation room and contain a small gift that Oscar would give after his treatment. can pick up.

“For children, something very small can provide a distraction and give them a focus beyond the very difficult and incredible they will face on any given day,” Yavanna says.

In consultation with social workers and nurses at hospitals, the couple hopes to roll out Oscar’s Magic Moment boxes to all children undergoing grueling cancer treatments.

Prior to a heavy or challenging round of treatment, a form is presented to families and a child can choose a toy, book, and sweet treat that they would most like to receive.

“The idea is that we can make these dreams come true with the fastest possible turnaround time,” says Yavanna.

The couple has also come up with Oscar’s Kids Comfort Kits, which will include fun, distraction, and comfort items, such as toys and games, coloring and activity books, a book token, nausea tapes, and a neck pillow, and they want to give these kits to every child who is in Irish hospitals are being treated for cancer.

Recognizing that parents of children with cancer also need support, the charity also plans to develop a new safe place for parents on Temple Street’s St. Gabriel’s Ward, where parents can receive a diagnosis and updates in private and to withdraw for some time. just to process everything.

“It’s incredibly hard to get a diagnosis and it’s very, very hard as parents not to have a space where you can gather yourself or have a moment in private,” Yavanna says.

“And this happens every day, there are families like us who have a normal day, and then it just stops you in your tracks, I mean, we wouldn’t have thought in a million years that something like this would happen to us.

“One day we were a normal family and the next day we weren’t, and we are well aware that every day there are other families going through the same thing.”

Our conversation is interrupted by a boy. It is Teddy, their 6 month old child, who is teething.

I wonder if there was any hesitation in the decision to have another child.

“It was a very difficult decision to come,” says Yavanna.

“Now it seems easy because he is here and we know it was the right choice. But we had to do a lot of soul searching.

“We needed to know that we could be strong parents to another little person in the world who needed us to protect and love them.”

“We’re going to make sure Teddy knows everything about Oscar and that he feels his big brother’s feelings.

“That is a huge task for us. A little person will have to learn everything about someone very special and there are so many conversations that we will have to have, but we have to be brave because Oscar was too.”