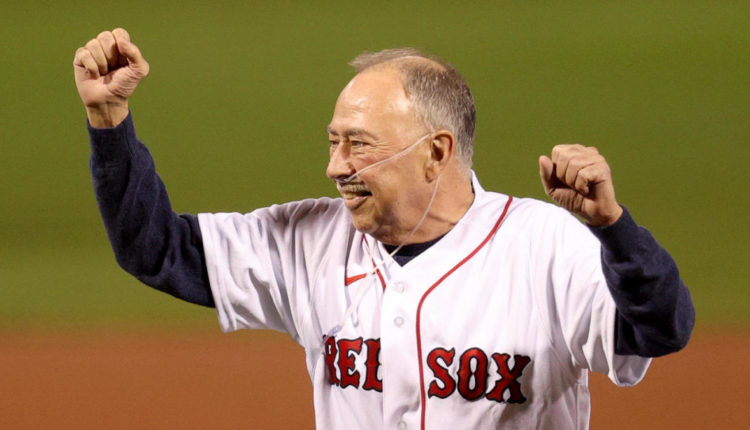 Jerry Remy, a longtime player and host for the Boston Red Sox, died Saturday night after a long battle with lung cancer, the team confirmed. Remy was 68 and would have turned 69 on November 8.

We are saddened by the loss of a beloved player, presenter and 13-year-old cancer fighter. Jerry’s love and connection to baseball allowed nothing between the game and him, including years of cancer. He has devoted his entire career to baseball, taking generations of emerging Red Sox stars and a myriad of fans on a journey, whether from his clubhouse seat or from his perch over the field in the broadcast booth. During his life, he witnessed great triumphs and terrible tragedies who handled everything with grace, dignity and a big heart. He left an indelible impression on this club and on an entire nation of Red Sox fans.

Remy was first diagnosed with cancer in 2008 and over the years several follow-up scans showed that the cancer had returned, most recently in 2018. As a precaution, he stepped down from a broadcast after shortness of breath on June 11 this year and August 4. he announced leave to undergo cancer treatment.

“A fun person to be around and an incredible human being just left us,” Red Sox legend David Ortiz said in a statement. ‘We’re going to miss you, brother. Thanks for calling me Big Papi in the Sky – I’ll never forget that. I miss you already, Rem Dawg.’

Remy’s most recent public appearance was earlier this month when he threw out the ceremonial first pitch ahead of the AL Wild Card Game at Fenway Park on October 5.

Like everyone else in Red Sox Nation today, I’m devastated by Jerry’s passing. I will miss all our conversations about the game and just the time together over the years, be it in the clubhouse or in the dugout. Jerry was so passionate about the Red Sox and even though he had to leave for treatment late in the season, he was with us every step of the way, especially in October. We kept in touch almost every day and encouraged each other to keep fighting. It was great to see him in Fenway as we started our run; he was an inspiration to so many of our players. My condolences go out to his wife, Phoebe, and his children and their grandchildren. We will miss you Remco!

“In baseball, he was a very, very hard worker. He made himself an excellent player. He carried over the same work habits to the broadcast booth,” Hall of Famer Carl Yastrzemski, Remy’s former teammate with the Red Sox, said in a statement. “We were a few lockers away from each other, so we talked a lot. We became really good friends. This is a sad day.”

After his playing career, Remy began broadcasting, where he did Red Sox games for the New England Sports Network in 1988. In 2008, the Red Sox held Jerry Remy Day at Fenway Park to honor his time with the team and 20 years in broadcasting. He was inducted into the Red Sox Hall of Fame in 2006 and the Massachusetts Broadcasters Hall of Fame in 2017.

“Jerry Remy joined the Red Sox in Massachusetts and lived his dream as a player and beloved broadcaster with the team,” the MLB Players Association said in a statement. “He forged a personal connection with Boston fans and inspired many with his battle with cancer. The Players Association, along with Jerry’s family, friends and fans, mourn his loss.”

Remy leaves behind his wife, Phoebe, and their three children, Jared, Jordan and Jenna.