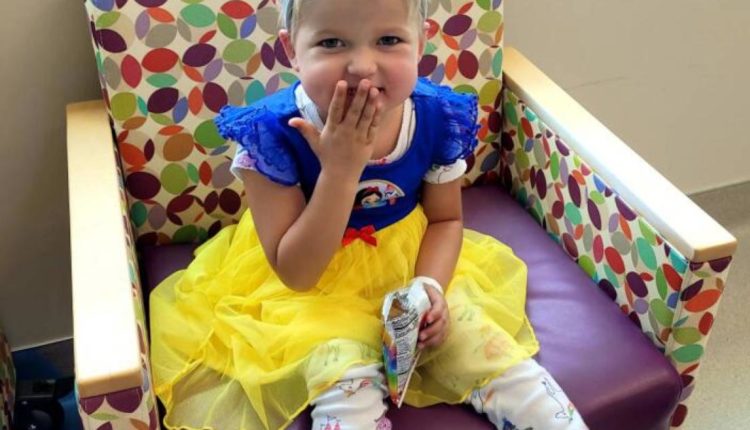 COLORADO SPRINGS – Just over a year since her leukemia diagnosis, a little girl and her family continue to receive strong support from the Colorado Springs community.

In August last year, 4-year-old Bexley Schumaker was diagnosed with ALL (Acute Lymphoblastic Leukemia). The community quickly rallied behind her and the Schumaker family and supported them on their cancer journey. In the meantime, because of all the support they have received, they have been able to support and give back to other families.

“It’s amazing to know that little kids, adults, people everywhere, give us the opportunity to help other people who might be having a hard time, and we can pay it forward,” Jenny said. “Although we are struggling, we have other people who support us so that we can support our family and our three boys who also need us.”

When Bexley was diagnosed with cancer last year, a family friend brought pink shirts to the family’s home to support Bexley. Pink is her favorite color and the shirts read “Bexley Strong”. Soon after, the family formed the Bexley’s Blessings Foundation and began selling pink t-shirts to raise money for childhood cancer research.

Since then, a sea of ​​people in pink t-shirts have walked from the neighborhood to Chinook Elementary School every Friday, and a year later the support has only grown.

“It’s just a great feeling to know she hasn’t been forgotten in a year,” says Jenny Schumaker, her mother.

“After a year you’d think, out of sight, out of mind like that, but the support never stopped, it never waned. At least it picked up speed,” said Kurt Schumaker, Bexley’s father. “But she’s surrounded by this whole community, and the school, like my wife, has bowed to this head fist, and they’ve been there every step of the way.”

Meanwhile, September is childhood cancer awareness month, and little Bexley was recently named an ambassador for Children’s Hospital Colorado. It’s a two-year commitment from the family to share and give back their story on their cancer journey.

“It’s just a great opportunity for our family to share her story and just the positive impact that giving back can help,” said Jenny, who said Bexley will represent other children like herself.

“She will talk about the hospital’s mission and be the face of the hospital to raise money for childhood cancer awareness and research.”

Bexley has now had a year of her three-year treatment and her family says her body is responding well.

“You can see she looks a lot better than the last time we had the interview. She’s got some hair back,” Jenny said. “She’s had a difficult year, a very difficult year that you wouldn’t want for your child, but she’s had a tremendous amount of support.”

Her family says she has been a fighter since day one, and they try to stay positive even on the tough days and celebrate all the little milestones with cake.

“She’s a tough little kid. The things she’s been through and the way she’s dealt with them is unbelievable,” Kurt said.

As for her latest title, Ambassador for Children’s Hospital Colorado, Bexley and her family will continue to help raise money for childhood cancer awareness and research.

“It gives us the opportunity to help other people who might be having a hard time, and we can prepay it,” Jenny said.

The family has sold more than 700 t-shirts through the Bexley’s Blessings Foundation. That money will go towards filling a pink wagon called Bexley’s Blessings with hundreds of toys. The gifts in the wagon are given to other children battling cancer to bring a smile to their faces.

Jenny also said that nearby children have set up lemonade stands for Bexley, and the community has also organized food and toy rides.