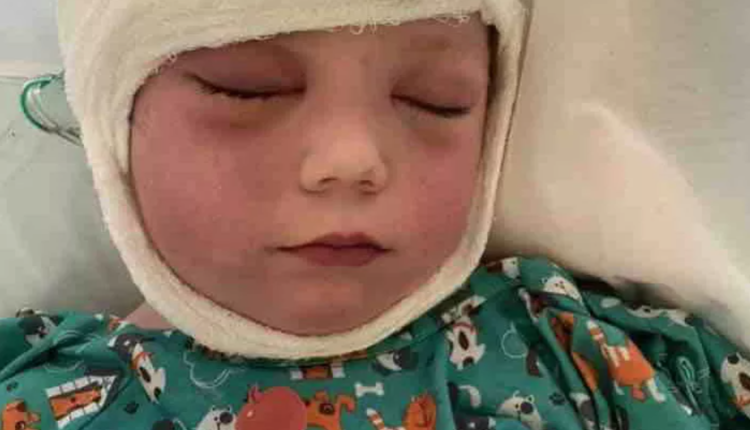 A local 3-year-old boy, Nathan Johnson, is fighting for his life after being diagnosed with brain cancer.

AN GoFundMe was started to cover the boy’s unexpected medical costs.

Johnson shares that Nathan’s first symptoms started in May.

“Well, he had some nausea and vomiting,” she said. Shortly after, she noticed that he started having problems with his balance and twitching in his face.

“I looked straight ahead at him from the couch and I could see his eyes were crossed,” she said.

After going to two separate valley hospitals where she was misdiagnosed, she took him to Rady Children’s Hospital in San Diego.

“They did the MRI and they told us it would only be 45 minutes… but two hours later… they still hadn’t returned it,” she said in tears. “The nurse called and said they had to do extra imaging.”

She says a neuroteam gathered and explained their son’s diagnosis: “He had a brain tumor. We never, never in our wildest dreams thought it would have been.”

Nathan was diagnosed with an incredibly rare form of brain cancer: craniopharyngioma. The doctors said he had a plum-sized tumor on his pituitary gland — the gland responsible for growth hormone and other vital functions.

Just a day later, Nathan underwent surgery in San Diego. The doctors said they were sure they had 99% of the tumor. But during the three-month follow-up visit, scans revealed two spots that indicated the tumor was still there.

“At four months… he’s still not himself,” Mandy said. He’s gained 30 pounds…he can’t physically do everything he used to do.”

But Mandy says little Nathan never gives up. His strong personality shines through. He still enjoys reading his books and even sings along with his parents between treatments.

Knowing that the tumor would likely grow back, they looked for more options. They turned to St. Jude’s Hospital in Memphis, Tennessee. After careful consideration, St. Jude accepted Nathan’s case.

The Valley family has been there for three weeks now. They arrived with the intention of starting Nathan on a treatment called “proton radiation.”

But before they could begin, Nathan suffered another terrifying setback: While sedated, he began to vomit.

“While they were trying to aspirate him and give him air… he started having heart problems. They had to code it. We were in the ICU all last week,” his mother said.

She says they are now waiting for Nathan to regain his strength before trying again. Their family prays that the radiation therapy will deliver the miracle Nathan needs to live a normal life.

Mandy explains that she hasn’t been back to work since May last year. She usually works as a nurse in the valley. Her husband Heith also had to take a lot of time off from work.

If you would like to contribute to help the family cover Nathan’s unexpected medical expenses and the future treatments the boy will need to recover, you can GoFundMe HERE.