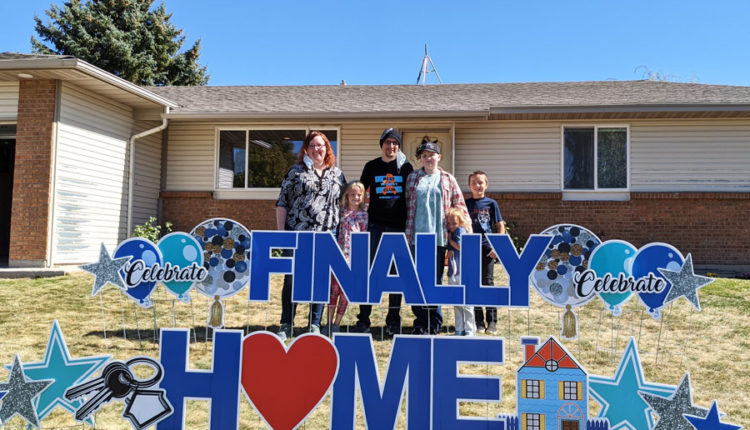 POCATELLO — When Sandi and Nathan Rowe walked into their newly renovated home in Pocatello on Saturday afternoon with their 13-year-old daughter Annalee, a surprise came out the front door.

“Oh my god, it’s like it’s someone else’s house,” you heard Sandi say from outside.

The Rowe family were re-introduced to their new home on Saturday, and while Sandi knew she could expect a remodel, she had no idea the entire house would be redone.

“I knew they were going to do stuff, but — I’m a Walmart girl and all these people aren’t Walmart people, so it was just so much more than I expected,” she told EastIdahoNews.com

With support from the entire eastern Idaho community, the Anderson Hicks Group, an Idaho Falls real estate company, completely renovated Rowe’s home while the family was in Salt Lake City.

The Rowes spent much of the summer 100 days at Primary Children’s Hospital, where Annalee was being treated for acute lymphoblastic leukemia, a cancer that originates in the patient’s bone marrow.

Annalee, who was diagnosed in December 2019, has undergone nearly two years of treatment, including a bone marrow transplant where she received a donation from her eight-year-old sister, Bellana.

Annalee’s grandmother, Sandi’s mother, Lani VanderBeek, is a real estate agent with Anderson Hicks Group and was instrumental in the remodeling process.

The six Rowes, including five-year-old Zaylia and 10-year-old Vander, previously lived in a two-bedroom duplex. But they found a house that suited them and were able to make a deal, buying the house for above the asking price without it ever coming on the market.

Not long after the purchase, VanderBeek took Kris Bertagnolli, Anderson Hicks Group’s chief revenue officer, on a tour of the home she called “well-used.”

VanderBeek described the house as straight out of 1977, the year it was built, with shag-style carpeting, yellow linoleum, yellow paneling, and classic yellow kitchen furniture.

“It was loved, but nothing had been updated,” she said.

According to VanderBeek, after Bertagnolli visited the house, knowing Annalee’s story, the company would “take care of” the house. VanderBeek assumed he was referring to cleaning, painting and perhaps new carpets. Instead, Bertagnolli collected donations and support from local businesses for a complete renovation.

Bertagnolli didn’t take shortcuts along the way, VanderBeek said, even pulling out of the Anderson Hicks Group coffers when the donated money ran out.

“I couldn’t believe it,” said VanderBeek. “I didn’t understand, and I still don’t.”

With labor and expertise donated by local contractors, walls were removed – moving the dining room through the house into Sandi’s dream bathroom.

Sermon Service and Electric donated about $15,000 in work to replace a piping system that had been incorrectly installed more than 40 years ago, VanderBeek said.

“The coolest thing about this is that not just our team comes together, but the community, too, for a girl they don’t know personally,” said Cami Empey, spokeswoman for Anderson Hicks Group.

The foundation of the house had problems that needed to be solved, as did the electrical infrastructure.

“We had contractors, great contractors, came in and donated work, donated labor,” said Bertagnolli. “It was Eastern Idaho. This was an event in eastern Idaho, which was really cool.”

Then came the furniture and appliances, donated again.

Nic Paz, of Pocatello Electric, said his company jumped at the opportunity to help the Rowe family. After discovering what the family needed five days ago, he was able to obtain the donation from Whirlpool and install all the appliances.

Jared Goody, of Ashley Home Store, said Ashley is always willing to participate in these types of events. The company donated a dining room set, two living room sets and other furniture.

“It was a no-brainer for us,” he said. “We are always looking for opportunities like this. When we heard the story and saw everything the Rowe family has been through, we jumped at the opportunity.”

Apart from all the beautiful fixtures, however, Bertagnolli was excited about one thing more than all the others.

Sandi said Annalee loved her room, as did her three siblings. But when asked who loved the remodel the most, Sandi admitted it probably was—although Lani waved her arms around as Sandi thought about it.

“They’re really excited about their bedrooms, they’ve been sharing them for so long,” Sandi said.

Sandi and Annalee don’t get much time to enjoy their new home before returning to Salt Lake City.

Last month, the Rowes learned that Annalee’s cancer had returned. Now she will undergo a newer treatment – CAR T-cell therapy, in which some of Annalee’s white blood cells will be removed and “coded,” as Sandi described it, to recognize and kill cancer cells.

“You use your own immune system to fight cancer. It’s a treatment that I think they’ve been working on for the past 15 years,” Sandi said. “Maybe someday it will replace chemotherapy.”

When asked how her family was coping during this difficult time, Sandi spoke with the support she has received from her church. Her Latter-day Saints ward gave her time and volunteered to take on the demolition of the home’s interior. They have also provided spiritual support to the family.

“They really (prayed for us) and we felt it,” she said. “Many people assume that this is the worst time of our lives. For me, I’ve had worse, not because the things that happened were worse, but because I didn’t feel those prayers behind us and didn’t support us — that’s what really gets us through it.”

The Rowe family, along with volunteers who made the house renovation possible, celebrate after the family tour of the house. | Kalama Hines, EastIdahohNews.com