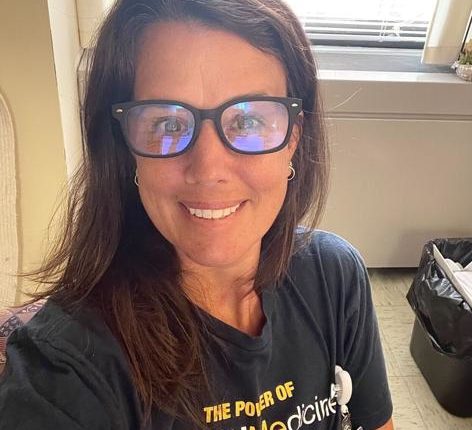 MARTINSBURG – Carrie Smith, RNC-MNN, has always had that innate quality that an outstanding nurse needs, that drive to care for others, balanced with the compassion and care that make for impeccable sleep.

It’s a quality that has led her to have been in nursing for nearly three decades and continue to look over and over for ways to become a better nurse.

“I have an aunt who is a nurse,” Smith said. “She’s retired, but once a nurse, always a nurse. I’ve always had that motherhood, ever since I was a little kid, wanting to take care of the human quality in me. When I graduated from high school, I thought, ‘This is what I want to do.’”

It’s what she’s done and continues to do, as Smith recently became the region’s first certified pediatric sexual assault investigator.

Smith has been a sexual assault nurse researcher since 2015 and serves as the SANE Program Coordinator for Berkeley Medical Center and Jefferson Medical Center. She trained on the pediatric side of SANE nursing in 2019 and recently earned her certification to become one of only 506 double certified SANE nurses in the country as recognized by the International Association of Forensic Nurses.

Smith’s path to where she is today is almost a fateful one, as she first trained as a SANE nurse simply because the program was offered for free in West Virginia through the Foundation of Rape and Information Services.

“Initially it was one of those things where it was offered through the hospital,” Smith said. “I didn’t know much about it. I have been a nurse for 26 years and have always been in maternal care, newborn.”

SANE, however, correlated with Smith’s interest in forensics, and the deeper she went, the more her passion was sparked, and she realized it was related to her work in the neonatal unit.

“The longer I was on it, the more I realized it coincided with my current job, nursing mother and newborn,” Smith said. “I saw a lot of it on both sides, and I thought, ‘We can do more to help these women, especially in our community.'”

From there, Smith became the SANE Program Coordinator at both hospitals, a way to help Eastern Panhandle victims in their own communities and state. Previously, victims had to go to Winchester for a sexual assault investigation because Jefferson didn’t have the resources to take the exam and Berkeley didn’t have enough nurses trained to have 24-hour coverage. Now both hospitals have 24/7 coverage.

Smith explained that West Virginia has a standardized kit for sexual assault exams, which is not the same as exams in Virginia. Having exams done in the area gives victims an easier path to court – if they choose to sue – and it gives victims easier access to local resources by already being connected to a Panhandle nurse .

“All of our care, especially with the nursing aspect of it, we treat the patient and their family holistically,” Smith said. “It’s very patient-oriented, patient-oriented. I’m not going to get into the thought, “I have to put this offender in jail.” I treat the health of the patient and his family. That’s important because we have all the local resources here, EPEC, Safe Haven. It’s just important to me to keep those victims in our community so we can treat them within our community.”

Smith serves on the Sexual Violence Response Team in both Jefferson and Berkeley counties, as well as Morgan County, among other boards and organizations related to nursing and sexual assault, including the multidisciplinary research team in all three counties.

“I kept saying, ‘We can do better than this for West Virginia,'” she said.

The pediatric side involves more specialized training due to the circumstances related to the nature of the incident and the age of the victim. Smith explained that the training allows nurses to better understand how to handle any situation involving younger victims.

“Not every pediatric patient wants to just come in and get a sexual assault exam,” she said. “You take a lot more time with those patients. You work with them, and you work with the family as well. You don’t want the family to leave here with the question, ‘Now what? What happens now?’ You have to advocate for them and make safety planning. Is that kid safe when they get out of here? Is the perpetrator one of their parents and can they not go home in that situation? It’s a lot of planning.”

She added that she has also faced many cases of abuse and neglect, having seen a spike since the COVID-19 pandemic, and in many of those cases the perpetrator is a parent or guardian – meaning that safety planning carries a lot of weight.

Smith also added that having the certification helps victims who decide to press charges and take legal action by making it easier for nurses to testify as experts.

“It’s like a stamp that says I know what I’m doing,” she said.

One of only two SANE coordinators in the state — the other in Morgantown — the pair are collaborating to write a course in pediatric training to provide access to training for local nurses to encourage more people across the state. to take the step.