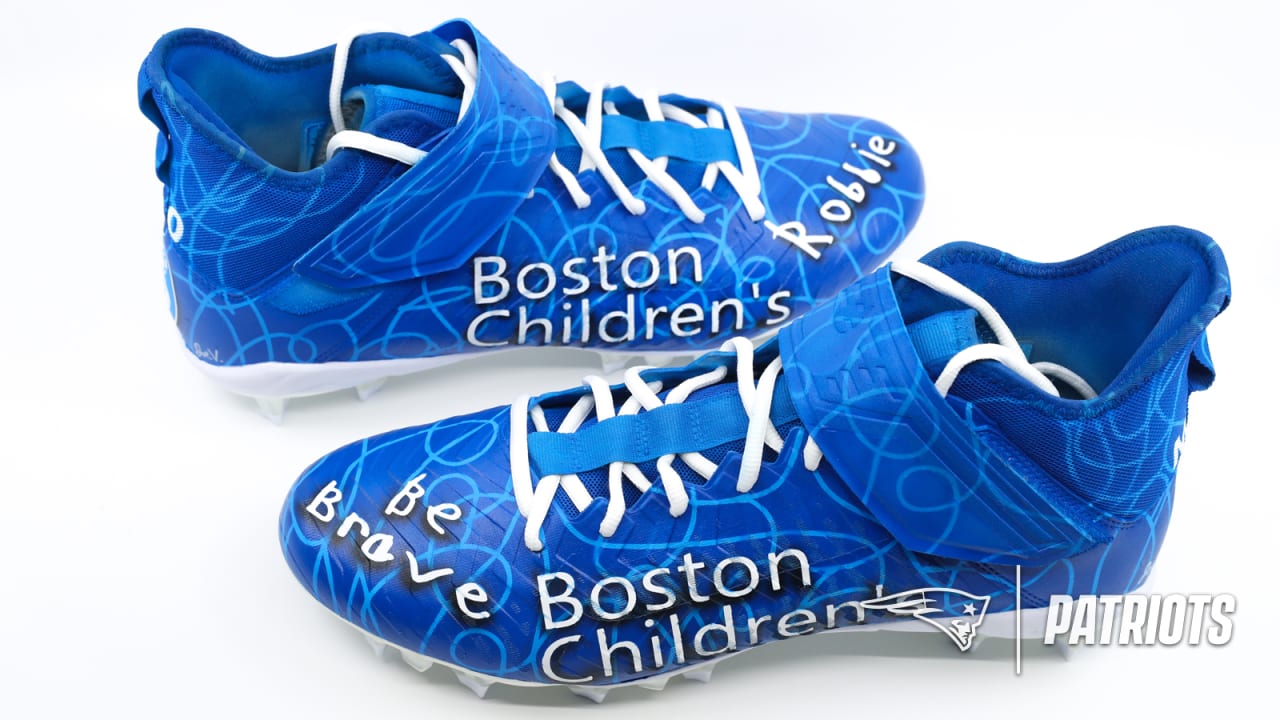 Mac Jones is still new to New England. While he has certainly found his footing on the football field, Jones is starting to dip his feet in the proverbial waters when it comes to charitable ventures, starting with My Cause My Cleats.

My Cause My Cleats is an NFL initiative that allows players, coaches and staff to represent organizations that matter most to them through custom cleats. After week 13, all cleats will be available to purchase through NFL Auction, with all proceeds going to the respective nonprofits.

When Jones takes the field on December 6, he will represent Boston Children’s Hospital wearing bright blue cleats. Next to the BCH name, one shoe reads ‘Be Brave’, while the other bears the name of a new friend, Robbie.

Robbie is a 7-year-old boy with haemophilia A, a blood disorder in which his blood does not clot properly. He is a cheerful, active and determined boy who loves golf and tennis, as well as swimming, but Robbie is not allowed to play organized football, one of his favorite sports.

If Robbie can’t play there himself, the best bet is to be there with Jones in spirit.

Though they haven’t met yet, Jones wanted to make sure Robbie becomes a prominent part of his My Cause My Cleats.

“It’s going to be great because I’ll eventually get the chance to meet him and hang out with him and stuff,” Jones said. “For now I just wanted to make sure I had something, you know, for my purpose, my cleats… to represent him a little bit and show that I’m playing for him because he can’t play football. It seems like he’s just a real fighter.”

Robbie is basically a fighter. Despite being in and out of the hospital, he always has a smile on my face and is ready to help others. To have “Be Brave” next to his name on Jones’ cleats is just fitting.

Although Jones has just started his New England charitable efforts, working with children’s hospitals is not new to him. While at the University of Alabama, he grew close to Zay, a 14-year-old boy battling cancer when they met. Zay passed away in February, but Jones still carries that bond with him. He hopes to build the same kind of friendships here in Boston he did with Zay.

“This is another opportunity for me to show that relationship that I want to build with someone and I think it’s just important to realize your situation as an NFL player, you’re healthy and happy. And there are other people who would love to do what you do. And I think it’s a good way to bridge the gap between the kids who fight every day, like us.”

Given its history with children’s hospitals, BCH was an obvious choice. With the season still in full swing, Jones said this is just the beginning of their relationship with the hospital and, of course, Robbie and his family.

“There’s a children’s hospital everywhere, but I think Boston’s is really important with what they’re doing,” Jones said. “They’re one of the best in the world. I’ll get the chance to get even more involved, but I think this season will help bridge the gap.”

As a rookie, Jones is of course taking part in My Cause My Cleats for the first time, and he’s just excited about what it means to take to the field Monday night against the Bills representing BCH and Robbie.

“This one is going to mean a lot. Being in Boston is a cool situation for me, where I’m kind of new to the city. I just wanted to be able to help someone in the neighborhood, show I care,” Jones said. “Honestly, I play for something bigger than myself, like many other players do. I think it’s a really great opportunity.”

You can check out Jones’s, as well as the rest of the participating Patriots, cleats in the gallery below.