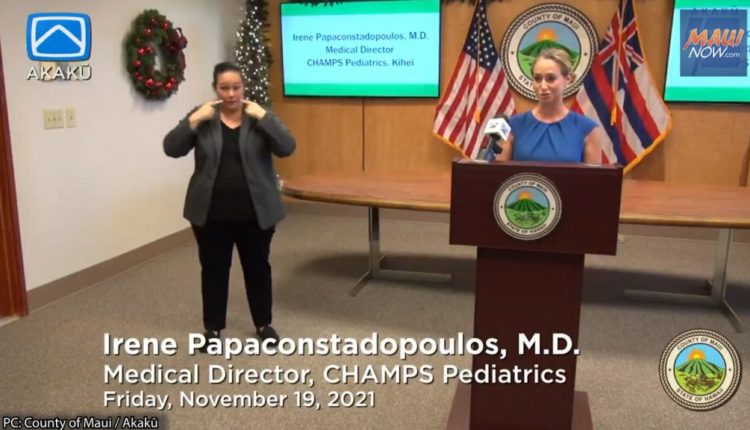 dr. Irene Papaconstadopoulos, MD, medical director at CHAMPS Pediatrics in Kīhei, where she works as a private pediatrician, said: “As a pediatrician and mother of two boys in this age group, I expected a lot of excitement that we have already seen, but also a lot of questions and concerns, which are reasonable from parents.”

She commended state and provincial officials and the Department of Health’s Immunization Department for the rapid distribution of the vaccines after obtaining approval for emergency use.

“In my office, I have personal experience, but given the offices of other pediatricians, clinics, pharmacies, and the hospital, we’ve already vaccinated hundreds of children on Maui with the first dose, and we’re seeing no ill effects,” noted Dr. Papaconstadopoulos at a press conference hosted by Maui Mayor Michael Victorino on Friday.

dr. Papaconstadopoulos said that, as expected, she gets a lot of questions from parents, and weighs in on the most common issues below:

If children don’t often get seriously ill with COVID-19, why should they be vaccinated?

dr. Papaconstadopoulos addressed what she called a “misconception” that COVID-19 in children is rare and not common as it is in adults, or severe. She pointed to figures collected in recent studies.

“From the start of the pandemic, to October 2021, approximately two million cases of COVID-19 have been confirmed in the 5-11 age group to date. There are probably more than that. We now know from studies that by measuring neutralizing antibodies in this age group, children are just as likely to get COVID-19 as adults,” said Dr. Papaconstadopoulos.

“We have had 8,300 hospitalizations in the US in children aged 5-11 years. A third of those required pediatric ICU admission. Two-thirds of those had comorbidities, the most common of which were asthma and obesity. And a third of all those hospitalizations were previously healthy children,” she said.

To put things in perspective, the total number of children aged 5-11 in the US is about 25 million. “The total number of deaths per year in that age group prior to COVID is about 2,000-2,300 in total. That’s a total number — and the most common cause is accidents in this age group, congenital heart defects, birth defects and neoplasms (cancer),” said Dr. Papaconstadopoulos.

She described this age group as a healthy age group, saying: “She is not expected to be hospitalized or die. The total number of deaths from COVID-19 from the start of the pandemic in this age group is around 100. That currently places COVID-19 as the eighth leading cause of death in children aged 5-11. It is more serious, more common than bacterial sepsis.”

“Some people may not remember it, but before we approved the meningococcal vaccine that we routinely give to 11-year-olds, we had about eight confirmed deaths per year in that age group from meningococcal sepsis or bacterial meningitis. So no amount of death is acceptable in this day and age as long as we have an effective and safe vaccine,” said Dr. Papaconstadopoulos.

How effective is this vaccine?

As for the risks, said Dr. Papaconstadopoulos that this age group has the unique risk of being the highest risk for MIS-C – that is Multisystem Inflammatory Syndrome in children, with the most common age presentation being 9 years old.

She noted that MIS-C presents itself about 2-4 weeks after infection with COVID-19.

“Now these children may not have had severe COVID-19. They may have had very mild symptoms – fever, cough, congestion – and 2-4 weeks later we see it’s a response from their immune system, causing a systematic inflammatory response. There is inflammation in multiple organ systems, including the heart, causing a condition commonly known as myocarditis. So kids with MIS-C – 60-70% of them needed pediatric ICU and 1-2% of them died. The total number of MIS-C cases from the start of the pandemic was 5,217 in October 2021 — and 40% of those cases were in children aged 5-11,” she said.

“A study is currently underway to look into this. I don’t think there is a GP who hasn’t seen how many mental health problems COVID-19 has caused in children,” she said.

“We can now say that the risk of COVID-19 is comparable to the pre-COVID flu figures. So it has the same risk as the flu prior to COVID for kids this age,” said Dr. Papaconstadopoulos.

The FDA authorization for emergency use was based on the results of a clinical trial involving approximately 4,300 children, ages 5-11.

“So what they did is they vaccinated about 3,000 of the kids and got about 1,500 a placebo. They compared the neutralizing antibody titers in this age group to the neutralizing antibody titers from a larger study in 16-25 year olds, and they found that at 1/3 the dose they had an equivalent response — an equivalent production of antibodies. Because the research was done during the Delta wave, we know that it also protects against the Delta variant,” said Dr. Papaconstadopoulos.

The vaccine, she said, is 90% effective at preventing COVID-19 infection.

“I thought it was interesting that 9% of the children in this study already had antibodies – they already had COVID – so they tolerated the vaccine well. It even boosted their immune response,” said Dr. Papaconstadopoulos.

Side Effects: How Safe Is It For Kids?

During the study, the children were monitored for side effects, and they continue to be monitored two months later.

“Traditionally, we know that the most common side effects of vaccines will be detected within the first two months after vaccination. That’s why they set that limit. In medicine, there has to be a decision at some point about when we know enough to protect the rest of the decision,” said Dr. Papaconstadopoulos.

“In that number of children, the side effects were generally mild to moderate. There were less frequent side effects than the 12 years and older. The most common was pain at the injection site (approximately 70%); 40% experienced fatigue; 28% headache; 12% muscle pain; and about 10% reported chills with a fever,” she said.

“This study had no cases of myocarditis, but the total number of participants, 4,000, is quite small to show us very rare side effects. That’s why they continue to monitor,” said Dr. Papaconstadopoulos.

“The vaccine itself has caused in young male adults — and the risk is about 54 cases per 1 million doses of the second dose of the vaccine administered to men ages 12-17. And almost all of those cases resolved completely without lasting leaving consequences,” she said.

dr. Papaconstadopoulos said the FDA, the American Academy of Pediatrics, the Infectious Disease Society of America and multiple health organizations endorse this vaccine “because the overall benefits outweigh the risks.”

“Everything we do and every decision we make has a risk and a benefit, and right now it’s clear that the safest way to protect our children from the complications of COVID, and as Dr. [Lorrin] Pang said earlier: we don’t know how much we will see in the future, the safest way to protect them now is to vaccinate them. The risk of vaccinating right now is lower than getting COVID in this age group,” said Dr. Papaconstadopoulos.

During her speech, she urged parents to discuss these topics with their pediatrician and primary care physician and make the decision that is best for their families.

My mysterious bruises and “low iron” were not rare cancer.