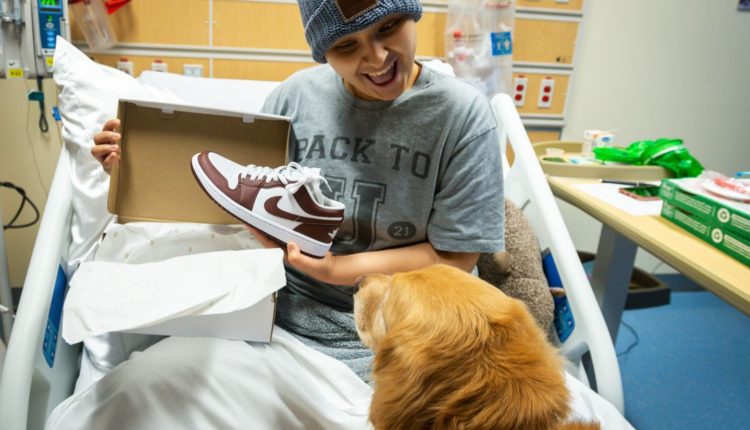 Before the Mavericks announced their 2021-22 NBA season on Thursday night in Atlanta, Luka Doncic had one last job off the field in Dallas.

“I really wish I had been there to meet and talk to the kids, but hopefully this surprise put a smile on their faces and encourage them to stay strong,” Doncic said in a press release.

“I just want all the kids and parents to know I’m thinking of them!”

Luka surprised 80 patients at Children’s Health today with a pair of Jordans, a Jordan drawstring bag, hoodie and socks, a letter and autographed photo & pizza with pepperoni designed in 77s.

Sweet photos (via Children’s Health) of some of the reactions. pic.twitter.com/8NgaKmKSJZ

Each patient admitted to the Pauline Allen Gill Center for Cancer and Blood Disorders at Children’s Health received a pair of Jordan sneakers, a Jordan drawstring bag, hoodie, and socks, as well as a letter from Luka and an autographed photo.

In addition, individual pizzas — with the number 77 written in pepperoni — were given to each patient and his family. (Pizzas were custom-made to meet each child’s preferences and dietary specifications.) Pizzas were also provided to nurses and other staff who worked on the floors and assisted with deliveries.

“Luka’s generous donation to Children’s Health for the patients in our Pauline Allen Gill Center for Cancer and Blood Disorders has been fantastic,” said Brent Christopher, president of the Children’s Medical Center Foundation.

“These patients on both our Dallas and Plano campuses are fighting hard against their illnesses and often require long hospital stays. That means you’re missing out on many of the child’s everyday joys. Receiving these items from Luka brought a big smile to the faces of our patients.”