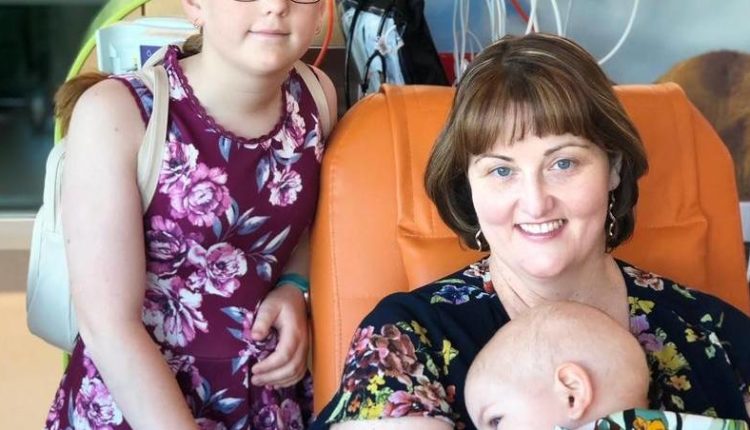 When her two-year-old son Jamie was diagnosed with cancer, Nicky Sherlock had to leave her family and move from the countryside to the city.

“He was a very healthy farm boy who never got sick, but he started complaining of a sore stomach, didn’t eat and just felt pretty miserable,” Ms. Sherlock told AAP.

After initially being told he had bowel problems and tonsillitis, Jamie was diagnosed with leukemia in September 2019 and started treatment and surgeries straight away at Perth Children’s Hospital.

“From there, it’s just a whirlwind of torturous things that happen to your child,” she said.

“I had to leave my daughter with my mother and father because I was in the hospital for a long time and she went to high school. My husband had to stay to work. It was a very big disruption in all our lives.”

To stay with her toddler, Ms Sherlock moved from the regional town of Boddington to Perth, a two-hour drive away.

She stayed in Perth for a year and says the cancer treatment and time apart had a “huge” impact on the whole family, mentally and emotionally.

After not being with her mother, Mrs. Sherlock’s daughter Jess developed severe anxiety, including panic attacks.

Sometimes she can be jealous that her brother takes precedence over her.

“It has damaged our relationship so much,” said Ms. Sherlock.

“It’s very hard to explain to her that he needs me right now more than what she does. Saying that to one of your children is terrible.’

Mrs. Sherlock suffers from post-traumatic stress disorder and is constantly in “fight or flight” mode.

Despite this, no mental health care was offered to the family after Jamie’s cancer diagnosis.

Ms Sherlock is one of approximately 10,000 Australian parents, children and siblings missing essential support after a childhood cancer diagnosis, charity Redkite has found.

“In Australia we have the best medical care for children with cancer and that’s where the focus is on medical survival,” Redkite chief executive Monique Keighery told AAP.

“What that means is that other serious consequences of childhood cancer are second to none and in many cases they are hidden. There are big gaps and we need to do more.”

The charity released its Hidden Health Crisis report on Wednesday, based on a survey of 700 parents and carers of children with cancer, which found that two-thirds of families are not getting the emotional and mental support they need.

People living in remote or regional areas are disproportionately affected, with the greatest gaps in support being found after a child’s cancer treatment has ended or during a death.

Some parents feel isolated due to a lack of connection with other families experiencing childhood cancer, and about 2,500 siblings of children with cancer do not get the help they need.

“There are a lot of things people don’t think about when a child is diagnosed with cancer – the family divorces happen immediately, the family income is reduced almost overnight – besides having a really sick child,” Ms Keighery said.

The pandemic has led to unprecedented demand for Redkite’s services and the charity is calling for more government funding.

“Childhood cancer is a complex trauma and it needs specialist support, with experts in pediatric oncology. We are well positioned to provide that support,” said Ms Keighery.

“We offer a number of programs that need to be expanded and expanded, particularly to help families transition home after treatment.

“For every family we help, there’s more we can’t do right now.”

Jamie is now four and still has a year of treatment to go, while Jess is doing well in a home school environment.

With the help of Redkite, the family has received counseling and financial support.