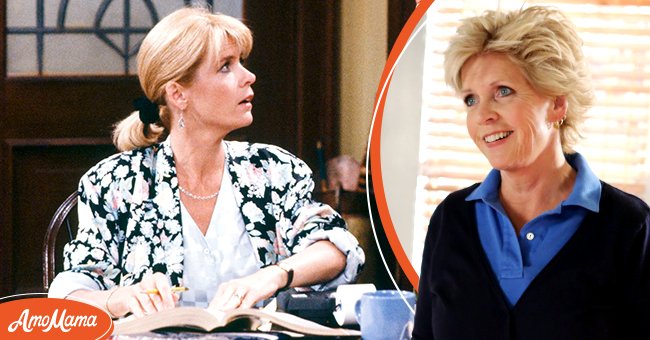 Meredith Baxter once admitted that she hated her big breasts and believed her cancer was a blessing in disguise; she has since written a book and starred in a movie about breast cancer.

Meredith Baxter is a sitcom veteran best known for her role as Elyse Keaton in the 1980s sitcom ‘Family Ties’, which followed her big break on the sitcom ‘Bridget Loves Bernie’ in the early 1970s.

She played Catholic teacher Bridget Fitzgerald on the show from 1972 to 1973. Baxter then appeared on “Family” from 1976 to 1980 as Nancy Lawrence, a divorced mother.

Although Baxter’s acting career was mainly on television, she starred in a few films during her early career, including a horror movie called “The Cat Creature” and in the drama “The Stranger Who Looks Like Me.”

Baxter became a memoirist later in life, when she published her autobiography “Untied: A Memoir of Family, Fame, and Floundering” in 2011.

In her memoir, Baxter wrote about her struggle with alcohol while filming “Family Ties,” her family life, her battle with breast cancer and coming out as a lesbian on the show “Today.”

Baxter has been candid about her life experiences in several interviews, especially her relationship with her fuller chest and how cancer affected her life.

The actress disliked her breasts, as she told Page Six that they were the “plague of my life” during her early TV career, as TV executives made lewd comments and looked at her breast.

She explained that others may think it would be good to have people who “desire for you.” She considered it an aggressive act because she was turned into a sexual object. Baxter told the outlet:

“That’s not lust, that’s aggression. “Let me take your power by turning you into a sexual object. Then you can’t even open your mouth.”

In 1999, Baxter battled breast cancer. However, she described the illness as a blessing in disguise, as she had to undergo a breast reduction, which for Baxter was one of the perks of cancer.

Her experiences with cancer were helpful when she portrayed Joyce Walder in the movie “My Breast.” Walder edited the teleplay for the film from her own book.

The film starred Baxter as People writer Walder, and it followed her journey with the discovery that she had breast cancer, was undergoing chemotherapy, while juggling the men in her life.

Baxter was able to draw on her real-life experiences with breast cancer to portray Walder and the emotions that come up when dealing with cancer, such as being diagnosed and undergoing treatment.

She also mentioned that she did not use a body double during the breast exam. However, an actual doctor examined her chest during the scene rather than the actor cast as the doctor.

Baxter gave insight into her decision not to have a body double for the intimate scene during an interview with The Washington Post. She explained that it was essential to show the whole woman:

The film came out on CBS in 1994, and since then Baxter has led a busy life, which has included writing and publishing her book, discovering her sexuality, and getting married.

Before meeting and marrying her wife, Nancy Locke, Baxter was married three times and welcomed five children. She first married Robert Lewis Bush in 1966, when she was only 19 years old.

The couple had been together for three years before breaking up in 1969. Their divorce was ratified in 1971. During the three years they were together, they had two children, Theodore and Eva.

She later married her “Bridget Loves Bernie” costar, David Birney, in 1974. They were married for 15 years and welcomed three children, Kathleen and twins Mollie and Peter.

Baxter’s third husband was the late screenwriter and novelist Michael Blodgett, whom she married in 1995. The couple divorced in 2000.

During her second marriage, Baxter struggled with relying on alcohol to ease her unhappiness. She wrote about her experience with alcohol in her book and also discussed it during several interviews.

In 2011, Baxter said she struggled with drinking during her “Family Ties” days, as she would have a glass of wine on the way home from the set. She shared:

“I would drink from the Family Ties studio all the way home. I didn’t stop drinking until marriage [to actor David Birney] was over.”

She explained that alcohol “started to serve a purpose” because she was miserable and had nowhere to express her emotions. So she turned to alcohol.

Baxter sobered up in 1990 after a producer commented that she thought Baxter had an alcohol problem because her eyes were glassy and no one understood what she was staying with.

She then enrolled in a 12-step program to “turn people off” [her] back.” It took ten years before she received “the gift of despair” and threw herself into the program and was able to focus on the work she had to do.

MEETING LOCKE AND COMING OUT

Fifteen years after she was sober, she got a call from her future wife. Locke had “thought it would be a good idea to be sober,” and a mutual friend encouraged her to contact Baxter for help.

The couple met for coffee and immediately started a friendship. Baxter realized she was a lesbian in 2002 after having her first relationship with a woman.

She told Locke about her identity because she wanted to be honest about how she formed the friendship. However, it was not yet public. In 2009, she appeared on “Today” sharing her sexuality with Matt Lauer and the world.

After informing Locke about her sexuality, their coffee gatherings turned into nights out and watching movies. In 2006, the friends admitted that they had romantic feelings for each other.

Their friendship turned into a relationship. However, Baxter was still wary of her emotions due to her previous marriages and was nervous about how her audience would react to her sexuality.

Their relationship ran smoothly for a few years until the couple decided to attend a lesbian cruise in 2009. Baxter did want the media to reveal her relationship, so instead she appeared on TV and announced it herself.

Public fame brought the couple closer. In 2013, after the Defense of Marriage Act was overturned, Locke and Baxter decided to get married, which they did on a cold December day.