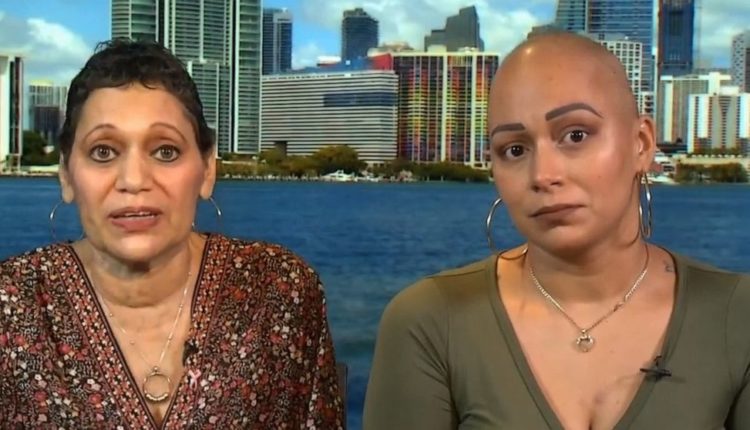 Imagine you are a mother who has been diagnosed with breast cancer, and months later you discover that your daughter has also been diagnosed. This is the reality two mother-daughter duos have faced over the past year.

Sonia Jeffers and her daughter, Mysean Powell, of Savannah, Georgia, and Diana Serano and her daughter, Miriam Fajardo, of Miami, opened on Wednesday on “The View” about the unexpected journey of the fight against breast cancer side by side.

dr. Elizabeth Comen, a breast oncologist at Memorial Sloan Kettering Cancer Center in New York, was also on hand to shed light on their situation.

She went on to say that “between 10% and 20% of women who have been diagnosed with breast cancer have a first-degree relative who has had breast cancer,” and that “about 5% to 10% of those women will have inherited a known genetic mutation.”

Sonia Jeffers and daughter Mysean Powell open on Wednesday, October 27, 2021 on “The View” about a breast cancer diagnosis.

Jeffers, a 53-year veteran with two daughters, went to her routine mammogram in 2020 and later received a letter telling her to come back to the office. After another series of tests, her doctor called to inform her that she tested positive for breast cancer.

“I just screamed to the top of my lungs, ‘No, no, no, not me,'” she said on “The View.” To make matters worse, she lost her job the same day she was diagnosed, which put a “great financial strain” on her and the family.

Because Jeffers’ diagnosis carried the BRCA2 gene, Powell and her sister had an increased risk of developing breast cancer.

While her mother urged her to get tested, Powell went and eventually found out she had breast cancer. “It was scary because at 32 you don’t hear about breast cancer, so I collapsed,” she said.

“To find out my child had it, I had to make sure she survived whether I got through it or not,” Jeffers said.

“To have someone there to understand everything you’re going through — the pain, the pain, the fatigue — it was definitely a blessing,” Powell said.

Powell started chemotherapy in October 2020. She told “The View” that young women should examine themselves monthly to check for abnormalities because “who knows[s] your body better than you?”

After receiving treatment, Jeffers was deemed cancer-free on October 19, 2020, and a bell rang to signal the end of her treatment. Nearly a year later, on October 14, Jeffers’s doctor told her that the breast cancer had returned and had spread to her stomach.

Her doctors now say her stage 4 cancer is terminal.

Despite the news, Jeffers’ message to those living through metastatic breast cancer is: don’t give up. “Just because I have a prognosis of terminal cancer doesn’t mean you have to give up life and give in to the prognosis. Fight to stay alive, even if it’s terminal,” she said.

Diana Serano and daughter Miriam Fajardo will open on Wednesday, October 27, 2021 on “The View” about a breast cancer diagnosis.

Serano is a 60-year-old mother and grandmother who also went for her routine mammogram in 2020 and everything turned out to be healthy. Nine months later, she felt a lump in her breast and was diagnosed with breast cancer.

“When I heard that my results were positive, it was a very scary feeling,” Serano said. “I thought of my children, my grandchildren, my mother.”

Her daughter, Fajardo, was with her when the diagnosis was made. “It was very emotional, but at the same time I was very optimistic,” she said. During her mother’s diagnosis, she also felt a lump in her breast and “decided to become a lawyer” for herself and get a mammogram.

Serano knew her daughter was at her doctor’s appointment and decided to call her. “When she answered the phone, she just said, ‘I’m okay, Mom, I’m okay.’ So I knew right away that it wasn’t right,” she said.

Because Fajardo is only 30 years old and her mother had been diagnosed with breast cancer three months earlier, she said the diagnosis came as a “huge shock” to her. “A positive mindset, it’s extremely important,” she said.

“My mother and I, we know and understand that we will have bad days and that’s okay. That doesn’t mean you’re not strong,” she continued. “She lifts me up and I lift her. We are each other’s rock.”

“We lift each other up,” Serano said. “On my bad day, Miriam lifts me up. On Miriam’s bad day I pick her up.’

Sonia Jeffers and daughter Mysean Powell, and Diana Serano and daughter Miriam Fajardo tell in “The View” that they have breast cancer months apart.

After six rounds of chemotherapy and immunotherapy, Fajardo was deemed cancer-free and the bell rang to celebrate.

To help with the financial hardship these women went through during their breast cancer treatments, the woman-owned company and sponsor 84 Lumber of “The View” donated $25,000 each to Jeffers, Powell, Serano and Fajardo.

“It will certainly help,” Jeffers said in response to the surprise. “We are really grateful.”