Mother with skin cancer warns others to avoid sunbeds 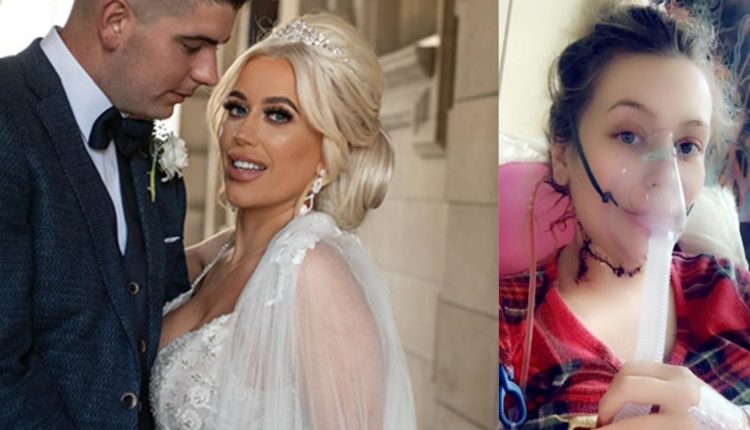 Like so many young women, Tazmyn Patterson felt better with a tan.

“I thought I looked leaner and more glamorous, so the more tanned the better,” says Tazmyn, now 30, who lives in East Belfast with husband Jordan and their young family.

“From the age of 16 I used a tanning bed for 15 minutes at a time up to three times a week. I also used tanning accelerator cream. Everyone I knew used tanning beds – family, friends, it was just the norm. Now I look back and think that what I did was ridiculous.”

“It’s so weird to think I might not see the kids grow up,” she says. “Normally about 30 percent of people at this stage of melanoma survive five years and if I get five years I would be very happy. Some days, when I feel good and strong, I tell myself I will be to beat the odds and i will be the wondrous success story Other days i feel very down and wonder if i will see Dillyn go to high school How many Christmases will we have My goal is just to last as long as possible to live if I can.”

Read more: Woman shares terrifying mental health journey to help others: ‘I heard voices in my head from age 11’

It was in October 2014, when she was only 23, that Tazmyn had a small mole removed from the back of her neck after it had become crusty and raised and began to bleed occasionally. Two weeks later, her dermatologist told her she had skin cancer, but Tazmyn says she didn’t take the diagnosis seriously.

“I cringe at how naive I was,” she admits. “I had absolutely no idea and when I was told that the mole was ‘positive for melanoma’ and that I needed more surgery, I didn’t even know what that meant. As far as I was concerned, the mole was gone, so I had nothing else after all. to worry about? I was so blasé and told everyone it could be cut out and it would be fine.”

After the surgery – which left her with a 12cm scar – Tazmyn went on with her life, with regular skin and mole checks. She stopped using tanning beds, and in the summer of 2019, she and Jordan were thrilled to find out she was pregnant with their third child. The couple got married and life looked positive. But a month after their wedding. She felt a hard lump in her neck.

Read more: ‘I Thought I Threw My Baby Down’: A Mother’s Struggle With Postpartum Psychosis

“I froze with fear,” she says. “Although I was told there was always a risk of the melanoma coming back. I really believed it was in the past. The next day an ultrasound and biopsy revealed that the melanoma had come back and was in my lymph nodes, meaning the Stage 3. My first thoughts were for my son I was 16 weeks pregnant and was devastated to learn that melanoma can cross the placenta, not only was I at risk now.

“In November 2019 I had surgery to remove the affected lymph nodes, but tests showed that the cancer was spreading quickly and I was advised to give birth to our son prematurely at 30 weeks. He almost died of a hemorrhage, but he is a little fighter and pulled through.”

Tazmyn Patterson and her husband with their son. (Delivered)

Scans showed that Tazmyn’s surgery had been a success. But unfortunately, she suffered serious side effects from the drug she was given to prevent the cancer from returning and she spent much of 2020 in and out of the hospital.

“My mental health deteriorated and I was terrified that the cancer would return,” she says. “I was flipping through old photos of myself wearing a mahogany brown and couldn’t believe how stupid I’d been.”

Read more: Vogue model who lost sight of cancer shares how she learned to love herself without a prosthesis

Unfortunately, the cancer returned in April 2021 and scans showed it in Tazmyn’s lungs, brain, spleen and liver.

“It’s devastating, but I’m under immunotherapy to help my body fight it,” she says. “My daughters know I’m sick but believe the doctors will make me better and luckily my son is oblivious. Jordan has been my rock and moments when we all watch a Disney movie together means the world for us.Last month I celebrated 30th birthday with friends and family and it was a great night.I believe in taking every chance I can to enjoy life.

“Now I always wear SPF50 and share my journey on social media to raise awareness. To all tanning users I would say, ‘This is not worth a tan. Protect your skin, you only get on the skin and I wish I could could go back in time and shake myself'”.

Watch: A woman who claims to be the one-night stand who saved Sean Lock’s life in the 90s says she saw he had skin cancer