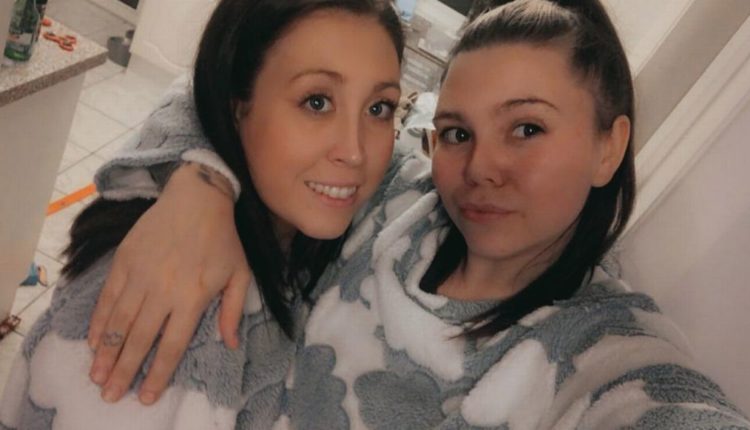 Amie Walton, 29, is due to start life-saving cancer treatment within four weeks. Her family and best friend have launched a #AmiesArmy charity event to raise money

Amie Walton, 29, (left) must start £35,000 treatment within four weeks to give her the best chance of survival (

A mother-of-two was diagnosed with stage four colon cancer after seeking GP support for consistent heartburn.

Amie Walton, 29, is to start £35,000 treatment within four weeks to give her the best chance of survival after the cancer has spread to her liver and lungs.

Her friends and family have raised a charity in an effort to give Amie a form of radiation therapy called SIRT (Selective Internal Radiation Therapy), which is believed to be her only hope, Birmingham Live reports.

After her diagnosis in September 2020, Amie – who has two young children – underwent chemotherapy and 60 percent of her liver removed, but unfortunately the cancer returned.

Just before Halloween 2021, she received the heartbreaking news that the cancer had traveled to her lungs, was terminal, and there was nothing more doctors could do. Her children Harry and Mia are seven and five.

She’s been told a form of radiotherapy called SIRT (Selective Internal Radiation Therapy) could potentially allow her to watch her children grow up – but it’s not available on the NHS and costs £35,000 to have privately.

Amie with her young children Mia and Harry (

To stand a chance of success, this treatment has to be done in December – so now Amie’s fiancé Chris Mills, her family and best friend Jess Davies have vowed to race against time to get the money to save Amie’s life.

“Growing up, you expect your parents to go, so prepare for that, but you never think you’re going to lose your best friend, that kids are going to lose their mother,” said Jess, 30, who is close to Amie. lives in Sutton Coldfield.

“Her children Harry and Mia are little dreams, they are amazing,” added Jess, who is the godmother of both children.

“We were supposed to get together for Halloween, but Amie had just been told she was on palliative care and she didn’t feel like it, so I said I’d take the kids trick or treating.

“I was doing Mia’s makeup and I saw Harry go up to Amie and say, ‘Are you going to die?’ with a tremor in his voice And Amie said, “I am, but I’ll keep fighting, okay?”

“Harry broke his heart and Amie was sitting there hugging him. I looked at Mia and she had one tear falling from her makeup. I told her ‘she’ll be fine’ and winked, and she grinned at me.

“Amie’s fiancé Chris was sitting there with his head in his hands. That’s why we have to do everything we can to help them. They want to do this surgery in December, so we basically have four weeks to save her life.”

She and her family are crowdfunding for treatment (

SIRT is a form of internal radiotherapy used to treat secondary and sometimes primary liver tumors that cannot be surgically removed. While not a cure, it may prolong her life and allow her to undergo further treatment.

A JustGiving page has been set up which has already raised over £21,000.

Amie, who will turn 30 in January and is looking forward to marrying engineer Chris, said: “Words cannot describe how grateful I am for all the people who have donated. Without them it would not be possible for me to get the treatment I need.

“I’m begging people to keep sharing and donating. I’m not ready to go anywhere, I want to stay with my babies.”

From noon to late, there will be DJs, face painting, bouncy castle, raffle, date auction and more to try and raise as much as possible for Amie’s treatment.

Amie is ‘not ready to leave her babies’ (

Former cafe worker Amie’s symptoms were easily ignored, as she thought she just had severe heartburn, similar to what her mother and grandmother had suffered from over the years.

“She tried tablets, but they only worked for a few hours and then it came back,” Jess said. “I finally persuaded her to go to the doctor and she was sent for a scan.”

At first, doctors thought that Amie had a blood clot, but then they called her urgently and told her it was cancer.

“I’ll never forget that day,” said Jess, who works in corporate defense. “Amie texted me, ‘It’s bad news. I have cancer. I can not talk. They can’t do anything. Talk later.’

“I dropped my phone and fell to the floor. I was angry she couldn’t call me. So I got up and went around. She was sitting there and when I walked in she just collapsed with her head on my shoulder.

“It was at that point that I said I’d keep going until it’s the last thing I do.”